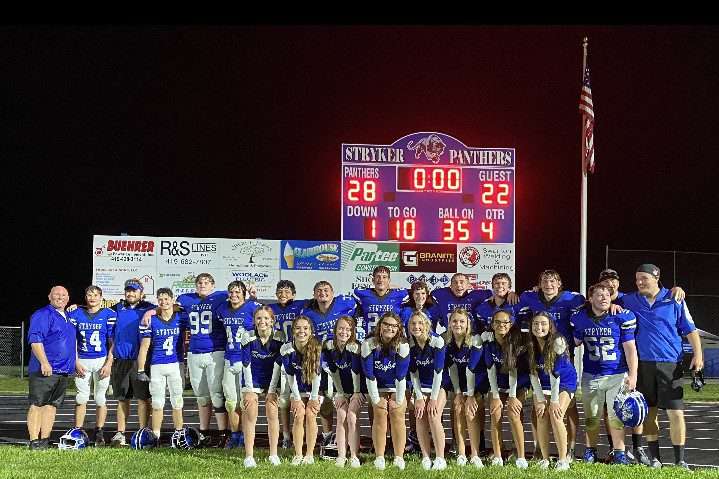 HISTORIC WIN … Stryker football players, cheerleaders and coaches gather in front of the scoreboard following a 28-22 win over Danbury. The victory was the first home win in program history. (PHOTO PROVIDED)

High school football made a triumphant return last Friday with fans, student sections, and bands bringing an atmosphere to the games that was missing in 2020. Some takeaways from week one action.

The consensus is the Bombers will put points on the board this season and they didn’t disappoint in week one. Edon rolled up 509 yards of offense led quarterback Drew Gallehue who threw for 414 yards and five scores in a win against Edgerton.

A question mark for Edon this year was on defense, but they looked much improved in the opener at Edgerton, forcing three turnovers including returning an interception for a touchdown.

While the Indians were voted the preseason favorite in the NWOAL, Shawn Moore’s team faces the challenge of replacing All-Ohio performer Connar Penrod. Sophomore Elijah McCleod was up to the test in their opener at Fairview as he had 227 yards passing with four touchdowns.

GAMES TO WATCH IN WEEK 2:

The Rams look to bounce back from a heart-breaking loss in the final seconds last week at home versus Liberty Center. In order to avoid a 0-2 start, the Rams will need to slow down a Wauseon team who put up 40 points last week against Fairview.

On the Wauseon side, Tinora will be a step up in competition as the Rams are the favorite to win the GMC this year and are expected by many to make a playoff run. New Indian signal caller Elijah McCleod will be facing a stout Tinora defense as his top priority will be to get the ball to the Wauseon playmakers at wide receiver.

Each of these teams put up 49 points last week so the scoreboard figures to get a workout. This game features a tremendous matchup at quarterback with Edon veteran Drew Gallehue and Antwerp sophomore Carson Altimus. This game could very well come down to who has the ball last.