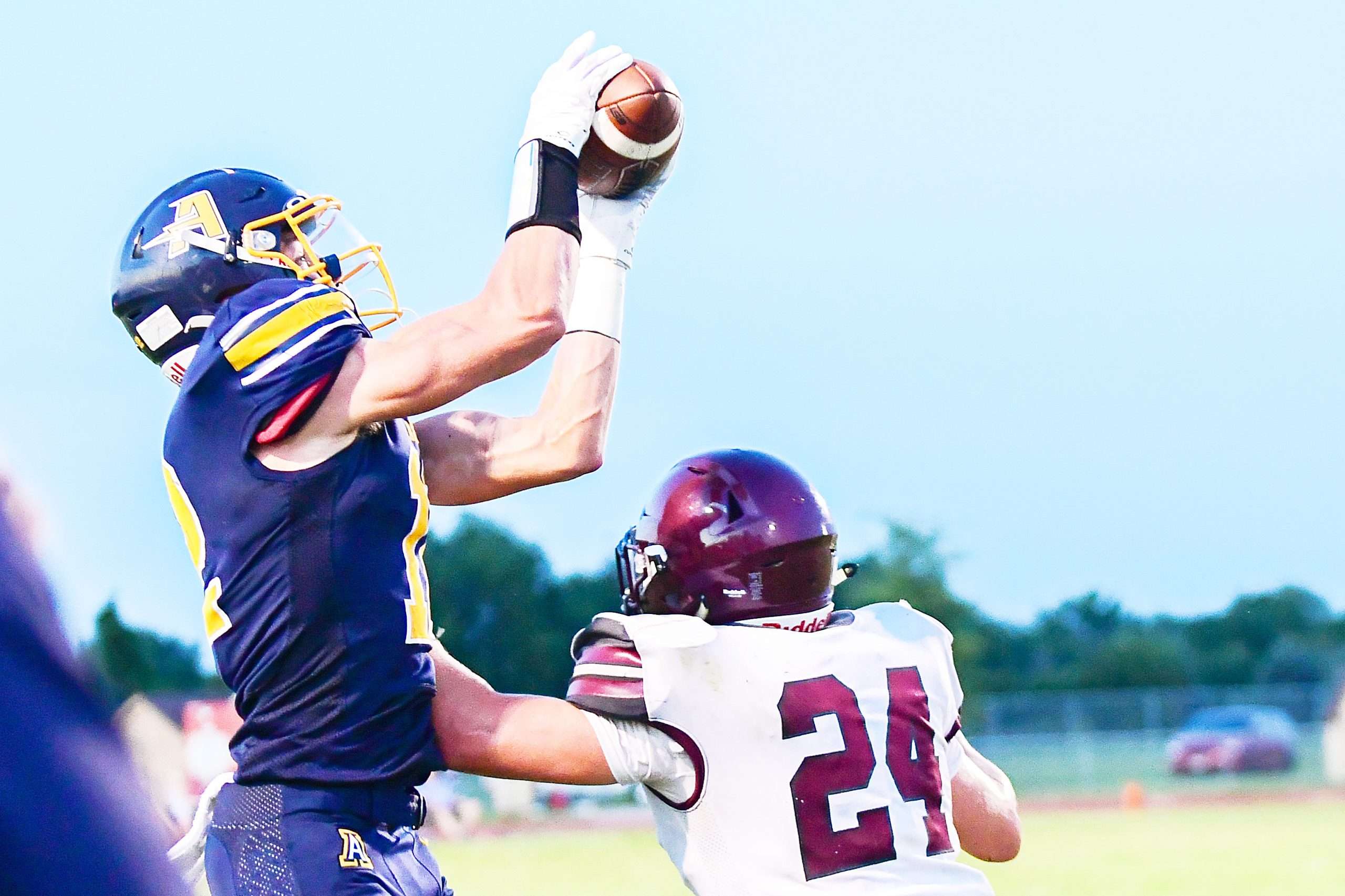 CATCH OVER THE DEFENSE … Archbold wide receiver Chase Miller catches a pass along the sideline in a season opening win over Genoa. (PHOTO BY LINDSAY PHILLIPS, STAFF)

The halfway point of the season is upon us already and there’s plenty on the line in week five. Among the most intriguing matchups is in Henry County as a pair of state ranked teams will tangle when Archbold visits Liberty Center.

The Green Meadows Conference also features one of the better games in the area as Ayersville invades Edgerton.

It’s another Archbold-LC matchup with league title implications and playoff points on the line at Rex Lingruen Stadium.

The teams met twice last season with the Bluestreaks winning the regular season contest 41-7, but it was Liberty Center taking their playoff meeting 38-35 in the regional semifinals.

Both teams won their respective league openers last week as Archbold earned a hard-fought win over Bryan 28-14 while the Tigers steamrolled Wauseon 40-6.

This game will feature two of the premier running attacks in Northwest Ohio with Archbold relying on single running back to carry the load while Liberty Center uses a three-pronged attack.

Carson Dominique is Archbold’s go-to-guy as he currently leads the NWOAL in rushing with 577 yards on 85 carries and 11 touchdowns.

Archbold has had more success in the passing game then the Tigers this season led by first-year starter Cade Brenner who leads the NWOAL with 868 yards on 57/83 passing and six touchdowns.

On defense, Gabe Chapa leads Archbold in tackles with 38 while Trent Kruse and Matthew Orr each have 28 stops for the Tigers and cornerback Landen Kruse is tied for the league lead in interceptions with three.

It’ll be an early season showdown in the GMC as Edgerton and Ayersville come in a 1-0 after getting wins to open league play last week.

After starting the season with a heartbreaking 22-19 loss at home to Delta, the Pilots have won three in a row for first-year coach Andrew Mickey.

In those three wins, Ayersville has outscored their opponents 116-55, including a 47-15 trouncing of Paulding last week.

Quarterback Corey Everetts is the straw that stirs the drink for Edgerton, who is number one in the first computer rankings for Division VII Region 26 that were released this week.

Through four games, Everetts has ran for 357 yards, passed for 727, and accounted for 16 touchdowns for the Bulldogs.

Kadyn Picillo has emerged as Everetts’s favorite target in the passing game with 16 receptions for 341 yards and five touchdowns.

Everetts is also a key component of an Edgerton defense that is allowing just 10.5 ppg leading the team in interceptions (4) and is second in tackles (20.5).

Bryan looks to bounce back from a loss at Archbold while the Panthers try to carry the momentum from a win over Evergreen on a field goal as time expired.

Bryan has faced a formidable schedule so far with their two losses coming to Archbold and Van Wert, both state ranked teams.

The Bryan offense so far has centered around quarterback Jase Kepler and running back Ayden Pelz. Kepler has run for 296 yards and thrown for 511 yards while Pelz has 311 yards on the ground on 46 carries.

Kepler and Pelz have combined for 15 touchdowns so far this season for the Golden Bears.

Delta is off to a 3-1 start thanks to some late game heroics with a late defensive touchdown to lift them past Ayersville in their season opener and then a field goal at the final horn to beat Evergreen last week.

The Panthers offense starts with and ends with a running attack averaging 221 yards a game led by Jeremiah Wolford with 478 yards on 73 totes and seven touchdowns.

It has been an opportunistic defense for Delta as they have forced nine turnovers led by five interceptions from the secondary.