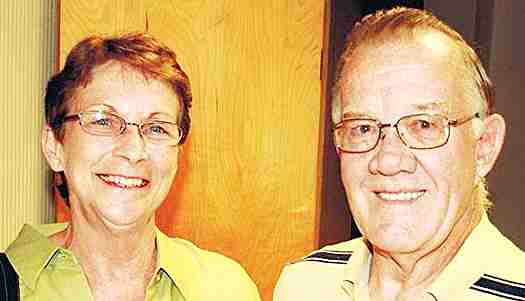 Norm worked at Chamberlain Hardwood Lumber in Pioneer for many years. He then worked at McCarthy Tire and was later a manager of Easter Tire in Bryan. Norm was a member of the Bryan Lions Club for many years.

He was awarded the Melvin Jones Fellowship award. This award is in recognition of commitment to humanitarian service and is the highest honor in Lions Club.

He was a member of Trinity Lutheran Church and was an avid Ohio State football fan and fisherman.

Darlene was a homemaker. She attended New Life Worship Center and was a former member of the Bryan Eagles Aerie 2233. She enjoyed sewing, crafting, garage sales and spending time with her grandchildren.

Norman was born on Nov. 14, 1940, in Bryan, Ohio, the son of William and Iola (Moog) Chamberlain. Norm was a graduate of Stryker High School. Darlene was born on Dec. 9, 1944, in Edgerton, Ohio, the daughter of Bernard Joseph and Henrietta Helen (Miller) Goebel.

She was a graduate of Edgerton High School and was their first Homecoming Queen. They were married on July 10, 1987, in Bryan.

Private graveside services will be held at Maple Grove Cemetery in Edgerton. The children of Norm and Darlene Chamberlain would like to welcome friends and family to join them for a memorial visitation beginning at 11 am on Saturday, September 17th at New Life Worship Center located at 14451 CR C, Bryan, Ohio. Beginning at noon there will be a casual meal and fellowship to follow for those that would like to stay and share stories, laughter, and your favorite memories of Norm & Darlene!

Arrangements are under the care of Krill Funeral Service, 860 West Mulberry Street, Bryan.

The family requests memorial donations to the Bryan Lions Club. To sign the online register or to send condolences, please visit www.krillfuneralservice.com.