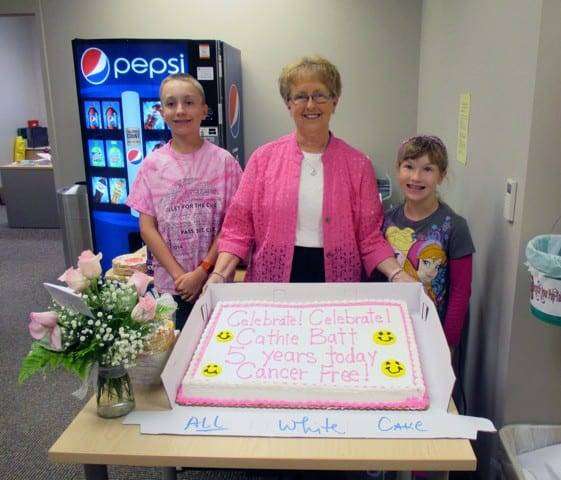 Schools are built with solid materials to hold them together. At Hilltop, they also have a special glue that binds the students and staff… that glue being High School Secretary Cathie Batt. On May 12, 2015, she celebrated five years cancer free and Hilltop celebrated with her.

Getting a surprise past her was no easy feat, but students and staff showed up Tuesday morning wearing pink in all shades to show their support of her battle and her victory of five years beating cancer. A cake, balloons and flowers were also included in the surprises.

Cathie started at Millcreek West Unity Schools in August of 1984 as the assistant treasurer. When Norma Grine had to go on disability she was asked if she would step in as High School Secretary, which she did in February of 1986. She is celebrating 31 years as an employee of Hilltop Schools.

Diagnosed in March of 2010, Cathie had surgery on May 12 of that year. She recalls her doctor said the day of your surgery is your start of being cancer free. After surgery she had 8 sessions of chemotherapy and then 33 treatments of radiation. Her last treatment was the day before Thanksgiving and she felt extra thankful that year.

In 2013, she was named Williams County Relay for Life Survivor of the Year. She is still active in helping with the fight against cancer.

A 1969 Hilltop graduate, Cathie has spent most of her life in the school. She recalls being nervous at first because she didn’t know the students and was almost afraid to have someone come into the office. That’s all changed now, as students know they can seek her out for all kinds of questions and problems.

Cathie is married to Maurice and they have a daughter Christie (Matt) Hoffman. She has three grandchildren; Ian, Ingrid, and Isabella. The older two are also Hilltop students.

She can be found at most ball games, concerts, plays/musicals etc. She said sometimes she’s asked what student she’s there for. She said “I’m here for all of them…they are ALL my kids”. And over the years she’s been another Mother to an estimated 1500 kids. And they all love her right back and are thrilled she is a cancer survivor.

Monica can be reached at monica@thevillagereporter.com

Be the first to comment on "Hilltop Celebrates Cancer Free Cathie"