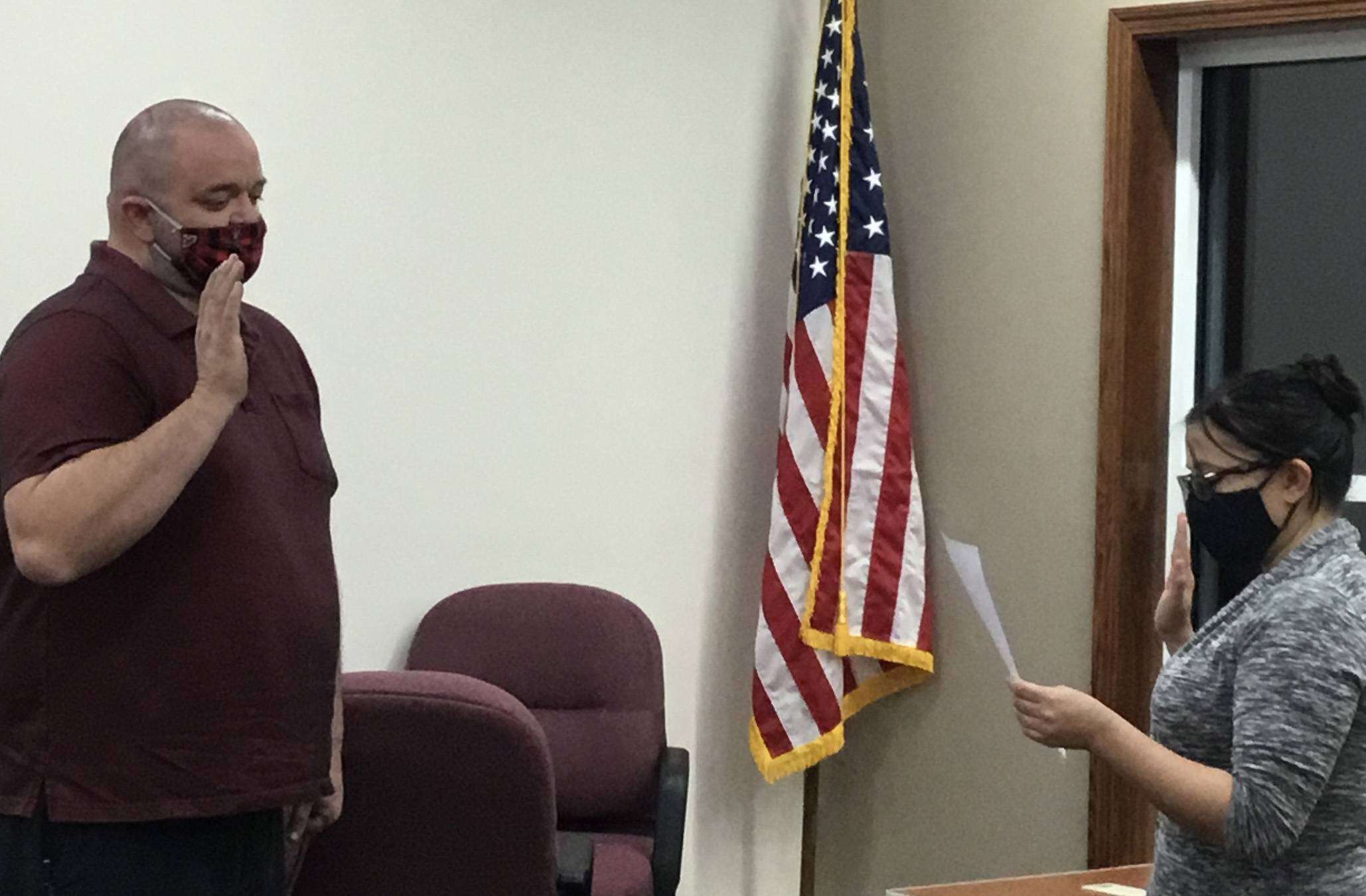 During the November 19, 2020, Holiday City Council meeting, a number of important things took place. As Holiday City resident count is low, it has been a struggle to keep enough people on the village council to keep it able to conduct the business of the town. Those who have hung in there, with keeping it rolling, literally rejoiced when Holiday City resident Jarrett Funk walked in for the meeting.  Mayor Pam Clark welcomed him and introduced him to the rest of the council and administration as someone who is stepping up and will be their newest council member.

As part of the COVID safety measures being taken in Ohio, the Council was “spread all over the room” except for the moments when the new council member was being signed in by an online Notary with the assistance of the Village Solicitor Cara Wall. Mr. Funk, who was sworn in by Wall, prior to the signing, thanked everyone for the opportunity to serve the village.

Village Clerk, Laurie Rupp, congratulated council member Jodie Faunce who joined council a year ago and said that Tyler Rupp has been a member for about three months.  Funk is taking the seat vacated by the resignation of Pam Day and will run till December 21, 2023.

During New Business, Council member Sean Rupp addressed the rest of council concerning a need that has been obvious to them all for years, with a suggestion for a solution. As the Census shows, Holiday City only has around 50-60 residents and they have a deep desire to give people some initiative to move there. Rupp said that as an Industrial Developer, the need for Residential Development in Holiday City has been in his thoughts “a lot lately, he said, adding, “Housing is the issue…we have a desperate need for  more residents.”

He believes the cost is high for a developer because they would have to put in the infrastructure before being able to build houses  or sell the lots.  Rupp stated his opinion that due to that, the council needs to “look at a different formula.”  He recommended that the village step up in order to get some housing going in Holiday City, and put in the infrastructure as a draw to people who might want to build a home, and/or housing developers. “There is a program that you can tax abate all new houses under the CRA program like we do for businesses already.

Other villages are looking into this and I think that is where we have an opportunity…because we can do it.  I would like to see us work on a program to make maybe 20 lots available here at a very reduced price to get people to build here.”  He stated that he has a plan and hopes to attack it in the way he does with industrial building. “Lets invest in a plan to draw people here. That is the big picture.  I am sure the other companies would appreciate having some more workers to hire.”

The other council members all indicated that it sounds good to them. Rupp suggested that they can check with Maumee Valley Planning Organization and CDBG to match funds and offset the cost.  He said that their next step would be to authorize the village administrator Gary Baker to get started.  There was some discussion with the mention of single dwelling homes, apartments and condos involved, as well as the price of home building presently. Rupp pointed out that by the time they are ready, the price to build a home will have changed.  Water, sewer and electricity will need to be done first.  Following the discussion, Sean Rupp made a motion to enter into Executive Session to “consider the purchase of property for public use.”

There was no action taken afterwards.

In regular business, council voted to amend the wording, suspend the three reading rule and approve Ordinance 2020-8 Lodging Tax and Resolution R-2020-11 Authorizing a Then and Now Purchase order.  Also approved were the minutes for the October 15 meeting.

Solicitor Cara Wall said that a meeting is being scheduled between herself and the Montpelier attorney and she will report back on that. Mayor Pam Clark reported that she attended the County Mayor’s Meeting in October and that the November one was cancelled. Letter will be coming about Federal Funding cuts. Clerk Laurie Rupp reported that the Wine Fest has been cancelled and that her understanding is that “it has fizzled out and that it will not be held from here on out.”

Baker, in his Administrative report, informed council that the village is selling a lot more electricity to Menards and 20/20, “which is a good thing.”  The computer company that sets up their billing came in to discuss the mounting of the new TV for the new room.  He plans to attend a meeting in Defiance on November 24 for infrastructure grants. He is on the Small Government Committee and will be discussing the grants and other items.  The storm basin on Selwyn Drive is still in need of repair and he is still trying to get the Turnpike to do something about it.  He also stated that nothing has been done about the Cattails near the railroad. Sean Rupp said he would speak to the State crew to see if they can take care of them.

Following the Executive Session which was held, with no further business, the meeting adjourned.