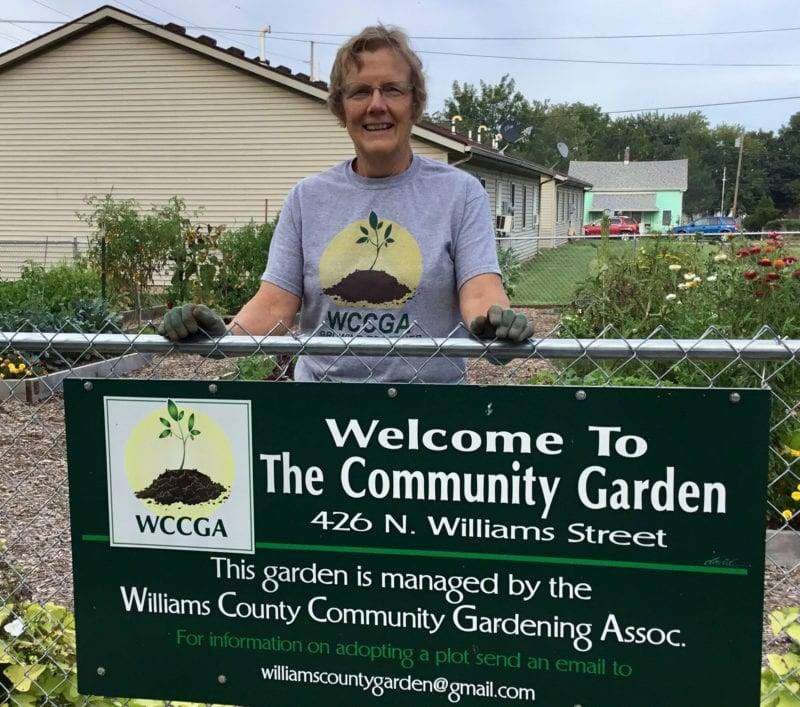 EAT FRESH … Standing near the sign at the first of the gardens up and running, is Williams County Community Gardens Association Board President Jennifer McKarns. She is a working president, for sure, putting on her gloves and digging in wherever it is needed. Her love for gardening is being passed on to all those who have a desire to have their own little raised garden. (PHOTO BY REBECCA MILLER, STAFF)

Jennifer McKarns may have only moved to Bryan, Ohio in 2012, but she has already written her name in the soil. She calls herself a transplant from the tiny town of Olmstead Falls, Ohio, via Toledo where she taught school for 27 of her 30 years of being an art teacher. Her husband, Mic McKarns, who is the Building Chairman for the Williams County Habitat for Humanity, is from the Bryan area, so when Jennifer retired from teaching, they decided to move to his home community.

They are two of those people who are probably busier after they retire than they were before. Since moving to Williams County, Jennifer enjoyed taking a Master Gardener Class with the late Florian “Flo” Chirra, and rekindled her love of gardening which had begun as a child. “My dad and my grandpa both had gardens and all I ever wanted to do was work in a garden,” she said.
“But I didn’t realize that I could have gone to school for horticulture or agriculture, so I went to college and became an art teacher.” While living in Toledo, besides being a school art teacher, Mrs. McKarns had a part time position teaching at the Toledo Museum of Art. She brings a very creative mind to the area and is choosing to unleash it in the form of Williams County Community Gardening Association.

“I had been volunteering some time at All Things Food, when it was open, which was a healthy foods market in Bryan. I often drove by a piece of property and thought it looked like it needed a garden. As a woman of Faith, I felt like maybe I was supposed to put one there. I wanted to be sure so I asked a few people what they thought. I was surprised that even though this is an agricultural region, many don’t have gardens!”

After some research, they got started in March of 2017. The research included putting out the word that she was interested in starting a Community Garden and wondered if others were also. A couple community meetings were held, with slight success, but as she visited other groups who had tried and failed, she discovered what not to do in order for this effort to be successful. “One thing that is very important, is that the gardeners have to ‘take ownership’ of their plot, or box garden. We have incorporated that into our efforts and it is going well,” McKarns shared.

“I really want to help people realize that what they eat makes a big difference in their health. Growing things and eating fresh is a great way to improve your health. So…I went to the newspaper and told them my idea. A small article was published and soon after that, the newly formed Land Bank called me. Others began to call as well and so we had a meeting of all interested parties to brainstorm. Our nine Board Members came from that meeting. We wrote down our purpose, formed some goals, and chose a name – Williams County Community Gardening Association.

To get started, the Land bank offered three properties and she chose one at 436 N. Williams St. in Bryan, because there were apartments right next door and it already had a water line. The house on the property was torn down, with none of the construction trash being thrown in the basement to cover, as she requested. “I didn’t want chemicals from the junk leaching up through the ground and they were gracious to honor my request,” she said. A major blessing that came with the land, was a $6000 Greening Grant from the Land Bank. With that money they were able to dig up the water line and replace it, adding a yard hydrant, build the twenty raised beds out of cedar and put up a wire fence.

“That all happened by November of 2017,” McKarns said. “Last summer (2018) Bryan Mayor Carrie Schlade dedicated the garden. This is our second year growing. Two of the beds are grown by a gentleman in the apartments, he is growing a salsa garden. All 20 have renters who pay $10 a season, which pays for the city water. We provide all the mulch and the compost. Those of us on the board volunteer with Matt Baker, ‘That One Farmer Guy”, on County Rd. 13 and E.”

“We help him by doing seed starts in the spring and he donates enough seed starts for the gardens. We also work with April from April’s Greenhouse, helping her with seed starting and she has donated potted flowers to stand by the gate. She also drove the backhoe when we dug up the water line.” These very symbiotic relationships have helped the gardens to get started. There is a second Community Garden getting started in Kunkle, also on donated land from the Land Bank. It is twice the size as the one in Bryan, and it will hold twenty raised beds in the back and have a Children’s Garden area in the front. McKarns says she is continued to be amazed by how things are coming together continually. When they held a community meeting at the United Brethren Church in Kunkle, Gloria Gilcher, a trustee in Kunkle, was there. She is also a member of the Pioneer Lions Club and she knows a lot of people , who are also getting involved now. Gilcher said that she would love to have the gardens catty cornered to her property so that she could be the caretaker. (That is the case in Bryan as well with one of the Board Members and it has worked well.)

Now, Edon has expressed an interest in having a community garden there and have contacted Jennifer to get her assistance in getting it started. The village of Edon has offered to give the water for free, but the group will need to put in their own hydrant. On September 19, there will be a meeting at the Edon Library, to check about interest and support in the community. “There will be no Greening Grant, so we will have to raise funds, and that slows it down,” Jennifer said. “But this is exciting and it is doable.” She has already contacted the ministerial association, school groups, scouts, Fire Chief, and lots of other good connections.

The Board’s vision for each community is that the gardeners take ownership. Bryan and Kunkle growers are doing well with taking ownership of their own beds. “We have to encourage and teach and God provides the people to do things like dig holes, run backhoes, and build the beds,” Jennifer added. They do training demonstrations such as for trellising, bug control, etc. Last year they had two classes, with the first being called Everything Kale taught by Andrea Miller, the Bryan Hospital dietitian. The class was held at New Hope Community Church and they learned how to make kale salad, kale smoothies, a kale sandwich and other recipes.

The other class was on Canning Produce, was also held at New Hope and was taught by someone from the Extension “In the future, we hope to continue helping Williams County residents be healthier, so we have confirmed that a well known author, Dr. Gregor who wrote How Not to Die is coming to Bryan to do a lecture. He will be speaking on May 30, 2020 at the Arts and Ed building. The hospital is partnering with Williams County Community Gardens Association.

For those who have felt themselves saying, “Well, I would love to do that!” there are ways to make that happen. For more information, contact the website, wccga.org, and pursue a great amount of ideas and info. There is a form online as well, that can be filled out and sent to them. Just click on Get Involved.