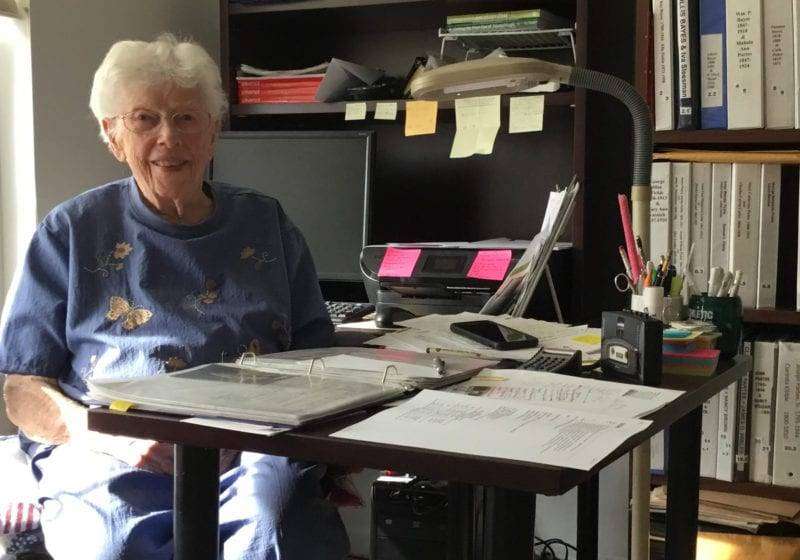 How many times have we heard someone say, “I wish I had written down all the cool things that someone told me, but now it’s too late.” As the people we know and love become older, it is important to take time to ask questions and let them tell us about their lives! Each generation will repeat mistakes if they do not learn from the generations before them. The wisdom they pass on is priceless.

On August 27, 2019, a lovely lady in Bryan, Ohio turned one hundred and one years old! Her former American Legion Post connected with an area Army Recruiter and they pulled off a great surprise for her, on the twenty sixth. Showing up in her yard, along with Bryan Mayor Carrie Schlade, some Girl Scouts, the High School Band and lots of community members and military veterans, they sang Happy Birthday and honored her for her long and full life. The mayor even proclaimed it Roena Bayes Day. Miss Bayes said she could not have been more surprised. “They kept me from going to the front door,” she said. “When I went out through the garage, my first response was to be a little scared, because I saw all the uniforms and thought, Oh my! What’s with all the military? What are they doing here?” Bayes paused to chuckle and then added, “They had already done a big deal for my 100th birthday last year and I had said I didn’t want to do that this year. Well, they certainly were creative! It was wonderful!”

Miss Bayes sat in the office of her home of 11 years, surrounded by history. Her bookshelf holds a large number of notebooks, all filled with family information and memoriabilia. She has become a historian of her family, but also, the American Legion Post 2 in Washington D.C., gathering and storing history with her fingers, her time and her love. This still independent centenarian who never married has lived a full and happy life, coming and going as she pleased, changing jobs as the desire hit her, and moving when she wanted to. “I never married so I don’t have children, but I have cousins who live around here and a nephew relatively nearby in Michigan. They are all so kind and look out for me.” During the interview she got a call from one cousin inviting her to join them for supper at Rita’s in Edgerton, while another lady walked in and said, “I’m here to fill your bird feeders.” Oh, to be so loved and cared for when we reach those elder years.

Bayes was born, and grew up, in Farmer, Ohio. Her parents, Sarah Ellen Fickle Bayes and Roy Bayes, owned a General Store and a Garage where they both put in long hours. Roena remembers those two places across the street from each other, with fondness. “They were already running them when I was born in 1918. It was sad when they tore down the general store. The garage is still there, though! It is Mavis Garage now,” she said with a soft smile on her face.

When Roena was growing up, there was a school for First through Twelfth Grades in Farmer (gone now) and she attended there, graduating in 1936. “I went to Bowling Green College for two years, after I graduated,” she remembered. “I was studying to be a teacher and got a job teaching in Milford Township, in a one room school house. I taught for one year and they closed all the country schools and consolidated into Hicksville, all the students and all the teachers. I taught there until I saw an ad that they were taking women in the army. I thought I believe I wanna go!”

When asked how her family reacted to her joining the army, she said, “Well now, that’s a story.” She continued, “My brother, my nephew and cousins galore were already going. I went home and said to Mother, “Mother, I saw this ad in the paper and I think I’d like to go. What should I do? She said, “Well, you have to make up your mind yourself.” I said what would you do if it were you? And she said “Well, I’d go!” That gave me permission. Then I said, ‘Should I tell dad or wait till I’ve done it?’ Mother paused and just said, ‘Well, you know your dad.’ I kinda felt that meant I should register before I told him. They didn’t express themselves much then, so when I told him that I had joined the army he didn’t say much. He seemed to be ok with it. Nothing he could do since I had already signed up.”

It was in the middle of the 1941-42 school year so when she told the school superintendent what she had done, his response was to ask how long before she would be leaving? Roena laughed at how vague her answer was, but told him what she knew, “The sergeant said to go home and take care of things and I would have a reasonable amount of time.” Whatever that meant they weren’t sure, so she kept teaching until she got her orders in 1943. When the orders came, she left within a couple days and fortunately there was another teacher available to step right into her spot at the school.

Her time in active military may have been only a few years but she remembers it vividly. “We went to Ft. Oglethorpe, Georgia for Basic Training,” she said. “Then went to Nacogdoches, Texas for Army Administration School. My first assignment after that was in California at Minter Air Force base. I was there for one year, then got orders to go overseas, to be part of the effort in WWII.”
“There were a lot of women in the army. We went over on the Queen Elizabeth and when we landed in Scotland, we took the train down to the army place where they sent out the replacements, in England. We got assigned from there. I got assigned to do intermediate work parceling out paperwork. We maintained the officers briefing room. There were hundreds of big maps and those of us who worked in the office would get out the maps that were needed for the officers to use during planning sessions.”

“We would put markers on them to show them where everything was happening, like little black bombs and such. The officers would go in and make their plans. We would check off their names as they went in and then lock the door. We never heard what was going on in there, but when they were finished, we would roll up the maps, stamp them secret and the courier would take them to whoever was supposed to have them for the battles ahead.” From there she went to Germany and France. President Eisenhower’s orders were for them all to go straight back to the Pacific coast in the U.S. but “after the bomb dropped…..well, then we all got to go home instead.” Following WWII, Miss Bayes was in the reserves and was recalled for Korea. “I didn’t go though because the doctor said he thought he heard something with my heart.” She was honorably discharged at that time.

During those years after WWII, Roena was asked to come back to teach. She didn’t really want to, but, “Mr. Kammayer was the principal at Farmer and came to our house the week I got home and visited with mother and I. My dad had died while I was overseas. We talked and visited and finally before he left, he asked me to come back and teach school for him. I said no, I didn’t want to and he said, ‘Do you have a job??” When I said no, he talked me into teaching until I could find what I wanted to do.” Often after comments like this, Miss Bayes smiles softly and it was like she had returned to the past. Her memory is so clear. They had 50 students in two classes with one teacher so they split the class and she got the third grade. She ended up teaching for about 2 or 3 years. Then she saw the superintendent at Hicksville, and he offered her a better paying job and she took it, again teaching in Elementary School.

That didn’t last long for this girl who felt free to be brave and step into new things. One day while talking to some friends, she heard from one how she had just gone to Cleveland for Medical Technology training, “and I thought it sounded interesting. So I went to Cleveland to Med Tech and got a job at Van Wert with Dr. Good. (While I was there was when I got recalled to Korea.)”
After working as a Med Tech for a while, one day she thought she would “go to Washington D.C. and see Buzz, a friend from the army when I was in Europe.” Buzz had been living and working in D.C. since she was 17 years old and really “knew the ropes”, so when she asked Roena if she might want to move there, Roena said sure. That week, her friend set up three job interviews for her and sure enough, she took a job with Suburban Hospital. But as usual in her life of adventure and change, soon a friend and her husband who were both working at Suburban Hospital as well, got jobs at Bethesda and she followed suit. She ended up working in the National Institutes of Health and loved it.

During those years, she got very involved with American Legion Post 2, eventually being their Commander. She had already been active with American Legion Post 137 in Farmer, and so she transferred to Post 2 in Washington D.C. “Dornetta, who was just here for my birthday, is the new commander of the same post,” she said. “It was wonderful to meet her…so exciting to be with another Commander of my post.”

Following years of working in Washington D.C., one day her brother Al and his wife were visiting her. She had been considering retirement and thought she might build a little house in Pennsylvania, just across the line from D.C. She asked her brother if he would ever come up there to live. When he agreed, the three of them ended up building a small house together. She shared that it worked out really well, especially (she said with a laugh) as her sister in law did all the cooking.  Eleven years ago, she decided that since they were both gone, she would move back to her childhood area. Her nephew’s wife took her around to see different homes for sale and she found the one where she is happily living now. “We walked in here and I said, ‘I want this one! I’ll buy it!’ I just knew this was the one,” she said cheerfully. Life is still full, and very good, for this active, clear thinking, friendly lady who acts and thinks like she is still much younger. “I go out to spend time with our family on one of their farms on Sundays and my cousins all do things with me. Life is good,” she said with a soft sigh.