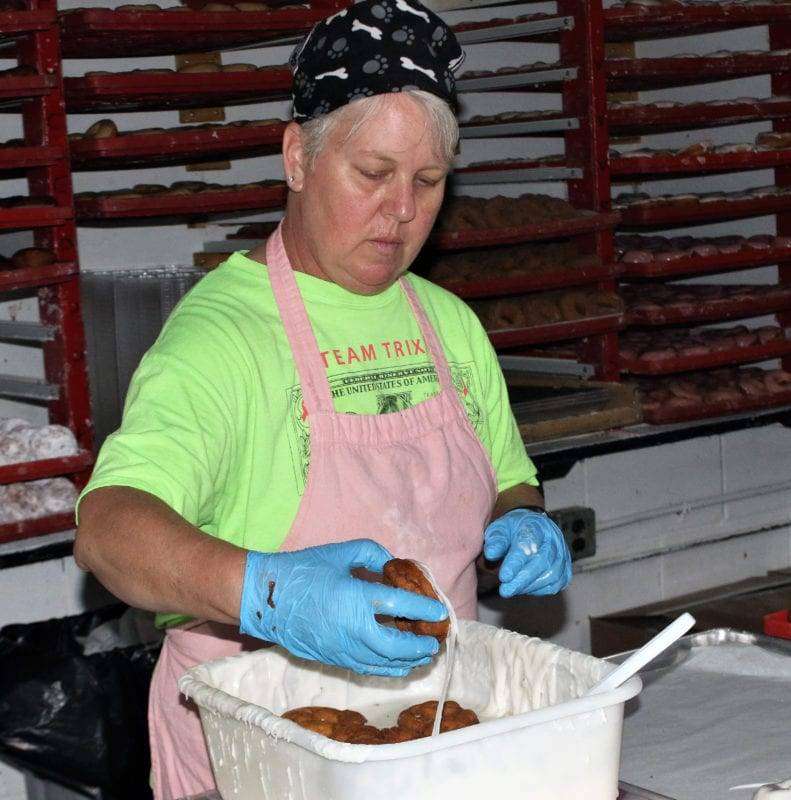 We Americans love our donuts. So much in fact, we consume approximately ten billion annually or more than two and a half dozen per year for every person living in this country. That’s a lot of donuts or doughnuts, no matter how you spell it. Nowhere is our love for these tasty treats more evident than during the seven-day stretch of the Fulton County Fair where the longest line of people standing and waiting, is not for any ride or show or exhibition, it’s for donuts.

They are made fresh and sold almost immediately under the fairgrounds’ main grandstand by the Wauseon Music Boosters to raise money for the school’s marching band and choir. This incredibly delicious fundraiser began in the early 1960’s when a young mother, named Pauline Frazier, who was also president of the “Wauseon High School Band Mothers”, was looking for another way to raise money for the band other than the traditional selling of candy bars door to door.

The new venture proved to be very successful, raising approximately $800 for the week with a $0.60 per dozen price tag. Today the money raised has increased significantly and is used to cover the costs of band uniforms, choir uniforms and trips to Disney World which is taken every two years.

However, it takes a monumental effort by the Boosters, band and choir members and countless other volunteers to make it all happen in the short seven days they have to produce and sell. “Once the fryers are up and running, we make and sell about 500 dozen per day, if not more,” estimated Booster Shelly Potridge. “It’s not enough,” she added. “We could sell every donut we make.” The Boosters have a sales level that would make any Dunkin’ Donuts location in the country very envious.

The makeshift bakery operates 24 hours a day while the fair is going on and the donut makers work on three different shifts. “The kids are contributing to their own cause through their labor. That’s how they are getting everything they get,” explained Ms. Potridge. “They’re not out having to sell candy bars or anything else. This is our one major fund raiser.” Customers will often wait for more than an hour in line to satisfy their craving for these once-a-year pastry delicacies which come in chocolate, vanilla, maple, strawberry, powdered, cinnamon and plain flavors. And they will tell you they are more than happy to do it.