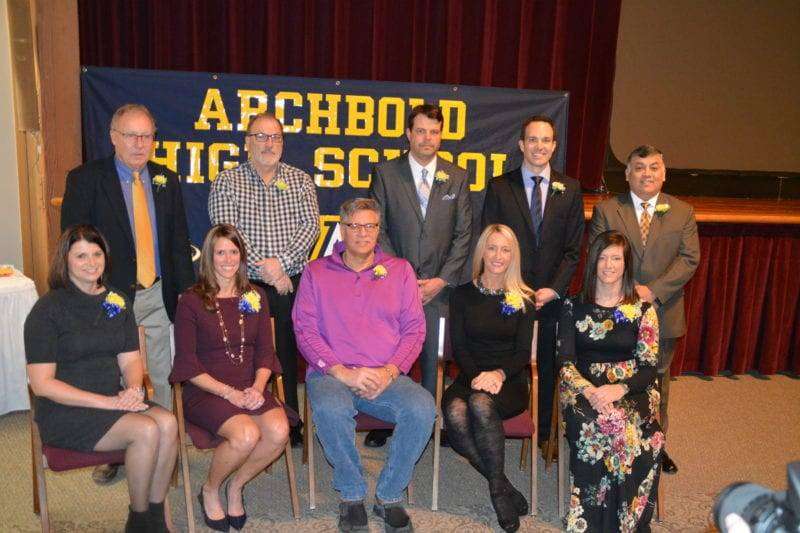 Emotions were on display as the new inductees to the Archbold High School Athletic Hall of Fame expressed gratitude for being selected. The Hall of Fame Class of 2018 as selected by the Hall of Fame Committee, were honored at a banquet sponsored by the Archbold Rotary Club Saturday, Jan. 20 at Founders Hall in Archbold. More than 200 people were in attendance.

The recipients shared humorous memories of games, practices and relationships as well as heart-tugging thanks and appreciation to coaches and parents and siblings for helping them succeed. The audience listened with rapt attention. Each inductee was announced through a slideshow of photos from their time at Archbold High School and college. Each person received a special award. The ceremony brings the Hall of Fame to 62 members.

This year’s honorees include:
John Downey (football coach 1979-2008)- won 222 games, had five unbeaten regular seasons, nine playoff appearances, and won the 1988 State Championship. Downey was twice named Ohio Coach of the Year. He said he was the “luckiest man in the world,” paraphrasing Lou Gehrig, in being able to work at Archbold and coach for as long as he did. Downey now serves on the Archbold Board of Education.

Ed Grime (Class of 1972)-Ed was an outstanding left-handed pitcher. Grime had the amazing feat of throwing three no-hitters in a six-day span. Grime spent two years in the Philadelphia Phillies organization. He lives in Archbold and is a supervisor for Yanfeng Automotive Interiors.

Curt Spotts (Class of 1977)- won 10 letters in three sports. Spotts earned first team NWOAL honors in football, basketball, and baseball. Curt was named to the All-Ohio team in 1977. Standing at 6 feet, 6 inches, it was obvious how he was a presence on the basketball court or football field.  He resides in the Phoenix, Arizona, area with wife. They have three children.

Roel Galvan (Class of 1983)- was a star running back on the 1982 State Runner-Up football team. He won 11 letters in three sports and also won 109 wrestling matches and reached the state meet.
Galvan expressed his thanks for all the time his parents spent getting him to practices and watching him at his various events. He credited sports for getting him into college. He was a three-year letter winner at the University of Findlay. “There are so many positive memories,” Galvan said. Today, he is the Director of Employee Relations and Training. He is a member of the Archbold Board of Education and has been a wrestling official for 25 years. He and his wife, Dana, have four children.

Chad Martz (Class of 1990)- was the 152-pound state wrestling champion in 1990. He was a defensive end on the 1988 State Championship team and earned 2nd team All-Ohio honors that year also. He has followed his passion for horse racing into a career buying and selling horses at his farm in Hudson, Mich.

Susan Pape White (Class of 1994)- was named 1st Team All-Ohio as a pitcher twice and had 10 career no-hitters and a 0.67 ERA. She was also voted 3rd Team All-Ohio in volleyball. White said she won the lottery at the age of 4 when her family moved to Archbold. Her coaches taught her about have the drive, dedication and determination to succeed.  “I wouldn’t be here if it wasn’t for my teammates,” White said. She is a fifth-grade teacher in Mount Vernon, Ohio. She and her husband Josh have two sons.

Meredith Neff Luther (Class of 1997)- Meredith earned 11 letters in three sports, with her volleyball teams owning a record of 93-10. She was also named 1st Team All-Ohio in volleyball. She has gone on to run eight marathons and now resides in Melbourne, Florida, with her husband Anthony and their two children.

Kacy Stevens Myers (Class of 1999)- was twice voted 1st Team All-Ohio in volleyball as her team went 108-6 during her career including a state championship in 1988. She went on to play at the University of Toledo where she was a four-time letter winner. Her talk was peppered with tears as she talked about how her parents never missed an event of hers, right on through college. She said she was thankful for her teammates, friends and teachers. “I found my passion in volleyball,” Myers said. She earned a bachelor and master’s degrees from Toledo and began a career in recreation. Today she is the associate executive director of Fort Meigs YMCA. She and her husband Ron have three children.

Jill Evans Holdgreve (Class of 2002)- was chosen to the 1st Team All-Ohio in volleyball and was 3rd Team All-Ohio in basketball. She continued her volleyball career at Defiance College. Evans-Holgreve attributed her success to the longstanding coaches at the school. She is a trainer for Fusion Health and Fitness and also the Archbold Volleyball Coach. She lives in Archbold with her husband Ryan. They have two children.

Donnie Young (Class of 2002)-Donnie won 15 letters in four sports and placed twice at the state wrestling meet along with a fourth place in the 400 meter run at the state meet. He started off with some good-natured teasing of Downey, but closed in tears talking about his relationship with the coach and his parents. “Archbold’s people truly care,” Young said.  Following graduation from Eastern Michigan University, Young has pursued a career in coaching women’s sprint at Bowling Green and now Vanderbilt. He is a newlywed with his wife Ann and lives in Nashville, Tenn.

Be the first to comment on "January 24th, 2018: Archbold Adds Ten To Athletic Hall Of Fame"