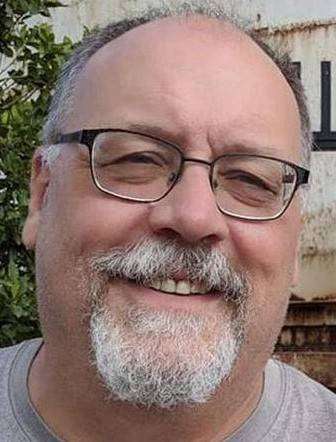 Jeff was born in Bryan, Ohio, on Sept. 28, 1961, to Phillip and Cynthia (Taylor) Rigelman. In August 1978, when he was 17, the family moved to Lynnwood, Washington. He attended Mariner High School his senior year, but transferred his credits back to Bryan High School so he could graduate with his friends in 1979.

Jeff and Louise (Thronson-Schingeck) were married Dec. 1, 1990, in Burlington, where they raised their family.

For the past 41 years, Jeff worked as a restaurant manager. During that time he met his wife (the love of his life — his soulmate as he always told everyone), at the Burger King in Mount Vernon, Washington, where they both worked.

For the last 14 years, he worked for Olive Garden, where he worked in restaurants at multiple locations ranging from Lynnwood, Washington, to Anchorage, Alaska, and he made an impact on every employee he worked with. He most recently became the general manager for the Burlington Olive Garden.

As an avid sports fan, his favorite team was the Ohio State Buckeyes, which he would proudly wear attire everywhere just to strike up conversations with people. If he could, he’d talk sports 24/7 with whoever would listen. His other favorite teams were the Detroit Lions (never cared that they struggled every year, and in fact he kept professing that one day they will win), Detroit Tigers, Detroit Red Wings, Detroit Pistons, Seattle Seahawks, Seattle Mariners, Gonzaga University, University of Portland, University of Washington and Burlington Edison High School Tigers.

When he was younger, he played baseball and bowled, and as he grew older he played recreational softball. He also loved coaching, as well as watching his kids and grandkids play sports. Jeff was a volunteer coach for soccer, Little League baseball and Triple Threat Select Fast Pitch softball, as well as the Burlington Edison Little League treasurer for the past 15-plus years. He loved road trips with the family and collecting shot glasses from every new place visited; so many fun memories and adventures.

He also collected baseball cards and old coins. Jeff loved barbecuing on his charcoal grill (tasted better than gas grills), making his mom’s spaghetti and meatballs for the family, roast and noodles, homemade ice cream and his “whiskey” fires. He just loved his family and spending time with them and close friends whenever he could.

A celebration of life will be determined at a later date when large gatherings are permitted. The family would like to thank everyone for their support during this unimaginable time.

Arrangements are under the care of Hawthorne Funeral Home, Mount Vernon, Washington.