Kayak Race Leads To A Fun Day In Pioneer 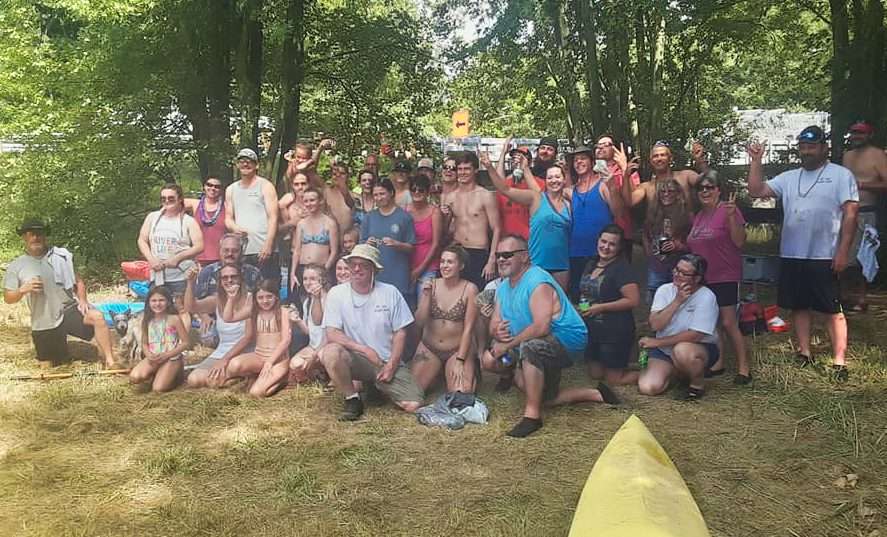 KAYAK GROUP … Friends of the St. Joe stand after the race on the St. Joseph River in Pioneer.

The Friends of the St. Joe group held a kayak race on August 28th on the St. Joseph River. The group itself travels to different rivers with the goal of having fun and cleaning up any garbage that they come across.

This kayak race was no exception with time being taken off for each piece of garbage everyone brought back. The group started around 5 years ago with a few friends and has grown to over 1000 members now.

There were also fun checkpoints and points of interest set up along the river for each of the contestants to compete at. “Some of the checkpoints were stopping and dancing the hula, throwing balls at a picture of my face, stopping and drinking a whole drink set aside for each person and other stuff as well.

Time would be taken off your end time for each completed checkpoint, but 10 minutes would be added it you didn’t complete it.

Other things were points of interest that I thought were cool such as an Eagles nest or a beaver hole,” said Joe Nickloy who is the organizer for the group and event.

The kids were given a head start on the river and the adults were encouraged to cheat. “We told the adults to make things more interesting and tip others over, or sabotage other people’s checkpoints to make it harder for them and worsen their time. It made the day much more fun. It was a whole lot of laughing and fun,” said Joe.

Everyone was competing for the grand prize of $360, a new kayak, paddle and a dry box. A $10 entry fee was collected from everyone who participated in order to pay for the prize.

After the race, there was a band and a cookout dinner that was included in the $10 entry fee. The ultimate goal though, besides having fun, was to clean up the river and leave it better than it was found.

“We go from river to river, clean up trash which is the important thing for me. It never ends though. I remember going and cleaning up a section of river and a week later someone had emptied a whole bag of trash at that exact spot. Its why we are out here doing this,” said Joe.

If you are interested in joining the group, you can join on Facebook at Friends of the St. Joe page and find information on more activities.