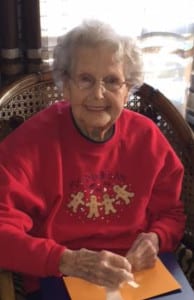 Mary Bulger Holland, 98, of Spring, Texas, died on June 11th 2015 at the home of her daughter Ann Beasley and grandson, Charles Beasley. She was born on December 14, 1916 to the late James (Jimmie) and Mary Laura Bird Bulger, both deceased.

Those who preceded her in death were her husband Alfred, her parents; James and Mary Laura Bird Bulger, two brothers; Don and John Bulger and two sisters, Pauline Bulger Dowd and Rosetta Bulger Burns.

Mary graduated from high school in Cherryvale, Kansas in 1933 and Coffeyville Junior College in 1937. During her working years she served as a substitute teacher, a Sears employee and later for 30 years as a social caseworker in the Kansas State Office for Social Welfare.

Mary, Al, and family were members of the Holy Name Catholic Church in Coffeyville for almost 36 years before moving to Melbourne Beach, Florida. They resided at 514 West Fifth Street where they raised their children through their college years and then they began retirement in 1977.

Prior to her Husband’s illness and death, Mary and Al were fortunate to travel the world and visit all 50 states in their Airstream Trailer. They truly enjoyed their wonderful retirement years.

Arrangements are pending and will be conducted at a later date in the Calvary Cemetery in Coffeyville. In lieu of flowers the family requests any donations in Mary’s memory be sent to Holy Name Catholic Church, 408 Willow, Coffeyville, Kansas 67337. Local arrangements have been entrusted to the Grisier Funeral Home in Archbold.

Online condolences may be offered to the family at: www.grisierfh.com.