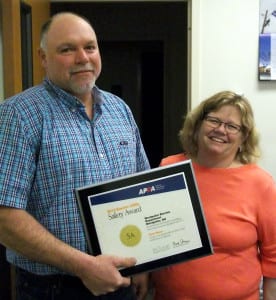 Mayor Steve Yagelski issued several proclamations at the Monday, April 22, 2013, meeting of the Montpelier Village Council, including one that was a surprise to the village clerk. He also issued a safety award to the village and village employees. Council approved all of the proclamations and the award.

After a moment of silence and the Pledge of Allegiance, Village Clerk Rebecca Semer was pleasantly surprised to hear a proclamation declaring May 5 – 11, 2013, as Municipal Clerks Week. The proclamation “extend(s) appreciation to our Municipal Clerk, Rebecca J. Semer and all the Municipal Clerks for the vital service they perform and their extraordinary dedication to the communities they represent.

Following that recognition, Yagelski then proclaimed May 2, 2013, as a National Day of Prayer in Montpelier, Ohio. The first National Day of Prayer was instituted in 1775, as a way to unite the nation in prayer. Declared the mayor, “it doesn’t matter if your place of worship is a church, synagogue, temple, mosque, home, or other hallowed place, I hope you will take a moment today to pray to God. In these prayers, remember our loved ones, our community, our military and their families, people and families, especially our hard working friends and neighbors that their needs be met during challenging times.” He also told the council that that he received a letter from Sue Burns that the National Day of Prayer Task Force and the Montpelier Ministerial Association are providing a Community Prayer Breakfast with all the city and county officials invited. The observance for Montpelier will be held on May 2 at 8:30 a.m. at the First Presbyterian Church located at 114 West Washington Street, beginning with a continental breakfast followed by a message from the Riehle family of Edgerton.

The first Arbor Day was held in 1872, as a day to set aside to plant trees, and the practice continues to this day. Mayor Yagelski proclaimed April 26, 2013, as Arbor Day in the Village of Montpelier, and urged all citizens to celebrate Arbor Day and to support efforts to protect our trees and woodlands.

Village employee Kevin Mercer was called to the front to receive the American
Public Power Association’s (APPA) Safety Award of Excellence for safe operating practices in 2012, earning first place in the category for utilities with 13,570 worker hours of annual exposure. Village officials noted that under Mercer’s leadership, electrical employees all work safety equipment including fire resistant shirts, pants, and gloves, noting that in our summers’ hot temperatures, this could be uncomfortable, yet they have continued to work safely.

Council then got back to the usual business of approving the agenda, with minor changes, the minutes of the April 8, 2013, meeting, and the financial reports for March 2013.

Supervisor of Administrative Services Kurt Roan gave his report on road work within the community. He said that the Brown Road project was moving along. They are currently doing drainage work, but there have been some delays due to heavy rains. Phase 3 of the sewer separation project is also continuing with basecoats having been laid, and patching. Asphalt will soon be laid. Work still needs to be done to restore yards that have been damaged during the process. The project is on schedule.

Roan is in the process of opening bids on May 8 for the Charlie’s Way road project, which will be reconstructed between Wabash and Steuben Streets, and the re-surfacing of the 100-300 blocks of East Washington Street. Looking ahead toward Phase 4, the village is discussing funding resources. The village hopes to have this phase going by the middle of next year.

Council received a letter from Fire Chief Dale Fritsch concerning old fire helmets. It is in their budget to replace older helmets with new NFPA Standard approved helmets, which are a requirement. Some of the firemen have asked to keep their old helmets for sentimental reasons. They will sign a release form saying that they will not use them, but will keep them for display only. Council approved this request.

Resolution 1044 was heard and passed in its second reading. Council voted to suspend the rules to that the village could act on the resolution right away, which authorizes the Village Manager to dispose of specific police department items. There are already parties interested in purchasing some of the village’s used equipment.

Following an executive session to discuss the acquisition of property and reserving the right to discuss other matters, the council took no action, and the meeting was adjourned.

Council meetings are held at the Montpelier Police Department on the second and fourth Mondays in each month at 7:30, unless otherwise indicated or scheduled. They are open to the public, except for executive sessions.

Be the first to comment on "Mayor Issues Proclamations, And A Safety Award"