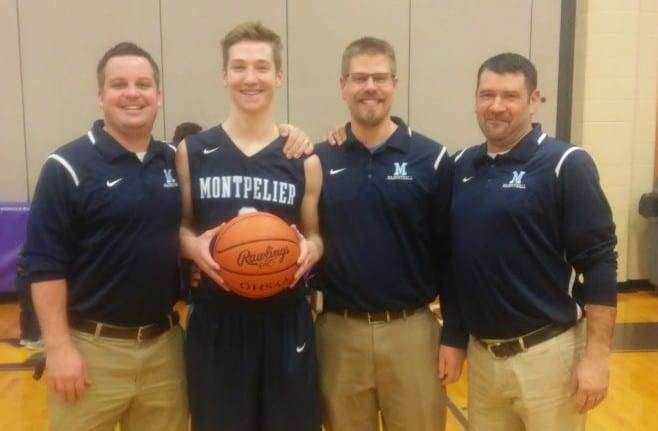 On Friday, February 10, 2017, Montpelier Senior Michael Blake became the 7th Locomotive to score their 1000th point. Though quite an achievement in itself, Blake isn’t the first member of his family to reach the milestone. His sister, Hannah, a 2016 Montpelier graduate, is the school’s all-time leading scorer with 1,525 points.

When asked to put the accomplishment into perspective, Blake shared, “Scoring 1000 points means a lot to me in the sense of remembrance. When people look back at who’s been the best basketball players in Montpelier history they’ll look at the 1000 point scorers and see Mike Bumb, Shanna Pressler, Hannah Blake – my sister, me, and my teammate Kolden Uribes. Those are great basketball players and it’s an honor to be mixed in with a group like that.”

Joining the 1000th point club is something that Blake has had on his mind for quite some time. However, he still has more to accomplish before his final game. “For myself personally, I was definitely striving for the 1000 point mark. It’s been a goal of mine since I was playing on JV as a freshman. As for the team we take one game at a time but I can tell you for certain everyone is looking at the game against Van Buren in the Sectional final last season. Our entire team has a sour taste in our mouths after last year and the ultimate goal is a Sectional title and then to keep moving forward into districts. To achieve that goal we have to first defeat Tinora. Next would be a rematch with Van Buren.”

The question of what has contributed to his success both athletically and academically, drew a quick response from Blake. “My parents deserve a lot of credit in my successes athletically and academically. Throughout the years they’ve instilled in me the competitive nature to always want more and the drive to earn nothing less than the best. Many other character traits that I’ve carried with me that have helped me throughout my careers. My sister also plays a huge role, she has been a role model to me in everything I do and pushes me to do better whether she knows it or not. It’s awesome to have a sister like her. Ever since I was a kid I’ve looked up to her in almost every way imaginable. She was a 4.0 Valedictorian with a full ride scholarship athletically, you can’t get a better sister and role model than that. She set an amazing standard for me to go and try to reach. In the end I give all the glory to God because without him I wouldn’t be able to do any of the things I am. I’m truly blessed with talents given to me from the man up above.

Blake used the word “competitive” to describe himself. When asked what motivates him, Michael shared, “Something that motivates me is the thought of success. The thought of our team cutting down the nets after winning a Sectional title, the thought of me graduating as a salutatorian. Looking forward and thinking about things that could be and then motivating myself to go and do all steps necessary to make it happen.” 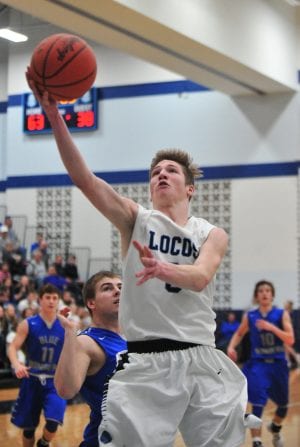 Head Coach Taylor Muehlfeld credited Blake’s work ethic for his success and elaborated, “Michael puts a lot of time into improving his skills on the floor and he also puts a lot of time into his academics. He knows his priorities and works very hard to be successful at them. He is focused and a leader by example. Michael is encouraging to his teammates and has a burning desire to be the best every second of the game and to make his team successful. Off the floor, Michael is very approachable, well mannered, and friendly. He is always going out of his way to talk to others, adults and peers. He also works hard to be successful as a student. He is involved in many extra-curricular activities that make him a well-rounded individual.”

Montpelier Athletic Director, Joe Brigle, shared his thoughts on the contributing factors for Blake’s success. “Michael has had a great support staff from his family, friends and coaches. He wants to be the best in anything he does. He has the internal fire in his belly that all the great ones have. He is willing to do what it takes to successful. He embraces success and not afraid to fail which makes an even better person.”

Blake has received recognition at both the league and District levels in basketball, but his athletic prowess goes well beyond the court. He has encountered a plethora of success in three other sports as well. In fact, this fall he was a member of both the TAAC Champion Football team, and the BBC Champion Cross Country squad. Often Blake would go from a Friday night football game and turn around and run a cross country meet early Saturday morning. Quite an achievement in itself. Individually he excelled in both being named 1st team All-League in cross country and football his senior year. In his only football season he was named 1st team All-District, and Honorable Mention All-State as a defensive back. In track Blake will be a four-year letter winner.

Blake’s success is not just limited to his athletic endeavors. On the contrary, he has more than excelled academically. Michael will graduate as the Salutatorian for his class with an impressive GPA of 3.965. A member of the National Honor Society, he is also taking Advanced Placement courses at Montpelier as well as being recognized as a Scholar Athlete in the both the TAAC and BBC. Blake also is a member of the Robotics Club, Quiz Bowl Team, Student Council and is a Class Officer.

After graduation Michael will be attending The Ohio State University.

Although his formal athletic career will come to a close this spring, Michael still plans to keep his competitive fire burning. “I have no plans to play college athletics, however I’ll definitely still play intramural sports!”

When asked to summarize what Blake has meant to the basketball program, Muehlfeld explained. “I am personally proud of Michael and his accomplishments throughout his four years playing for our program. His feat of 1000 points is incredible, but he is also our top defender and takes a lot of pride in that as well. He is an incredible teammate and it has been an honor to get to coach Michael. He is a player that has laid a great foundation for our program throughout the last four years and is one that we will continually refer back to and be appreciative of his respect and dedication to our program.”

Brigle added the following in regards to Blake’s legacy at Montpelier. “Michael is a great kid from a great family. He is a leader within our district. He has put in countless hours of work over the last 8 years and is now reaping the benefits. We are very proud of Michael for all that he has done athletically for our programs. We wish him the best in his future.”

Michael was asked to share how he wanted to be remembered by his teammates as well as the younger students. “I try to set an example for both my teammates and classmates that they can follow. As a senior leader there’s a lot of people looking up to me and watching what I do.

If I constantly goof off and slack with a bad attitude that won’t get anything accomplished and people would just lose respect for me. I try to go 100% in everything I do all the time. That’s the example I try to set and that’s the example I want people to follow. I would like them to remember the competitive nature of not only myself but the entire team. Our team hates to lose and I think that’s huge growing up playing sports. If you start out losing games chances are when you grow up losing won’t be a big deal to you. But, I want kids to remember the competitive nature and remember that it’s not okay to lose. Montpelier can’t fall back into its losing ways and if kids hate to lose it won’t.”

Despite all the accolades Blake has achieved, he has still remained incredibly humble. He is also grateful to all who have contributed to his success. “I would like to thank my coaches who have guided me throughout my high school basketball career my teammates past and present who’ve pushed me and been by my side, and the entire community of Montpelier for coming out to Fayette and showing all the love and support. I would lastly like to thank my family, and most importantly God for all of the talents and blessings he’s given to me.”

This attitude of hard work, humility, and unselfishness is apparent whether watching Blake on the court, track, or in the school hallways. It is also one that draws people to him. All qualities that will take Michael far in the days and years ahead. Obviously, that future will be very bright!