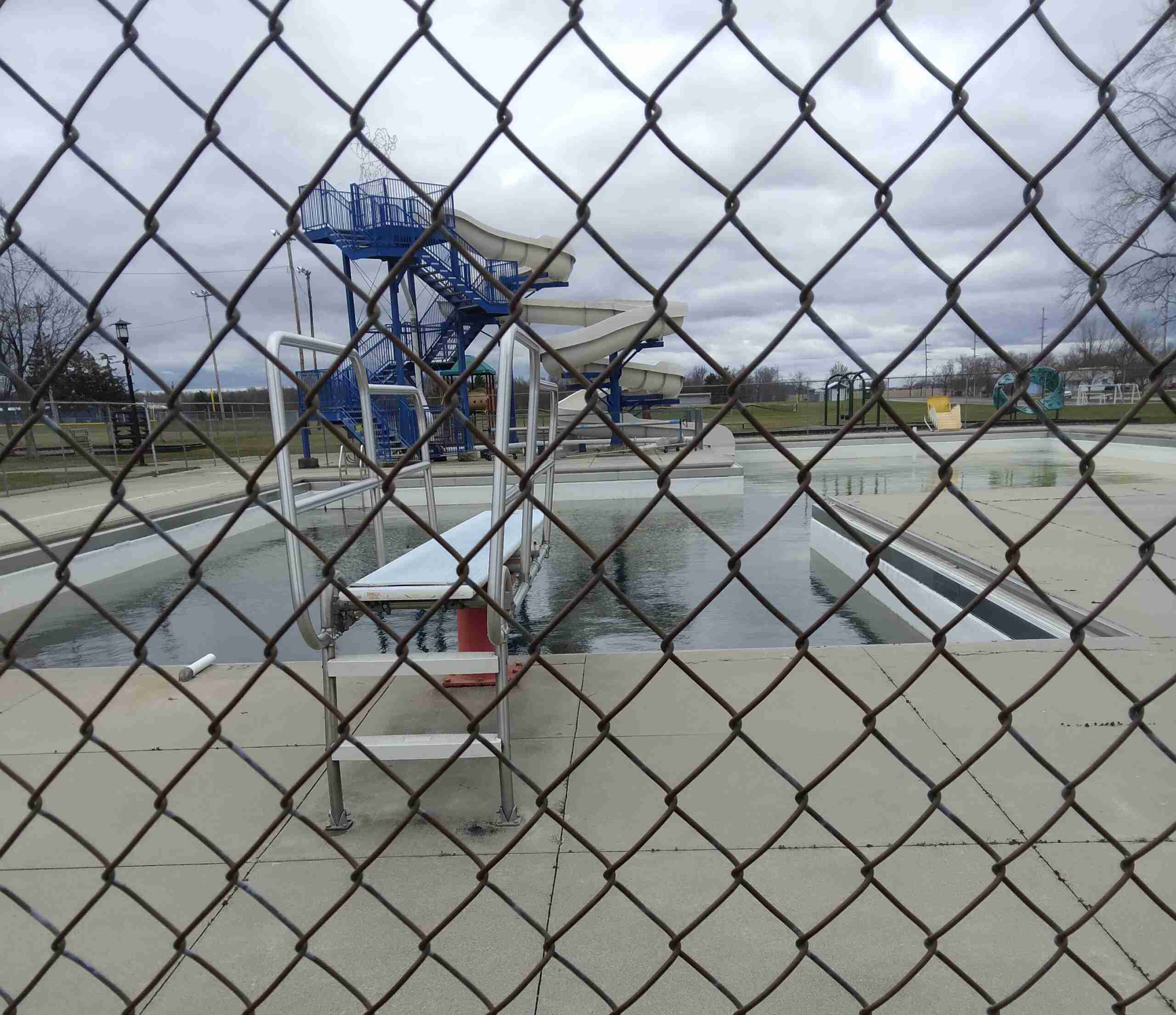 PREPARATIONS UNDERWAY … Though the Montpelier Pool is now closed, prepping to get the pool ready for the summer season has begun. The pool should be open in just over a month. (PHOTO BY DANIEL COOLEY, STAFF)

First, Nancy Nozik of Brandstetter Carroll talked to the board about what her company could offer in a preliminary pool study.

Insurance has been turned in and there are 10 teams, with 12-13 players on each team and each team will get in between 15 and 20 games.

The rules will be the same as last season and concussion training and SCA forms are on file with the coaches.

Schedules have been turned in and as far as equipment, new gear bags and 27 dozen baseballs have been purchased.

The uniforms will have Montpelier Baseball on the front and sponsors will be listed on the sleeves. The uniforms are provided by Bill’s Locker Room III.

In looking at fundraisers, there will be a reverse raffle with softball and pony leagues and Montpelier Baseball is partnering with Pony League on Tigers Ticket Raffle.

Jamie Bexten donates a portion of his profits to the league for pictures and there are $500 individual sponsor fees.

In preparation, the minor league field dugouts need some work and there is a leak in the major league press box that will need to be repaired.

There is a new five member commissioner board, with Joe Brigle, Alysha Sloan, Lindsey Willis, Brandon Shoup and Brian Cooley. Willis is the new treasurer.

Next, the board approved the minutes from the March 2 meeting. The board then approved of the financial statement for March.

That was followed by the board approving of the release funds for league umpire fees, $2,500 for baseball and softball and $500 for pony league.

Next, Park Supervisor Nick Ramos gave a report on Storrer and Founders Park and on the pool. For the pool, Quality Coatings has begun working on the locker rooms.

The gutters and grates on the pool have been measured and National Grating and Southwell Industries are now creating the grates.

Complete Pool Services said that they are able to get replacement parts for Montpelier’s current filter. Ramos is now waiting for a quote. Chlorine, sensors and test equipment have been ordered for the pool for the summer season.

Ramos made contact to get help with the changing out of rubber lines that carry chlorine to the pool.

In the parks, batting cage nets and temporary fence for pony league have been put up and also installed tile to the minor league fence.

Ramos made contact with Rich Stoy and Kevin Mercer regarding running tile and electrical on the edge of Founders Park. Once construction is done on the stage, topsoil will be used to cover and level the area.

Preparation of the ball diamonds for the season has been made and at Storrer Park, fertilizer and seed for terraced area and surroundings, as well taking measurements for erosion mats, took place.

Stoy will begin pouring for the court as soon as the weather cooperates and Ramos is waiting to hear from councilman Kannel about which basketball post system they want to use.

Recreation director Sandy Gordon then gave the recreation update. She updated Facebook and the webpage and worked on the program guide and community calendar.

Gordon is learning a new graphics program to create the program guide. In addition, Gordon is finishing putting together supplies for the summer activities.

Gordon picked up summer tie dye shirts for kids for the summer and worked on putting together prices for the concession stands and began ordering supplies. Gordon then interviewed concession stand applicants and sent off employee paperwork to the proper places.

Gordon then sent insurance numbers to Beck Insurance for accident insurance coverage for the baseball and softball teams.

Gordon started more seeds, maintained seedlings and started transplanting. She got the last of the garden order in and started working on the landscaping project at Town Hall and ordered more plants for the project.

In other business, Gordon told the Park Board that they will need to put together a proposal for the design costs on a preliminary pool study.

The board will need to check out either Peterman or Branstetter Carroll, to choose which one to do the preliminary study. They will hash out ideas for the proposal at the next meeting.