MONTPELIER SCHOOL BOARD: Nate Rose Selected As School Board President 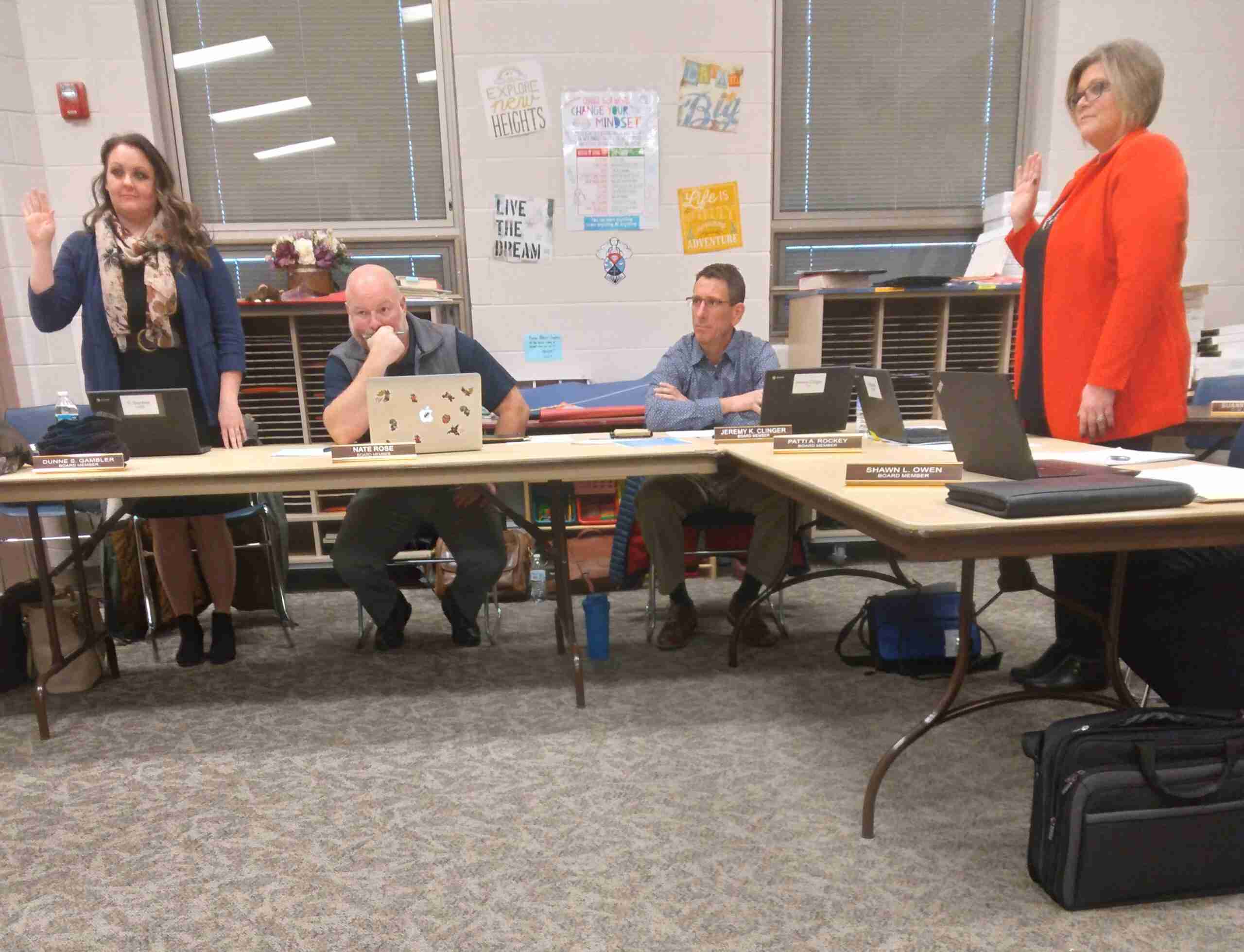 STARTING 2022 … Dunne Gambler, left, standing and Patti Rockey, right, standing, were sworn in as new Montpelier School Board members, while Nate Rose, seated, at left, was voted in as school board president. (PHOTO BY DANIEL COOLEY, STAFF)

The Montpelier School Board meeting of January 11, 2022 started off with an organizational meeting. That meeting began with a swearing in of newly elected board members Dunne Gamber and Patti Rockey.

All board members, Gambler, Nate Rose, Jeremy Clinger, Rockey and Shawn Owen, were in attendance.

Next, the board passed the meeting dates for the 2022 school board meetings. The meeting dates will be the second Tuesday of each month at 5:30 p.m., with the following exceptions, April 19, May 17 and June 28.

Next up, a motion was made and seconded regarding establishing the Board of Education’s District Record Commission to be made up of the superintendent, Jamison Grime, treasurer, Carla Rice and board president, Rose. The motion passed.

The school board then passed five measures regarding Treasurer Rice. Those measures were, according to the agenda sheet, to issue warrants in payment of all salaries and bills upon receipt of invoices, to obtain advances from the county auditor, to invest funds at her discretion (within board policy), to advertise for vacant positions…’and ‘to serve as designee to attend public record access training required for Board members of each term of office…”

The school board then passed six recommended authorizations for the superintendent. According to the agenda sheet, these were “to serve as purchasing agent, to determine the attendance of employees at professional meetings and authorize the treasurer to pay expenses…to employ personnel with regular employment…to serve as designee to attend public record access training required for Board members…per Revised Code 109.43. to accept resignations which have been submitted by employees during times when this Board is not in session…and to authorize the superintendent, during periods when this board is not in session, to make offers of employment directly to candidates for either teaching or nonteaching positions on behalf of this Board…”
That was followed by approval of three legal counsels for the district, in Ennis Roberts Fischer Co., LPA; Dinsmore and Shohl LLP and Bricker and Eckler LLP.

The Board then approved a Board Service Fund of $6,000 for the Board of Education.

Finally, the school board then passed the committee appointments made by the board president. The appointments are as follows: Gambler, student achievement liaison; Rockey, legislative liaison and Owen and Clinger, financial.

In the legislative report, the following bills were passed and could affect schools: Senate Bill 229, House Bill 169, Senate Bill 166, House Bill 29 and House Bill 122. All those bills will be closely monitored by Rockey and others.

A new Spirit Rock was put in, in honor of the 2020 graduating class and students got to attend the movie Spiderman in Bryan.

Lance Thorp was up next, with the elementary school report. To start with, Health Partners of Western Ohio gave free service, worth $19,297, to 76 students.

The upcoming Parent-Teacher Conference can be conducted either through phone, zoom or in-person. The second quarter ended on Friday and there will be no school on Martin Luther King Day. In addition, on February 7, there will be gifted testing for the second graders.

In an area of public participation, a word of encouragement was read to the school board. In essence, in the higher calling of education, the note said they appreciated the support staff, the teachers, the staff and the school board.

In the treasurer’s report, there is a new Foundations Formula and it will fund students wherever they are located. Rice stated that figuring out this new formula is complicated and confusing. She will be attending a seminar in the near future, in hopes to understand this new formula. Also, there will be a new computer system that will take effect on March 20.

In financial reports, it was recommended that the Board approve the reports from December 2021. Also, it was recommended that the Board accept the following donations: $1,633.35 to the nurse’s fund, from First United Methodist Church; $5,105 to wrestling, girls and boys basketball and track, from the athletic boosters; $149 to the general fund, from Owen’s Electric; $146 to the media center, from Jr. Miss Montpelier; $2,860 to the Hall of Fame board and General fund, from Montpelier Rotary Club and $200 to Home Ec., from Williams County Dairy Association. The school board passed both recommendations.

In employment of certificated staff, the board passed the recommendation to move Kendra Michaelis, Lauren Rickenberg and Kaley Thorp to bachelors and move Marjory Snyder to masters on the salary schedule for the school year, to be paid on February 5.

They also passed the recommendation to approve Stacey Brown, Bailey Gerken, Charlene Johnson, Rickenberg and Thorp for Kindergarten screening at $21 per hour, 14 hours each.

In employment of classified staff, the board approved the resignation of assistant treasurer Lisa Fackler, effective February 4. They also approved Roberta Mercer and Keshia Shoup for Kindergarten screening at their regular hourly rate and approved Phyllis Johnson and Kaitlyn Tippin as tutors at $21 per hour.

In addition, the school board also approved to add Chelsea Smith to the substitute cafeteria list and to the substitute paraprofessional list. The unpaid leave of absence for Helen Elkins was tabled for later in the meeting.

Under purchases and service contracts, according to the agenda sheet, the Board approved “the Revised Foundation Reduction Agreement with the Northwest Educational Service Center to increase the estimated services cost foundation deduction.”

They also approved the agreement with Northern Buckeye Education council to provide Fiscal Support services through June 30, at $45 per hour.

In other business, the School Board approved the following: the membership to OSBA Legal Assistance Fund Consultant at $250, approved OSBA annual membership news, briefcase newsletter and School Management News, at a cost of $5,090 and approved the MHS wrestling trip to Woodmore and Fremont on January 7 and 8, 2022.. .

The meeting then moved to executive session, which is not open to the public.