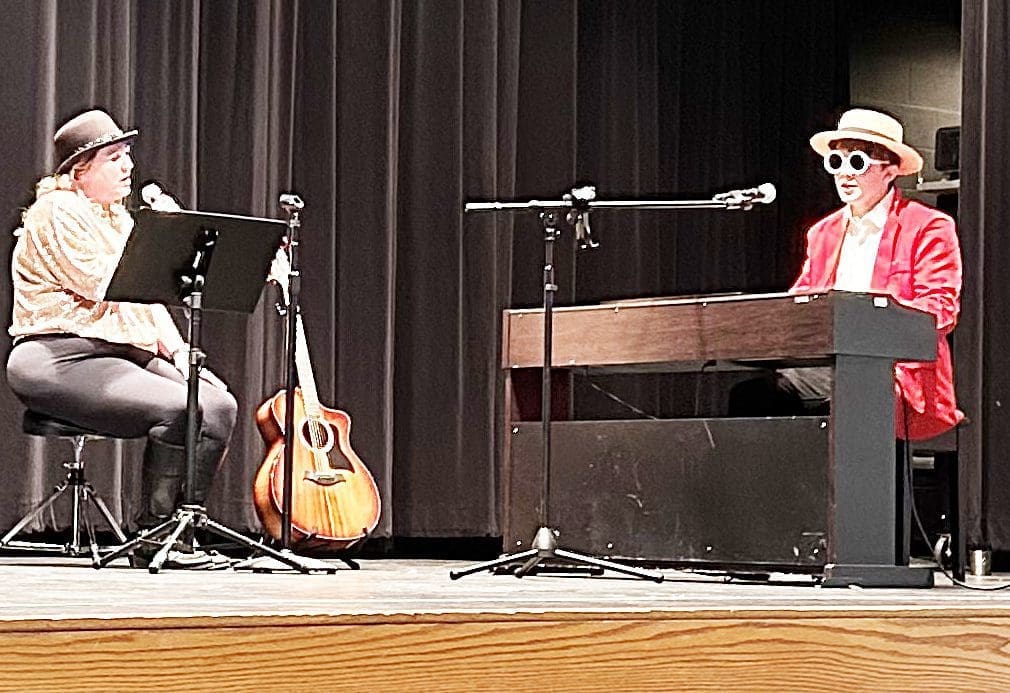 ELTON IS IN THE BUILDING…Quinn Mitchell, donning an Elton John costume, and Heidi Paxton share a few songs with the audience. (PHOTO BY AMY WENDT, STAFF)

On Saturday, January 7, the Fayette School was rocking with tunes performed by Quinn Mitchell and Heidi Paxton.

The benefit concert featured the duo performing various selections by Elton John with a few other artists’ cover songs sprinkled in.

Proceeds generated from the event were donated to the Nationwide Children’s Hospital in memory of Allie Herman.

Back in August of 2021, Quinn, a recent Fayette Local Schools graduate, started teaching himself how to play the piano by watching YouTube videos.

He has no formal music training and cannot yet read music. In the new hobby that he discovered, he found that he especially loved playing Elton John songs.

Quinn’s first time on stage was at a Coffee House event at Fayette Opera House, where local talent is invited to perform for the public by playing instruments, singing, telling stories, or reading poetry.

It was at one of his Coffee House performances that Quinn connected with fellow Fayette area native, Heidi Paxton, who shared with him information about other open mic events around the area.

Mitchell’s mother, Amy, helped organize the duo’s first concert together. She recalled that one day Quinn told her, “You know how I have wanted to do an Elton John concert with my music? “

“I’m thinking about having some sort of concert at the school for the hospital where Allie Herman was…How about I do a concert to help raise money for that [hospital] for other families who are still going through what the Herman family went through.”

“We saw how much the Herman family with helped by the people there,” continued Amy.

Quinn then set his plan into motion by reaching out to the Fayette School superintendent with the idea by asking if he could have a concert at the school.

Since he had previously sung with Paxton at other open mics, he invited her to join him to sing at the concert. Paxton, who also plays guitar, performs regularly at open mics and other area events.

Amy Mitchell shared her thoughts on the fundraising event and her son’s involvement, “The community is affected in ways that you don’t realize.”

“Quinn wasn’t Allie’s age, he didn’t really ever hang around with her…but I think this shows how much her life influenced people more than (anyone) will probably ever realize…Her legacy is living on in different ways…Hopefully, funds will be raised to help other families.”