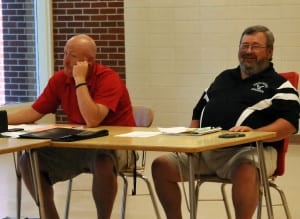 The question of just whose job it is to organize and work fundraising events for the 2016 North Central Prom was asked by concerned parents at the school’s Board of Education June Regular meeting.

Mike and Tamera Livensparger, who have a child on pace to graduate from North Central in 2017, spoke with the board about some reservations they had about the direction in which the funds for the school’s 2016 Prom were being procured, as well as how the ideas came to fruition. Chief among their worries was the lack of inclusion of the parents of the incoming junior class by the group’s advisor Thomesina Zuver.

Mike added, “Everthing is planned right down to the tee.”

Zuver’s plan for procuring Prom funds revolves around three sources of income; the selling of concessions during school sanctioned sporting events, a percentage from sales of online gift cards, and a Purse Bingo fundraiser to be held at the Pioneer Community Center on October 24. The latter event will serve alcohol during its operation, which is something with which Mike Livensparger took issue.

“That was a red flag to me,” he proclaimed. “It eliminates the kids from helping out.”

“A junior class advisor is probably the toughest position we have here,” claimed Rettig. “She tried to find somebody to help her.”

The Livenspargers then specified that their problems are with the way in which Zuver is running the fundraising campaign, with extremely limited involvement from the other junior class parents, and not with her personally.

“I’ve got nothing against Tommy doing it,” Mike stated.

In response to the presentation and subsequent conversation brought forth by the Livenspargers, the board, through school Superintendent Ken Boyer, have committed to investigating the matters mentioned by them further.

A new Master Negotiation Agreement between the board and the North Central Education Association (NCEA) was officially adopted at the meeting as well. The agreement will remain in place for three years, making adjustments to the pay schedules of the teachers within the district. Prior to the board voting to accept the terms, the Education Association had already agreed to the rules and bylaws lying within said agreement.

But that wasn’t the only interaction between the board and NCEA on the evening. In order to stay up to date with Ohio law, the district entered into a Memorandum of Understanding with the teachers’ union regarding the Standards-Based Teacher Evaluation Policy. The move was a mere formality, according to Boyer.

“We were kind of ahead of the game over the last few years,” the administrator confessed.

An obstacle standing in the way of Summer Field Trip transportation within the district has been overcome thanks to the assistance of neighboring schools. The North Central bus driving staff refused to reach an agreement regarding Summer travel, which required administrators to look elsewhere to meet the needs of their students.

“I would like to thank our neighboring school districts for their cooperation and help in transporting our students this Summer on scheduled field trips,” Declared Boyer.

He also expressed his appreciation for the district’s Transportation Supervisor, Eric Moreland. Not only has Moreland had a hand in organizing the support from other schools, but has served as a driver for some of those field trips as well.

The board approved the employment of a new Junior High Math Instructor. Tyler Tavierne was awarded a one year contract for the position, stepping in to replace recently retired teacher Jill Filler. Entering into the teaching profession directly after receiving his Bachelor’s degree, Tavierne received a vote of confidence from Rettig, who has known him for several years.

“I think he’ll fit in very well with what our junior high staff is doing,” Rettig theorized.

Also approved by the board were the hirings of Substitute Bus Driver Stacey Turner, and Summer Intervention Instructors Ashley Stewart and Sally Wheeler. The resignation of Junior High and High School Educational Aide Athletic Trainer Heather Mavis met with board acceptance as well.

As the meeting drew to a close, District Treasurer Eric Smeltzer requested a brief Executive Session to discuss compensation of benefits. No action was taken.