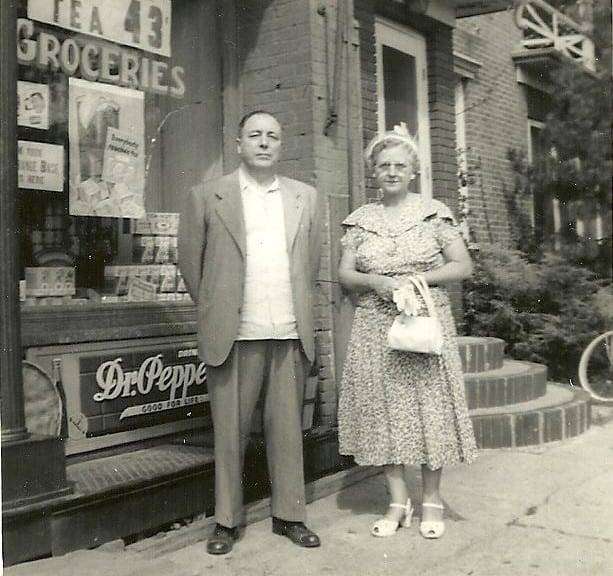 Going to the home of George and Darlene Burkhardt, in Edon Ohio to meet with them and George’s cousin Charlene Word to discuss the history of the Burkhardt family is a tremendous experience. Upon entering the “Man Cave” in the basement and seeing the documentation laid out before me, the first thought is, “We could be writing a book rather than a newspaper article.” So with that being said, we will do our best to condense all of this information about this fine family as well as we can without losing the pieces that makes the story so unique.

Many folks may not remember Burkhardt’s Grocery Store on East Indiana St in Edon, which is presently known as “Kaisers”. It was established by George’s great grandfather Lewis William Burkhardt and passed on to his father John Henry ”Hank” Burkhardt when he was 23 years of age.

Hank Burkhardt was born on September 6, 1893 in Edon, Ohio. He graduated from high school in 1913. He and his wife Eunice Christoffel from Newville “Gypsy Hill” Indiana were married in 1917 and became the parents of four children: Lewis, John Henry Jr., George and Ella Louise (Weasy) Berry.

Approximately six months after being united in marriage Henry Burkhardt was called to active duty in World War I, serving with company 9 of the 101st Infantry. He was wounded by shrapnel on October 25, 1918 at Verdun for which he received the Purple Heart. He was also involved in fighting in the St. Mihiel Sector and Meuse-Argonne, and served in France until April 12th, 1919. Upon discharge he returned to Edon and resumed his work at the grocery store.

Along with running the store with his family’s assistance, Hank was a lifelong member of St. Peters Lutheran Church, the American Legion, the Free and Accepted Masons, Edon Lions Club, The Ohio Highway Patrol Auxiliary, the city council and the local fire department. He also was a member of Veterans of Foreign Wars, Disabled American Veterans and of the Chamber of Commerce.

One of his favorite activities was his ownership of “Jimmie Watts”, a racehorse and cart which was driven by the late Lafe Hughart.

Hank was very involved in every aspect of the community and this was passed down to and through each and every one of his children over the years as they have been very active in community functions too.

Besides being a very devoted housewife and mother and helping out at the store, his wife Eunice was a very talented pianist and songwriter. While attending the Lutheran Church in Edon over the years one would experience the musical talent passed down to her children as their voices would resonate throughout the sanctuary in the singing of the hymns that were being played during services. Some of them singing in the choir and others from the pews.

Burkhardt’s Grocery store was one of the main hubs of activity in the community for many years. It was not only a place to purchase groceries, but a place to see and visit with many friends on a regular basis.

As George and Charlene sat at the table reminiscing about the store many great memories began to flow and we went back to a time when things were much simpler and much different from today’s markets. Folks used to enter the store and hand one of the clerks their grocery list and the clerk would then proceed to go gather all of their groceries while the customer stood up front and visited with everyone.

If a customer so desired they could call in their grocery list and the items would be gathered and delivered to their home for them. This meant the clerk who delivered the groceries always had to be sure they had the proper change in hand in order to complete the delivery.

In the early years “Hank” would go out in a “Huckster Wagon” to purchase eggs from local farmers and at the same time sell goods to them. That “Huckster Wagon” is presently on display at the Williams County Historical Society and is over 100 years old.

Being on the local fire department was also an interesting process for “Hank” as they had two telephones mounted in the stairwell. One was black and the other was red.

When there was a fire in the community the local operator would dial the red phone and then “Hank” would have to run across the street to the fire department to ring the bell to call all the firemen to respond. Later on there was a siren installed to replace the bell, but the same process stayed in place for many years.

The store was a great place for local schoolgirls to find employment to help with the household and school expenses and George said the list of girls was too long to remember. He and Charlene mentioned several of them but didn’t want to overlook any of them so they are not listed here. George said every one of them were fantastic and helped not only as cashiers but in nearly every area of running the store from stocking shelves to cleaning, etc.

Another aspect that was mentioned was that since Hank’s mother was of German dissent and he had grown up speaking German and English, the Amish community that established homes nearby loved to come to the store and be able to communicate with him in German.

Over the years the store has survived a major burglary and vandalism and also a major fire. While being huge setbacks, with a lot of work and cooperation both of these events were overcome successfully.

The store was owned at one time by Henry and his sons John and George, then eventually by just Henry and George.

The decision was made in 1979 to sell the store. This was a very difficult decision to make after all these years, thus ending a long and lasting historical business in the village of Edon, Ohio.

The loving personalities and dedication to the community that Henry and Eunice Burkhardt established during their lives and passed on to their four children has also been very evident in this community over the course of the past several years. Lewis, John, George and Ella Louise (Weasy) Berry all made Edon their home and were very active by having their own businesses and being involved in community events.

All of them raised families here and were very involved in church and school functions and community events, etc.

Lewis owned The Pure Oil Company, George and John, both after leaving the grocery business, became mail carriers for the local postal service, and Weasy and her husband Carl owned the local meat market for many years.

George is now the only child of Henry and Eunice that is still living and his wife Darlene is presently serving as Mayor of the village.

Through the years and as time goes by one will never know the full impact that this family has had on different individuals that they reached out to over the years. As stated earlier a book could be written about this family and each and every member has continued to carry on the tradition of love and activity in the community that they have called home for many years.

And it all started with a Huckster Wagon and a Grocery Store!

John Winright may be reached at publisher@thevillagereporter.com

2 Comments on "The Burkhardt Name: A Major Part Of Edon’s History"