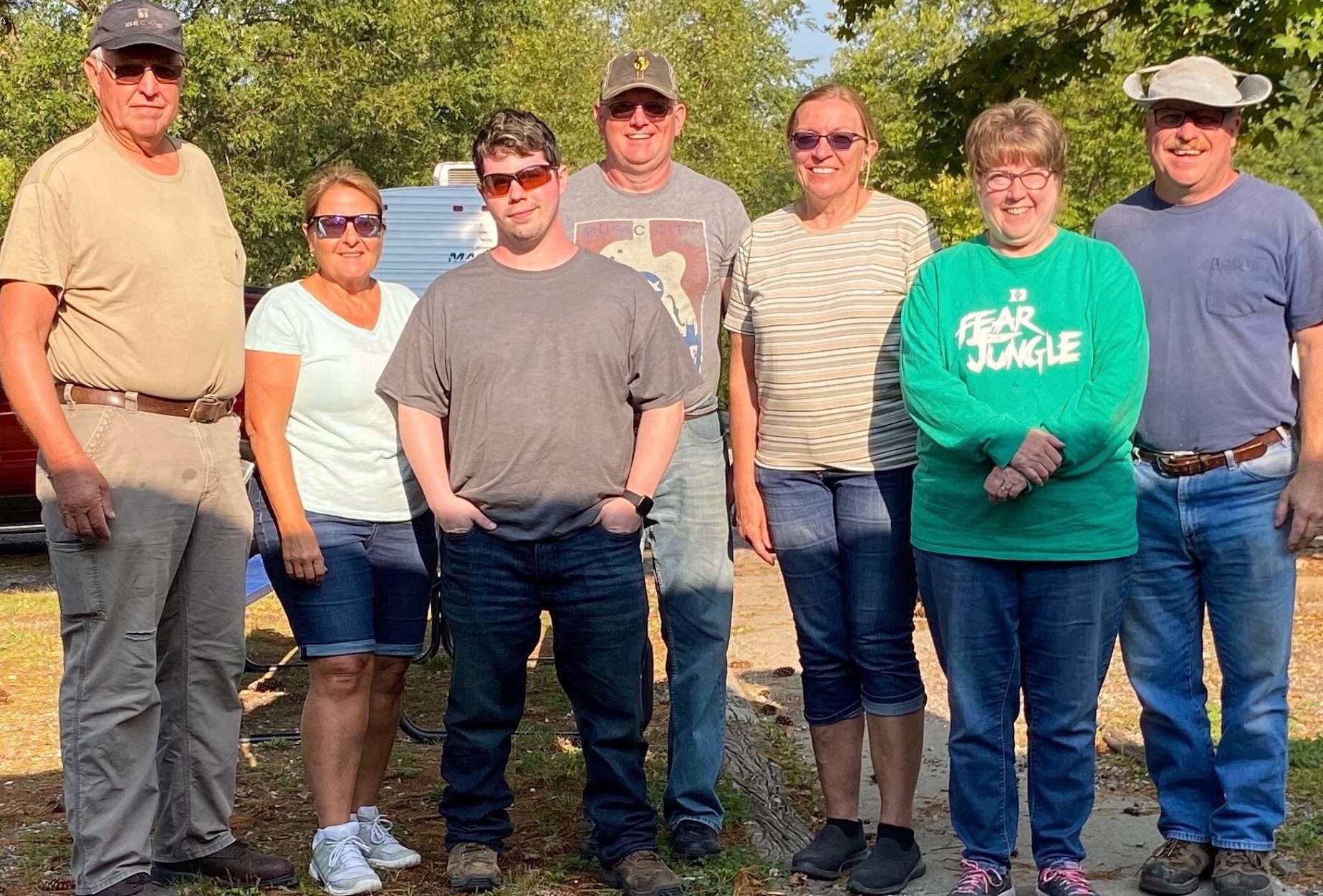 THE “OHIO ANGELS”… This group became fondly called “The Ohio Angels” by the recipients of their help in Iowa in September 2020. From left to right are Don and Josie Heilman, Andy Mehaffey, Mark and Janice Andrews and Sue and Ted Blohm.

A team of seven from Northwest Ohio recently traveled eight hours away to the small town of Atkins, Iowa, to assist in clean up from the horrific damage cause by a Derecho.
From the lack of coverage on national news, not many were aware that a 770 mile swath of Iowa got slammed on August 10, 2020 with 140 mile an hour straight-line winds for three solid hours, causing an incredible amount of damage to every town and every farm in it’s path. Since then it has been shown that some areas even had tornado action as well during the storm, which added even more damage.

Ted and Sue Blohm from Swanton, Ohio, headed up the team which was made up of two other couples and a young man who also felt like he should go. From their church family, at Christ Community (CCC) in Ridgeville Corners, Mark and Janice Andrews and Andy Mehaffy jumped on board, and from Whitehouse, Ohio, semi-retired farmer Don Heilman and his wife Josie joined after hearing about the trip on AgNet. They all arrived in Atkins on September 12 or 13 and the last of them left on Sunday, September 20.

Driving four vehicles allowed each family to head home when they needed to go, as well as giving them plenty of horsepower needed on some of their jobs while there. All of their trucks, plus a few tractors from Atkins farmers, and some bobcats with claws were put to good use.

Team members all shared their thoughts on the venture, some at CCC on Sunday, September 27, some in a personal interview and some on the phone. The team got to take a tour of some of the area on Sunday, September 13, and were shocked at the extensive damage. “On some of the streets, EVERY house had a tarp on the roof. If you can picture Williams, Defiance, Fulton and Henry counties all hit with 140 mile winds for nearly an hour, that is how much land was slammed.

Sometimes people would come up out of their basement thinking it was over and it would start up again!” Sue shared. Surreal was a word that described the way things looked, with huge pieces of barns lying hundreds of yards away, whole roofs blown off of large buildings, and twisted parts of grain bins lying way out in the fields.

They got to meet the famers and people with whom they would be working. The church family, at Pleasant Hill Presbyterian Church in Atkins, met them on Sunday and explained they would be bringing meals the next day. They did that every day for the whole week, providing delicious lunches and suppers for the whole team, along with “precious fellowship,” allowing the team to focus on using all of their energy in the clean up of specific homes and farms.

Sue had planned the meals for the week and all the food necessary for those meals had been taken with them, so at the end of the week the team donated all the food they had brought along to the Local Food Pantry. “We didn’t eat it and it only made sense to not bring it home,” Sue said. “The food pantry was running low and since the church had provided for everything but our breakfasts, we were so happy to give it to their community.”

Some of the jobs they took on were: removal of three humongous piles of brush and trees that had been piled in a field near the church; cutting and hauling, to the edge of a yard, of eight large black walnut trees that had all been blown over, so that others can go in and cut it into pieces; tearing up the floor of a damaged grain bin and pulling nails our of boards.

Janice Andrews was thrilled, that as someone raised on a farm and who got to drive tractors as a teen, to get to drive a tractor one day on the job. “It was such a joy! The tractor was a lot newer than anything I had ever driven, but I did fine and pulled a wagon as the guys loaded it with brush that needed to be moved out by the road where the village crew could take it away.” Her husband Mark explained that there were pieces of bins and trees that were way too heavy for them to pick up and the bobcat with a claw was so helpful for that.

They also took the floor out of a bin, to save the wood for them to use for rebuilding. With the shortage of wood available for purchase out there, every board mattered and they pulled nails and stacked it for use in the future.

Andy shared that it was very out of his comfort zone as he has a number of health issues, and it meant so much to him to be able to help someone else. He really wished they could have stayed longer, but shared the importance of “the starfish principle” based on the story of the little boy who was throwing starfish off a beach back into the sea.

Ted Blohm shared that while they were out there working, they did not see others helping. “You have to realize, they are ALL in the same situation! They are so busy just trying to survive this and get done whatever they can. One farm where we worked was all relatively new bins and barns and they were completely ruined. “

“They were also busy gathering their cattle or pigs and determining how much loss there was. The crop insurance agent came while we were there and it was a two thirds loss of crops on the farm where we were.”

Besides crop loss and building damage, the utility poles were all flattened for miles, leaving thousands out of power. When they were there, there were parts of Cedar Rapids as well as many farms still out of power. Even when the poles were back up and power was restored on the roads, each farmer is responsible for getting it from the road to their homes and barns.

Ted also said that there was way more to do than they could possibly do. Lana Robison, their contact person for the trip, and her family became lifelong friends, as she set up their daily projects and worked with them to get as much done as possible.

Near the end of the week, State Representative Thomas Gold joined them with his tractor and hayrack and worked along side the team all day, hauling trees and brush. Some of it had to be hauled almost a quarter of a mile so they used as many trucks and tractors that day as they could get out into the field. The lady whom they helped by clearing the eight trees out of her back yard, also loaned them her tractor to use at a farm a mile down the road the next day.

Each member of the team was so glad that they went and highly recommend it to anyone who can, to do so, as it was a very fulfilling experience. Mark Andrews shared, “This was my first time to ever go on a trip like that. I was real excited by the team work and all that we accomplished. In just two days that Janice and I were there, we couldn’t believe how much we all got done. I was shocked by how much wood we were able to save.”

Janice Andrews added, “It was a great team. We worked so well to get things done. The people who fed us were awesome and the fellowship we had with them was sweet. I have always had a desire to do something like this and it was my first time. It was so good to jump in and help for these people who have so much on their minds.”

“We didn’t have to worry about all the things they do so we could just jump in and help. It was great that a place was provided for us to stay.” Camp IO-Dis-e-ca house Andy, Mark and Janice in a lodge the whole time they were there and opened their facilities for the team to prepare and eat breakfast together every day.

Don Heilman had been on several mission trips in Texas and Florida after hurricanes and had worked on houses. “I saw the announcement about the upcoming trip on the morning broadcast show on AgNet and called Ted to ask if I could join. I just wanted to go and give them a hand. We couldn’t help everybody but we helped those we could.” He operated a chain saw quite a bit for the church property clean up as well.

Jodie, his wife, shared that at first she wasn’t planning to go, but Sue talked her into going along. “She said she was going to be the only woman, before they knew Mark and Janice were going, and she would love to have me come along. I prayed about it and went along and there was plenty to do! We met so many nice people and tried to put ourselves in their place. What would we want people to do if this had happened to our farm?”

Team members all stressed the point that they will be cleaning up for a long time out there as there is a lot of work yet to be done. Sue shared, “For me it was about getting out of the boat when God says to get out.

When I mentioned the idea of going I thought it was a big stretch, but we did it. A different analogy, but I never want to be like Jonah and disobey God, so I encourage everyone to obey when God speaks. The whole team chose to say yes to Him and we all went.”

Ted added, “I am in awe of the team and how God put it together. The camaraderie was great! We got along so well. We started every day with devotions together and we flowed so well all day. The joy was amazing. We were all laughing. No complaining. It was hard, hard work and we were exhausted, but the attitudes and atmosphere were so terrific.”

He offered to have anyone interested in putting a team together to contact him at tsblohm@windstream.net, and he will connect you with the people out there.