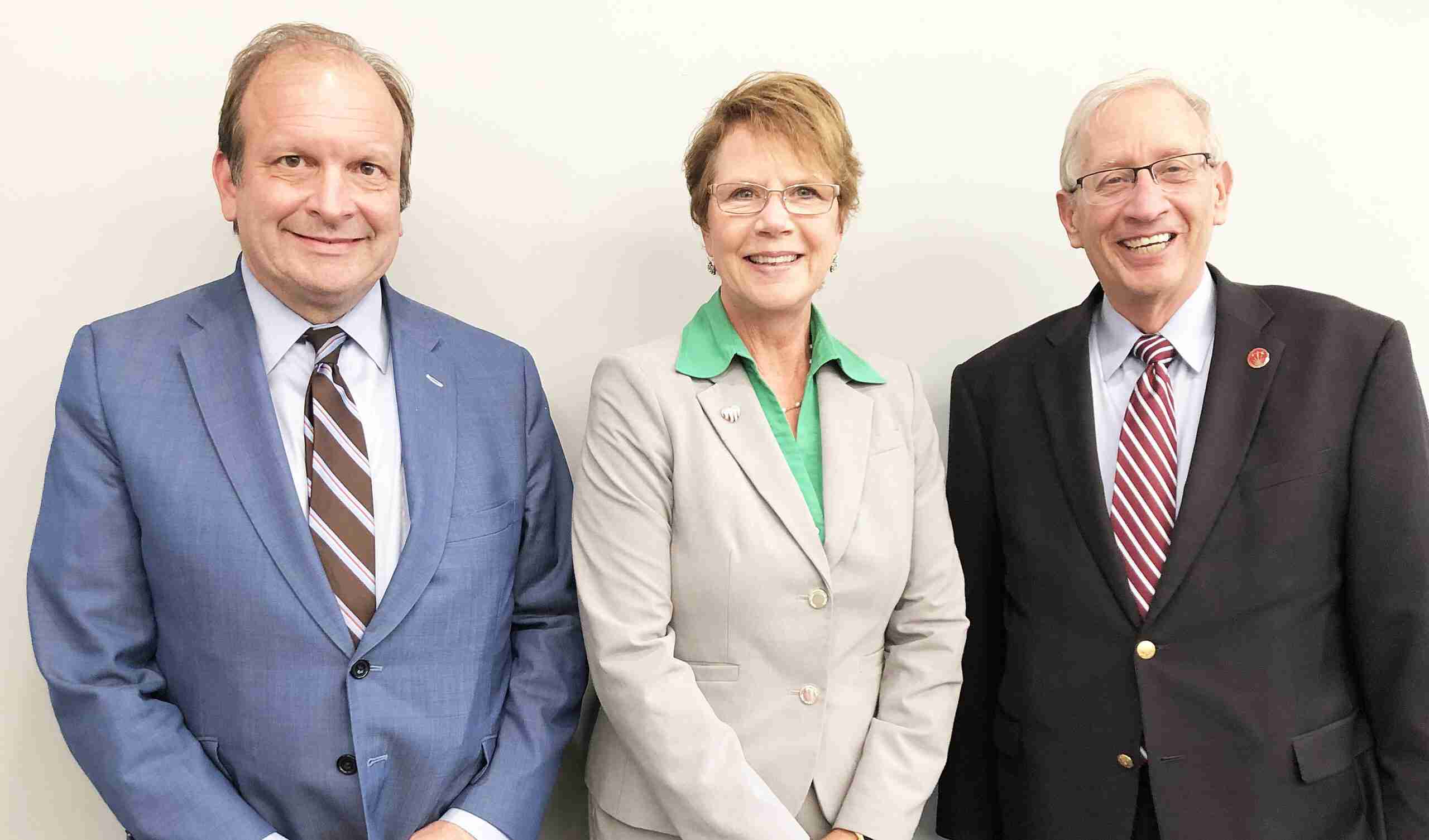 CONSTITUTIONAL CONSERVATIVES … Ohio Supreme Court Justices Pat DeWine, Sharon Kennedy and Pat Fisher will be on the ballot this November. DeWine and Fisher are running for re-election and Kennedy is running to fill the position of Chief Justice. Chief Justice Maureen O’Conner has termed out as she has turned 70. (PHOTO BY REBECCA MILLER, STAFF)

Three of the Ohio Supreme Court Justices were present in Williams County on Monday, June 27, 2022, as a part of a Northwest Ohio visit concerning their re-election (for Justice Pat Fischer and Justice Pat DeWine) and a run for Chief Justice for Justice Sharon Kennedy. While here they spent a half hour answering questions for the local media.

Concerning the change on the ballot that is coming in November of 2022, that party membership will be listed beside the names of Justice nominees, all three shared their thoughts.

The question asked was, “If Supreme Court Justices are supposed to be nonpartisan, will putting the political affiliation/party names beside the Justice nominee names on the ballot not be a partisan move?”

Justice DeWine stated, “Ohio has always had partisan primaries for Judicial. That goes back to 1914 or so. We have always run in a Republican or Democratic Primary.”

“The only change now is that the information will be on the ballot, so it will be transparent to the voters which party we were nominated by.”

The follow up question was based on information that in the past many voters have left the Justice portion of the ballot blank.  “Is it the hope that if voters know which party a Justice is affiliated with, they will be more likely to choose?”

“It is believed that the undervote was caused by a lack of party affiliation,” Justice Kennedy said. “That is one of the hypotheses.”

Justice Fischer added, “We will find out in November if putting it there causes more people to vote.”  Justice DeWine said that in some states where they do have the party affiliation on the ballot, they tend to have more votes cast for the Justices.

When asked, “Is this not the type of issue that the parties have switched on? Right now, the Republicans want it on the ballot and the Democrats don’t, but in the past, it was the other way around.

The Democrats wanted it and the Republicans didn’t. It seems to depend on the culture at the time as to whether you want it or not.”

Justice Kennedy said that she agreed with that statement, “Historically speaking, they wanted it on and then Republicans want it on and they don’t want it on. It comes down to where they think the state is and the position of that party.”

“Ohio, if you look at the last 2020 Presidential cycle Trump won Ohio by 8.5 points which is unheard of, which is the highest victory, so that really gives you that sense of the same with 2016.”

“He won Ohio with 8 points. So that trend is where the state is voting wise.”

The concern was brought up that Justices used to be seen as focused on right and wrong and now the politics of it is about power, grabbing power and hanging onto it, politicizing every issue that comes along.

“Do you really believe that you are seeing justice and truth and ruling on that, rather than politics?”

Justice Fisher said, “I think so.” He went on to share how he wrote a paper for a topic and then a few years later he looked at a specific case and voted the opposite.

“If you get the right judge, they will look at each case on its’ own facts and that’s what matters. Not what party they are from. If you look at our docket, 70% of our decisions are unanimous or 6 and 1. We do enforce it as it is written.”

Justice DeWine stated, “To me it is not about party. What is important is about Judicial philosophy. Judges have different judicial philosophies. I am someone who is a constitutional conservative.”

“I believe our role is to apply the law as it is written. Another judge may have a much more activist judicial philosophy.”

When Justice Kennedy was asked her thoughts on it, she said, “I agree with that. I believe that is the stark contrast when you start speaking to voters. I do door-to- door and they want to know where you are on that continuum of judicial philosophy.”

“So, for me, that conversation is always, ‘who are you as a judicial thinker?’ We call it ‘judicial restraint’ but it is really known as ‘specialism.’

You say what the law says, decide only what is necessary, and as a result you give forth that meaning. Talking about constitutional provision, we also believe that it is about the time in which it was written.”

Justice Fisher pointed out that it is not so much about party as it is about whether a judge is for judicial restraint or judicial activism.

He spoke of a decision when four activist judges voted together and two were Democrat and two were Republican, to illustrate this point.

When Roe v. Wade was brought up the Justices explained that at this point in time they cannot talk about that because they still have “cases pending about the Heart beat bill.”

Fisher said he does feel that in the beginning, Roe v Wade was judicial activism. It was “legislating from the bench.”

They all agreed that the Legislature should be the branch of government that is making the laws and policies. The Court should not be making policy for the state.”

“They should look at the record and apply the law, settle the law, not create the law. “Judges’ personal policy preferences becoming the law is dangerous for democracy,” Justice DeWine stated.

It was a short but powerful half hour of discussion, with give and take in the room. Following the media time, they were taken to Stoney Ridge for a meet and greet.