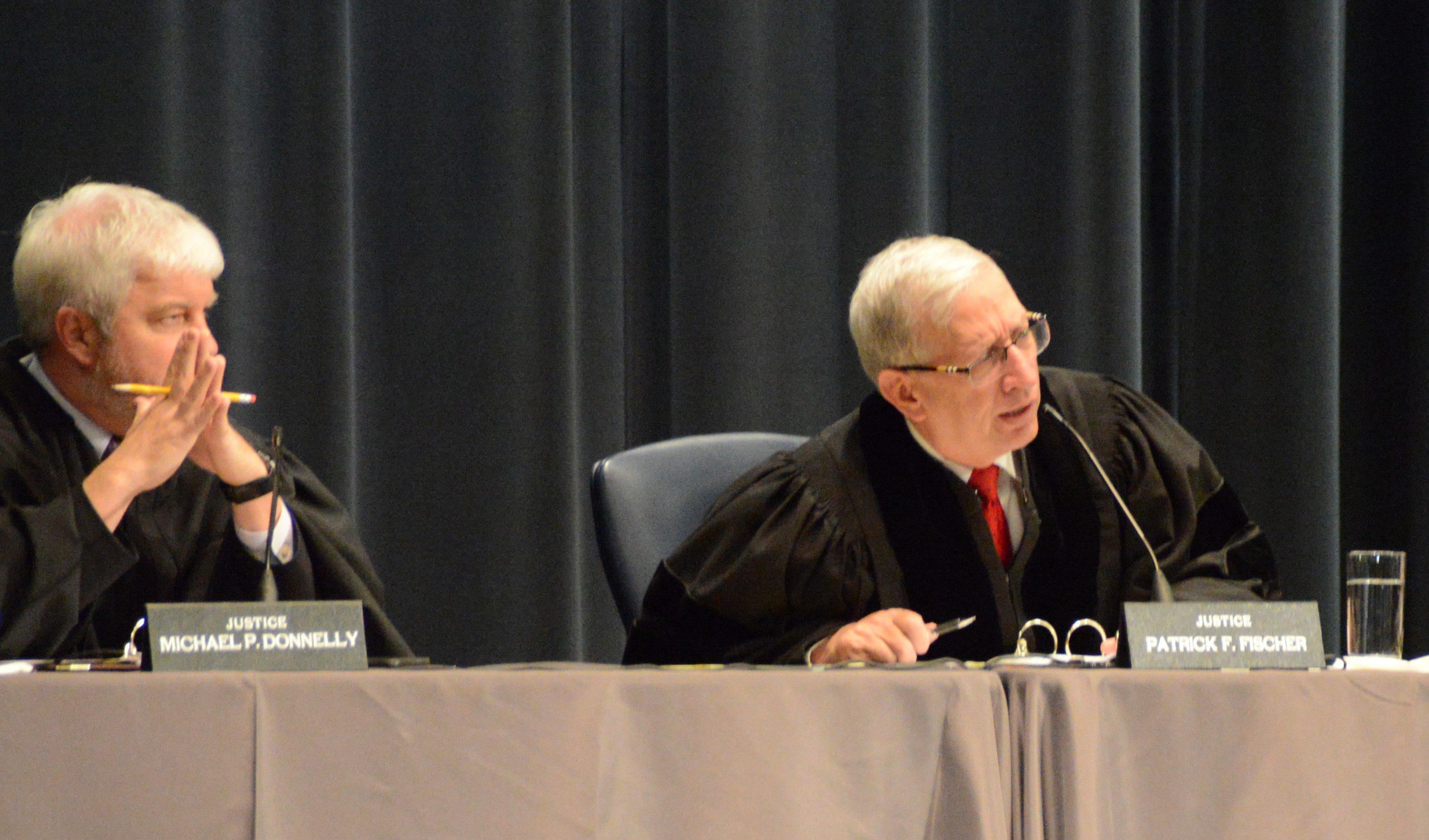 he Ohio Supreme Court Off-Site Court Program, an educational outreach program begun in 1987 by chief Justice Thomas Moyer, is designed to educate high school students and other Ohioans throughout the state about Ohio’s judicial system. “For American democracy to function well,” said Chief Justice Maureen O’Connor, “…it is critical that our citizenry understands how our institutions of government work.”

Twice each year, once in the spring and once in the fall, the Supreme Court of Ohio relocates from the capital city and holds sessions in another community, selecting a different county each time. On the morning of October 23, the Justices of the Supreme Court of Ohio convened for the 77th session of the Off-Site Program, hearing oral arguments before Williams County high school students and concerned citizens in the auditeria of the Montpelier School. Some of the concerned citizens traveled almost four hours to attend the session.

Prior to hearing arguments, the justices held a question and answer session with some of the high school upper classmen who gathered from across the county for the event. The jurists gave open and honest answers to the questions posed to them. Some of the responses came as a surprise to the students, like the one given by Chief Justice O’Connor when asked if a law degree should be pursued by a student that aspires to be a judge.

Justice O’Connor said no, as that would only serve to narrow the scope of a student’s education. She noted that Justice Michael Donnelly is an avid musician and Justice Melody Stewart is an accomplished pianist, and neither of them set out to become a judge.

The justices heard oral arguments on three cases. The first case, Youngstown City School District Board of Education et al. v. State of Ohio et al., sought to determine whether or not the Ohio General Assembly violated the Constitution when they approved the takeover of underperforming schools without the use of the three-reading rule.

The second case, State of Ohio v. Clinton D. Faggs III, dealt with the corporal punishment of a seven year old child and asked, when charging an individual with domestic violence, must the State prove that said parental discipline was unreasonable?

The third case was particularly riveting in its context. In the case of State of Ohio v. Keith Nettles, the appellant, Nettles, was found guilty of the trafficking of cocaine. Nettles argued that the clandestine cell phone intercept that aided his conviction was illegal, and that his conviction should be vacated.

The issue asked when a law enforcement officer seeks a warrant to intercept a criminal suspect’s telecommunications, must the judge issuing the warrant be located in the county where the targeted phone is located or where the officer’s listening post is located? In this case, Nettles was operating in Sandusky county, and the intercept point was in Toledo in Lucas County.

After the oral arguments were heard in all three cases, the students were divided up into three groups, where they were debriefed about one of the three cases heard that day. The students then engaged in a question and answer session with the attorneys arguing before the justices.

Again, some of the questions and answers were surprising in their delivery. For example, a student speaking to the counselor representing Mr. Nettles, noticed that he was stuttering a lot in speaking to the justices, and asked if he was nervous. His answer was an emphatic yes, noting that this was the first time that he had come before the Ohio Supreme Court.

The comments from the educators and administrators from around the county reflected how awe inspiring the day had been for them and their students. “Obviously it was an honor to have the Ohio Supreme Court here, said Kermit Riehle, Superintendent of the Edgerton Local School District.”

“It’s something that just doesn’t happen every day here in Williams County. It was a privilege to have The Supreme Court here in Williams County; we’re excited. It was a privilege for our kids to experience something like this, for us to be able to bring our senior government classes over to Montpelier for this event. It was just an amazing opportunity for them, and it was a learning experience for us, a great educational process on how it works with the deliberation through these cases. It’s an eye opener for us.”

Su Thorp, Montpelier High School Principal, said, “I thought it went extremely well. I think that it was a wonderful opportunity for both our community and our students to witness such an event that’s probably going to be a once in a lifetime happening. I think that the students were well prepared; they asked wonderful questions of the Supreme Court justices, and I felt that the justices were very impressed with how our students conducted themselves. It was an overall learning process for everyone.”

“I thought today was a fantastic educational experience for the kids,” said Dr. Jamison Grime, Superintendent of the host Montpelier School District. “You know, in my 23 years of doing this, I’ve never had anything like this happen for a school district that I’ve been at. To actually have the Supreme Court come here and try cases and have the kids be able to see that in action, and be able to talk to the attorneys…that’s something that just doesn’t happen every day. It’s a really proud moment for Montpelier and Williams County.”

Dr. Grime continued, “I think it’s important that kids today understand their government, know how to be active in the government, and know what the government functions are. Every year you go in voting for these Supreme Court justices, and a lot of times you don’t even know who they are.”

“I think that in order for us to succeed as a society, we have to be informed voters. We have to know what the government does. What does the Supreme Court do? Why am I voting for this justice over that justice? I think it’s important for kids to know how the branches of government work, and how this all plays out.” 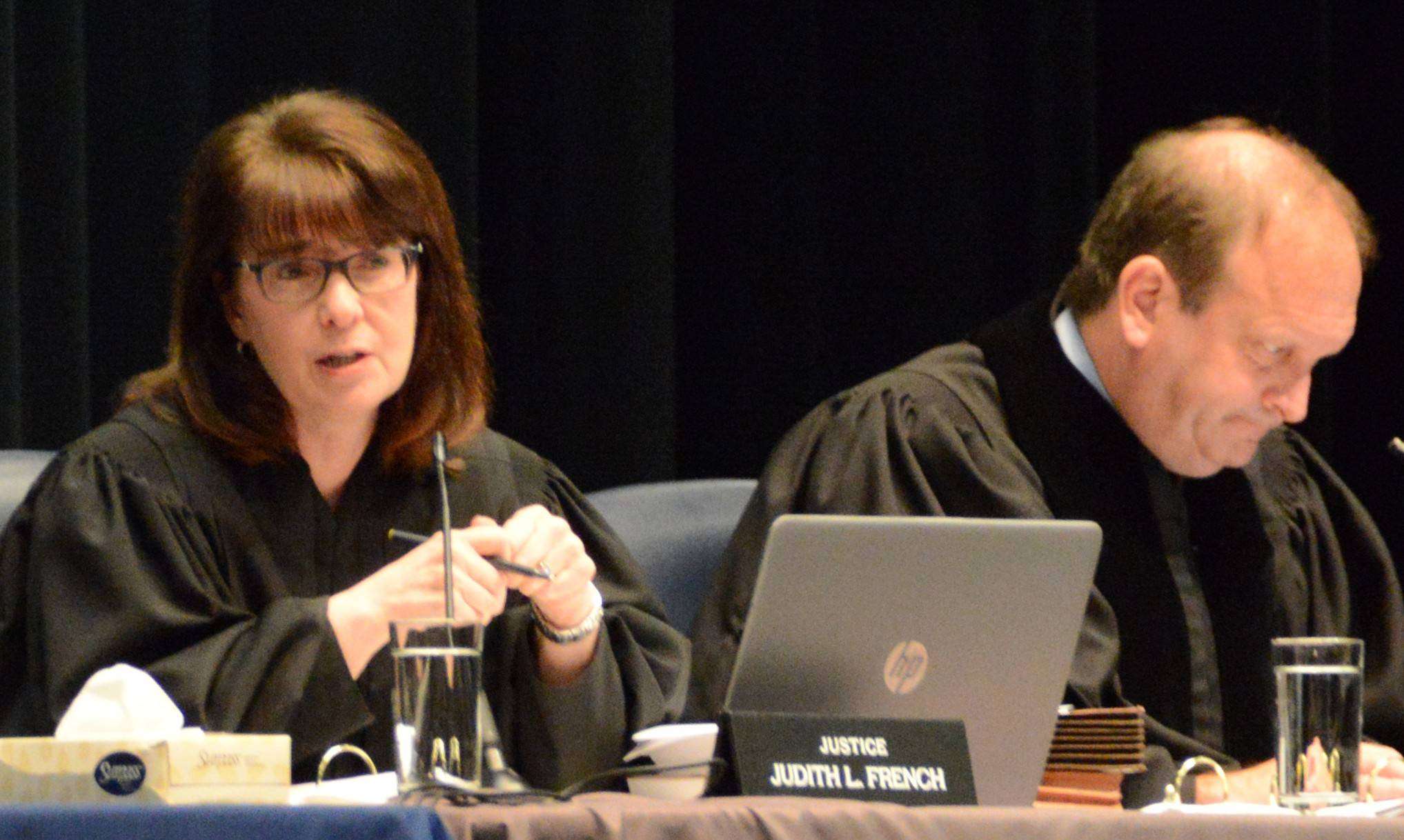 Supreme Court Justice Sharon Kennedy said, “The Off-Site Court is one of the most amazing civic educational programs that the Supreme Court of Ohio runs. It truly gives students the opportunity to really see the real world of what it looks like to be at The Ohio Supreme Court. To see the lawyers engage in oral argument; to see the lawyers answer the questions of the justices, and what that process looks like.”

“I think there’s a disconnect in society about what do judges really do, what really happens in a court. Unless you’re actually a participant, a party, most people don’t end up in a court setting. But I actually think that for those individuals or young people who attend, they not only get to see the Court and action and try and understand what’s happening there, but it also gives young people the opportunity to see the possibility of, ‘what if.’ What if…me?”

“You know,” Justice Kennedy continued, “I never started my life as someone who believed I was going to be a lawyer or a judge, let alone a Supreme Court Justice. I really believe there was a limitation in my life based on socioeconomic parameters of my family, despite the fact that my parents gave me the promise of America and the American dream…decide, commit, work hard, have fortitude, and you too can achieve your dream.”

“There always seemed to be some barrier for someone like me, but it was a high school teacher and a five-minute conversation that said that I could do more than just that. I could be a lawyer and a judge someday. Law enforcement, serving as a police officer, gave me my first ability to shake the hand of a lawyer and a judge. There were some really wealthy ones, some generational ones, but there are a lot of them just like me, whose parents grew up poor in the Great Depression.”

“Here they are, lawyers and judges today. So I really hope the second takeaway for young people is…they too can do this. Everybody comes from different walks of life, but if that’s what they aspire to do, there is a pathway for all of us to achieve that.”