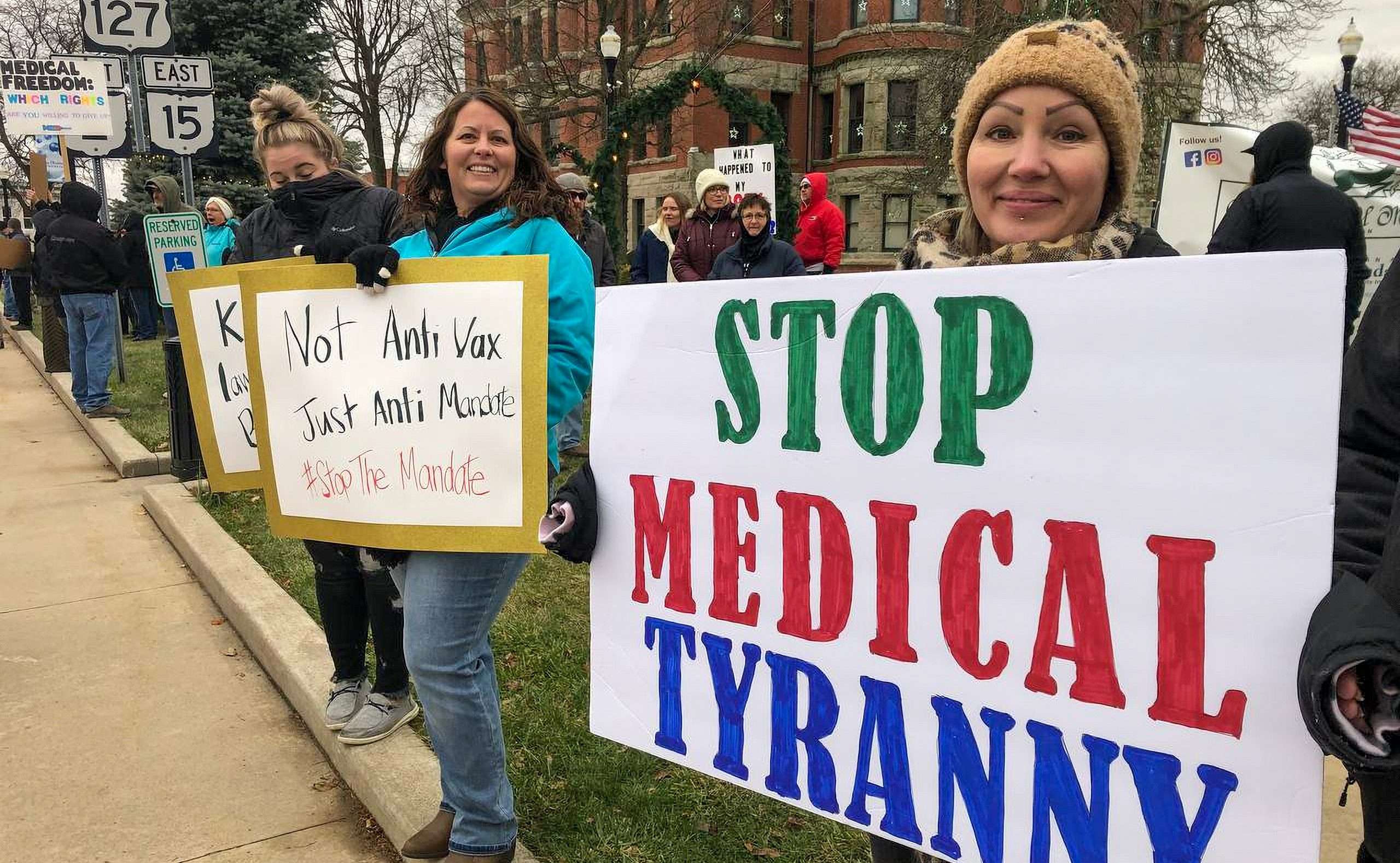 PROTEST … Demonstrators protest in front of the Williams County Court House in Bryan against the vaccine mandate for health care workers. (PHOTO PROVIDED)

Sunday, December 5th was a cold and windy day in the area of Bryan. This did not stop residents of Williams and other surrounding counties from coming out to protest the vaccine mandate that had been issued for health care workers from the Centers for Medicare and Medicaid Services.

The vaccine mandate was issued on November 5th, 2021 and applied to Medicare and Medicaid certified providers and suppliers.

This includes hospitals, long term care facilities, nursing homes, and other types of medical facilities. In order for employees to be compliant they would have to have received their first shot prior to December 6th, 2021 and be fully vaccinated for COVID-19 by January 4th.

Many health care workers locally and across the country are opposed to the mandate for numerous reasons, with the biggest consensus surrounding personal freedom and religious exemptions.

Some of the health care workers, and residents in the surrounding areas, felt as though these rights were being taken away with this mandate and organized a protest.

The protest was originally to take place in front of the CHWC Hospital in Bryan, however due to the overwhelming response, Sarah LeeAnna stated that the event had to be moved.

Sara is one of the organizers for the protest and explained that with the overwhelming response they received, there was a fear of blocking access to the hospital. In order to make sure that did not happen, permits were acquired, and the protest was moved to the square in front of the courthouse.

Sarah also explained the purpose of the protest. “I have never organized a protest, but when the mandate came out from CMS it made me feel like, that as an American, it didn’t seem right. I understand people feel very strong about this issue, but as Americans we want our right to make choices.”

Sarah works at the Bryan Hospital and stated that the majority of her co-workers in the pain management office are unvaccinated as are around 40% of other workers in the hospital right now.

“We are already very severely understaffed due to either illness or workers taking jobs at other hospitals. The hospital already had to close down all overnight elective procedures in order to keep staffing for critical areas.”

“If the hospital would be forced to lose 40% of its workers or even 10% at this point, I would be afraid that it would have to close its doors and that isn’t fair to the community,” said Sarah LeeAnna.

She also explained that the protest was not directed at the hospital as they are not the ones mandating the vaccine.

The protest itself took place from 1 p.m. to 3 p.m. and drew in a large amount of people. Cars and semi’s passing by also showed their support to the demonstrators standing in front of the courthouse.

Demonstrators held American flags and signs that said things like, “Not Anti Vax, Just Anti Mandate,” “Freedom is Essential,” “It is not about health, This is about Freedom,” “Nurses have medical rights too,” and “What happened to my body my choice?”

The protest remained peaceful throughout the day. Demonstrators were instructed to not bring any signs that were not in support of fighting against the mandate such as Trump, Biden, anti-vaccine or pro-vaccine signs.

Sarah LeeAnna explained that around 90% of the people who showed up came for the right reason and that if she has to organize another protest, she will try to get the word out more to attract even more people.

“Hopefully we never have to do this again but if we have to, we will,” said Sarah LeeAnna. Currently, the mandate has been put on hold due to injunctions that were put in place by U.S. District Courts. Appeals have been filed by CMS and the cases are pending.