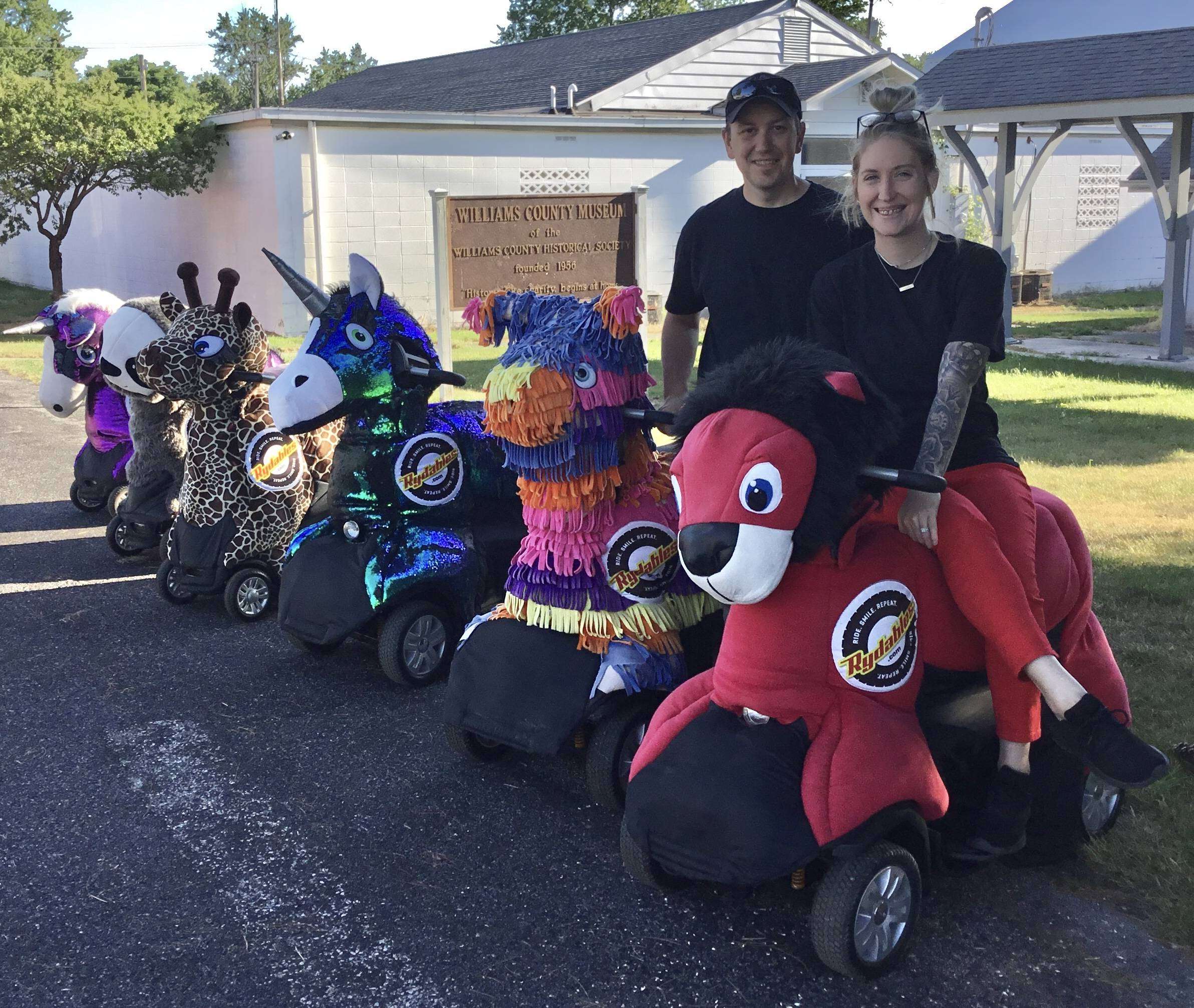 FURRY OVERSTUFFED ANIMAL KARTS … Duaine and April Cluckey posed on the Lion Kart which was set up outside of the Fair Office Building at the Williams County Fairgrounds. “Cluckey”, as Duaine is called and April his wife, met with the Fair Board at the June 17, 2021 meeting to request that they be allowed to set up a “race track” of sorts for these gentle motorized creatures to be used during the fair. (PHOTO BY REBECCA MILLER, STAFF)

The highlight of the Williams County Fair Board meeting held on Thursday evening, June 17, 2021 was a presentation by Duaine and April Lynne Cluckey.

The couple was a part of the Fair in the past with Magic, Karaoke and the Cheerleading Competition, but this year they are hoping to bring a brand new event to the Fair.

Created and sold in Tempe, Arizona, the Rydables, or Furry Overstuffed Animal Karts as the Cluckeys call them, have not been seen in very many places yet.

“Cluckey”, as Duaine is called, has been in negotiations with the company to bring down the prices to make it affordable for the Fair to have them.

They can be found online and are described as “electric, battery powered carts designed for both indoor and outdoor mobile entertainment uses.”

Cluckey and April brought along six of them all dressed for the fair as two Unicorns, a sloth, a giraffe, a piñata and a lion.

Some of those in attendance gave them a whirl during an Executive Session in which the Board had to be alone for some discussion.

The couple explained that these new Rydables are popular at schools and as Fund Raisers, but they are hoping to set up a spot at the Fair where fairgoers can enjoy a ride for the cost of only $5. They are good for any age and can hold up to 400 pounds.

The controllers set the speed that they go which will probably be around 3 miles per hour on the “racetrack” which they want to set up, but they are limited to 8 miles per hour under normal circumstances.

The Cluckeys also hope to share all of their services at the Fair, including Magic, the Photo Booth, Karaoke and even an Interactive Floor which has 150 games installed in it.

The Fair Board thanked them for coming and even asked them to hang around till after the meeting was over so they could take a ride to see what they think.

It was requested that they check to see what Fair type animal “skins” they can get, such as a goat, pig, cow and horse.

They said they will do so and get back to the Board. Cluckey suggested that as they make a big show of it, announcing the riders and on what animal they are riding, the animals could be sponsored.

For example, if they do get a pig cover it could be sponsored by the Pork Producers and that would be heralded over the speaker every time someone is riding the pig, etc.

She said they had so much fun that they would like to host an event of the same kind and requested that the Fair Board approve and schedule such a night.

Heavenlee’s mother, Summer Owens who is a member of the Fair Board, shared that some possible items at the event would be an Outhouse Race, Haystack Competition, Cow Patty Bingo, and anything else the Jr. Fair Board thinks up.

Some discussion was held as to how and where the events would be held and later in the meeting, the Fair Board approved a motion to allow a Jr.Fair Board event to be held on Sunday evening and that all money earned during the event will go to the Jr. Fair Board.

In other business, President Matt Kennedy led the board in the approval of the minutes of the May 20, 2021 meeting, the Treasurers report and discussions of a number of topics. It was reported that the final results from their audit came and they were good.

An area resident has offered to donate the funds for concrete for benches when the time comes. Another interested person asked if they can have the Horse Pull start a little later on Sunday afternoon so that church people can get involved.

It was agreed that is fine as long as it is all done by 6 p.m. as the Jr. Fair Board Fun Night will begin that night at 7:00.

Kennedy spoke about the need to replace the bent flagpole now that the tree is down that was next to it, and shared some quotes from the Bryan American Legion.

He said they could probably get some sponsors to cover the expense. It was brought up that some changes to the Shuttle loading zones and drop-offs need to be made and the Board agreed to discuss that further.

In New Business, the board voted to approve the resignation of Ric Henricks and to reschedule the September meeting for September 23 as that will be the week after the fair.

Also approved was the removal of posts along the road north of the bridge by the pond.

The Board held a lengthy discussion about possible uses for the $50,000 which they will receive from the state.

Some suggestions were remodeling of Thaman Dining area and restrooms, grandstand restrooms, computer replacement for Secretary and Ticket offices, combine funds with Livestock Sale account to replace the swine barn roof, foundation on a building that was approved for repair ten years ago, and setting aside the cash needed (around $30,000) for beginning the Fair this year.

It was agreed that it would be wise to do the last suggestion, and then it would be replenished after the fair. Further discussion is needed for how to use the funds.

The Board went into an Executive Session to discuss employment and to talk about Security at the Fair and payment to departments within the Sheriff’s Department. No action was taken.

Rebecca can br reached at publisher@thevillagereporter.com