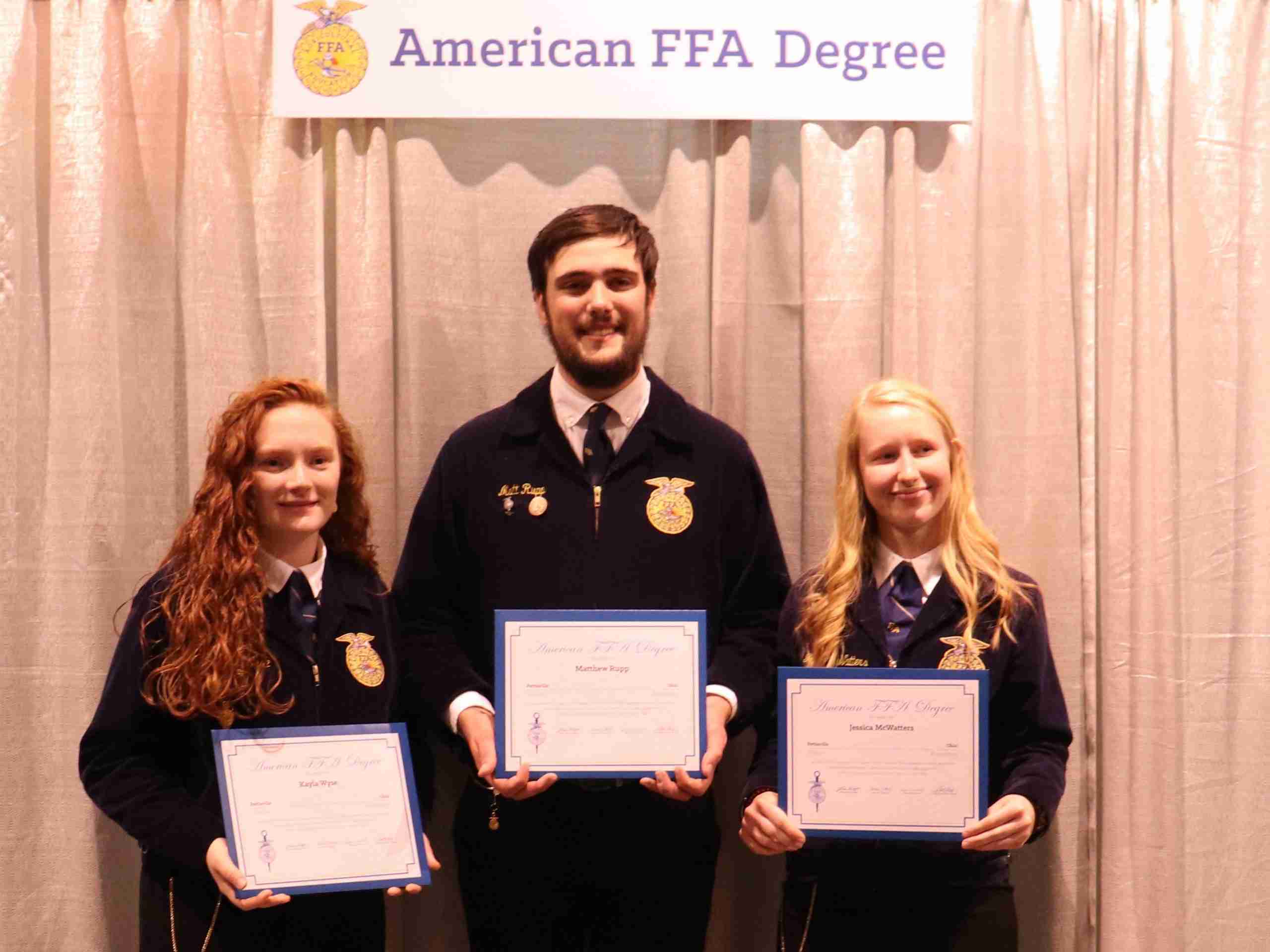 This year, Pettisville FFA had three FFA members receive their American Degrees. The American FFA Degree is the highest degree achievable in the National FFA Organization.

This degree shows an FFA member’s dedication to his or her chapter and state FFA association. It demonstrates the effort FFA members apply toward their Supervised Agricultural Experience (SAE) projects and the leadership abilities and community involvement the member has done.

Qualifications to be eligible to receive the American FFA Degree include: have been an active member, have maintained an outstanding SAE, have earned over $10,000 and invested over $7500 in agriculture or education from their projects, exhibited leadership skills and participated in 50 hours of community service.

Matthew Rupp, son of Scott and Laura Rupp, a 2020 Pettisville graduate was one of the American Degree Recipients.

He served as the Student Advisor and Vice President in the FFA Chapter. Matt’s work experience involved Greenhouse Management, working for area farmers, mowing lawns and working for Brookview Farm Meats and BBQ. The skills he learned in FFA were communication and leadership.

He is majoring in animal science/pre-veterinary medicine at The University of Findlay. Eventually Matt plans to attend veterinary school and become a large animal veterinarian.

Jessica McWatters, daughter of Tom and Angie McWatters, a 2020 graduate of Pettisville was another American Degree Recipient. The honors Jess received in FFA were the Ohio Star in Agriscience, National FFA Agriscience Proficiency Finalist, several CDE awards and she earned a Silver at the National Agriscience Fair.

She was the secretary for the Pettisville FFA from 2018 – 2019 and served as president in 2019 – 2020. Her SAE projects included four agriscience projects, raising 2-5 head of cattle per year and broilers.

The skills she learned in FFA were responsibility, time management, a strong work ethic, confidence, and the value of creating connections in the professional world.

Kayla Wyse, daughter of Gene and Judy Wyse, a 2019 graduate of Pettisville was the third recipient for the American Degree. The honors Kayla received while in FFA were the Star Greenhand and Star Chapter Degree Awards; National Agriscience Fair Winner in Division 3 Plant Systems; National Proficiency Finalist; and an Ohio American Star in Agriscience.

Her offices held in FFA were Secretary and President. Her SAE Projects and work experience involved taking a culmination of four research projects dealing with plant and insect science.

This was completed first at the local level, presented at a state level and proceeded to National competition. Kayla’s skills learned in FFA were leadership and public speaking.

Kayla is currently attending Wilmington University and her future plans are to become a research agronomist while continuing to look for new pest controls after obtaining her Master and Doctorate Degrees.

Kayla also would like to travel to third-world countries and teach sustainable agriculture practices to young people.

Congratulations to these FFA members! Pettisville FFA wishes you the best of luck in your future!