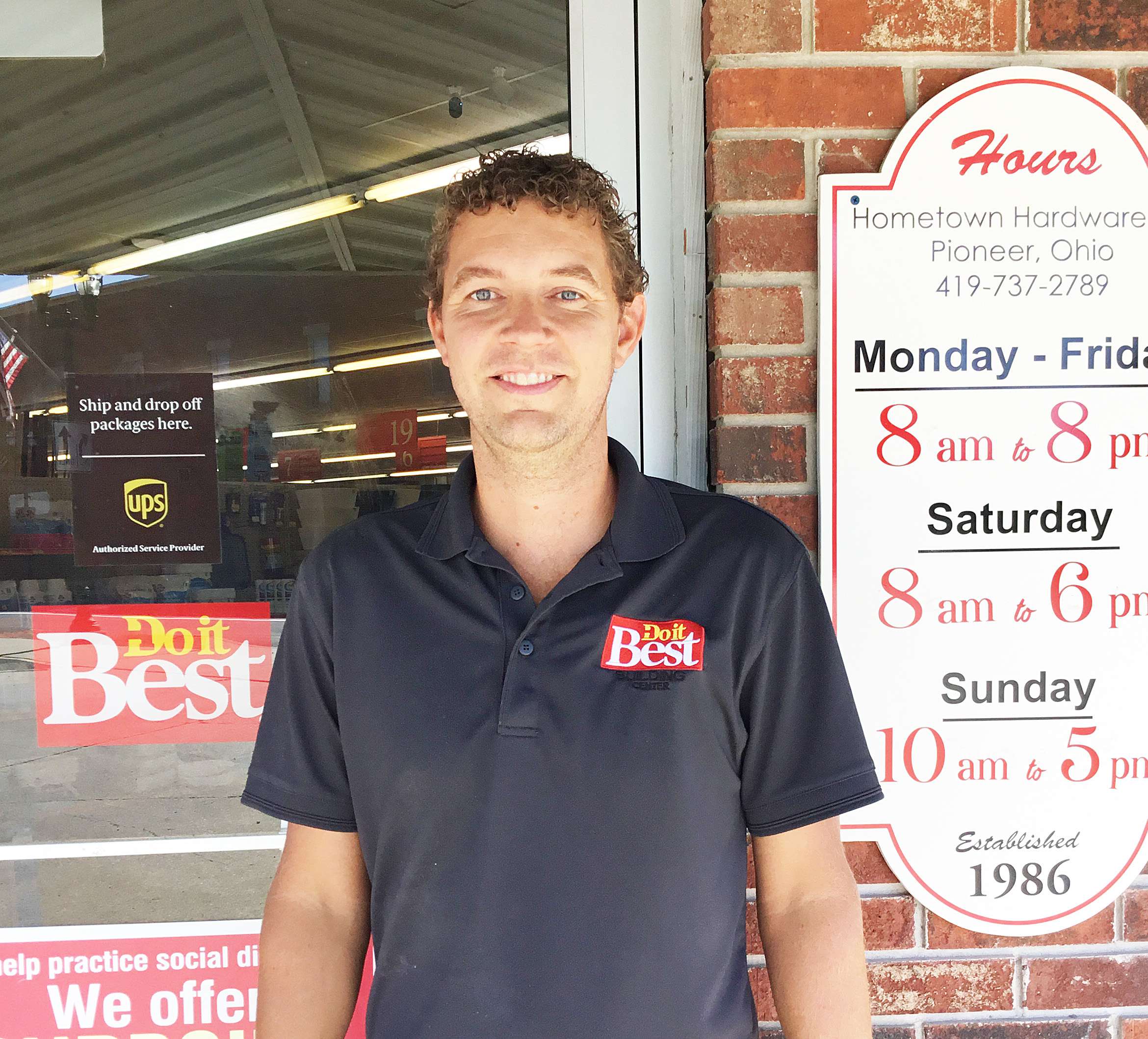 ATTENTION CONTRACTORS AND DIY’S … Will Cable has everything you need for your hardware and lumber needs right in downtown Pioneer, Ohio. Will is happy to announce that they are in the process of renaming Hometown Hardware,” Do It Best Building Center” as he now offers everything needed for repairs and construction, including lumber, and with hours that meet the needs of everyone. (PHOTO BY REBECCA MILLER, STAFF)

Hometown Hardware has been a landmark business in Pioneer, Ohio, since 1986 when Dave Votaw opened the store. Oddly enough, that was the year that the new owner was born.

Will Cable, the ambitious young man who purchased the store in 2016, was nominated during 2022 by Do It Best, the Hardware Co-op to which the store is connected, for Young Retailer of the Year.

“I didn’t win,” Cable said in an interview, “but it certainly was an honor to be nominated. It was the last year I was eligible as it is for retailers who are 35 and under.”

In February of this year, “they came out with a camera crew and interviewed for about five hours, taking lots of pictures, including with customers,” he shared.

The articles they wrote about the nominees were extensive and were used by the judges to determine the winner. In Will’s article, they shared his history, including how he began working in construction part time when he was only 14 years old.

Will has always had a lot of drive and uses it to further not only his personal life, but the life of any business with which he is involved.

Moving into full time construction as an adult, he also worked to get his first responder license and EMT license. before being hired in the EMS field full time.

During the five years that he worked full time in that field, he was promoted to Shift Supervisor and lead a team of forty people, as well as meeting and marrying his wife April, in 2009.

In 2012 they moved to Pioneer to be closer to April’s family, and Will went back into construction by starting Midwest Builders, his own company.

About four years in to running his own business, during a family gathering, his father-in-law, Dave St. John, jokingly asked the family members if anyone wanted to buy a hardware store.

He said he had been talking with Dave Votaw at Hometown Hardware who told him he was thinking about retiring and wanted to sell the store.

St. John may have been joking around but the idea buried itself in Will’s thoughts and the very next day he went to see Votaw.

In their talks about the possible sale, Votaw shared that the store needed updates, but with his hopes to retire, he did not want to invest the time and energy into all the technical and digital updates that he would need to learn.

It seemed the perfect time for a younger person to step into the picture. In the Retailer of the Year interview, Cable said, “I had always thought about going into retail.”

“I also began to think about what I wanted to do for the next 20 or 30 years. Construction is hard on your body. EMS isn’t any better, it’s hard on your back. Plus, I had kids by this time and I wanted to spend more time with them.”

Over the following months, they worked out the details, selling the construction business to his brother-in-law and finalizing the sale of Hometown Hardware in 2016.

The store already had quite a few faithful customers who kept coming, but as Will updated and revitalized the store with more inventory, raising the four-foot displays to 6 feet to accommodate the new inventory, and immediately adding a computerized Point of Sale system, more builders and DIYers began frequenting the store.

He solicited feedback from the customers to find out what products he should carry in order to help them not have the need of driving so far away for those needs to be met. Cable spoke highly of Dave Votaw and how he kept the business going in a small town during the years when the big store changeover hit America.

Walmart, Menards and other large suppliers were touting lower prices and more options, but he was able to keep his business up and running.

“They may have a lot of cheap items,” Cable said, “but since we have become part of Do It Best Hardware, we are able to bring prices down to a level that makes them competitive. Do It Best does research and recommends prices for the retailers.”

During the height of COVID, Will was available to Michigan residents who were unable to purchase paints in their state due to restrictions.

Many drove down to Pioneer during that time as they had extra time for DIY projects at home. His “earlier moves to establish a paint destination paid off in a big way during Covid,” it says in the nomination interview.

Customers can’t say enough good about the service they receive and they continue to return.

One of the changes Cable made when he bought the store was to immediately “rebrand the store as Pioneer Hardware.”  Presently they are in the process of changing the name to “Do It Best Building Center” as he has added lumber and more building supplies.

Area residents and business owners can purchase everything they need right there in Pioneer. The lumber selection includes everything anyone might need – plywood, OSB, and dimensional lumber are all there.

Do It Best owns a mill in Edwardsburg, Michigan, which is only an hour and a half away, so Cable is able to make a quick run to pick up any lumber needed that he might not have in stock for a customer.

Besides the brand-new Lumber area, they also have a large selection of Pet supplies and pet foods, carrying Kalmbach Feeds. He shared that he is happy to hear people saying they think of the store as a one stop.

The store soon to be known as Do It Best Building Center, sells plumbing, electrical, and paint supplies along with all of the regular nuts and bolts of a Hardware company.

Folks can get everything they need except food and clothes. You need it, they have it.

Another change to the store since the changing of the guard includes bringing in approximately 8000 new SKU’s (Stock Keeping Units) as they had added 50% more space to put it, offering customers over 22,000 SKU’s.

With the stock growing, the customer base also grew and transactions rose 6% in 2017, another 7% in 2018 and continues to grow.

The store is now also online with its own website, offers a large selection of paints and continues to do resets that upgrade the look and the availability of products.

Since 2017 Will has gone from four to ten employees, two full time and the rest part time, and is thrilled to have Megan Hunkapiller join the team as Store Manager.

Megan wanted to work closer to home and brings experience from working at Tractor supply in Bryan.

The hours have also been adjusted as they tried a couple different things and have settled with being open on weekdays from 8-8, Saturdays from 8-6 and Sundays from 10-5.

Will feels that this gives everyone a time when they can fit in a run to the hardware store.

Many more changes are coming in the future, besides the name change, with Will Cable constantly learning and growing in his business career.

He shared in the nomination interview that, “For him, “the importance of being a part of the home improvement industry comes down to two words: family involvement.

Even with all the time I’ve spent building this store to where it is now, I’ve still spent more time with my family. I’m not just away on a job site; they can come down to the store and we can be together.””

It’s much more of a family affair than a construction business.  The kids love coming to the store, especially my boys right now.

They’re at the age where they want to help, and they can help. It’s a good experience for all of us, and I’m really proud of them. They really jump in and figure things out.

It’s been neat to watch them learn and get excited about this industry. It’s cool to think about them being in the next generation that runs this store.”

Being a part of rural life is important to Will and April and they enjoy getting to know the people of the area through their business.

“One of the things we discussed and prayed about,” Will said, “was being involved in the community. When all the openings came up on the Village Council, we thought this might be an opportunity to get involved.”

Will ran for Pioneer Village council in 2019 and was elected for a four-year term. Over the years, buying locally has been important to the village of Pioneer and they continue to make many purchases at the Hardware Store.

With Will on the council, they separate that bill from the others during the vote to pay the bills each month, to keep it “legally clean.”

The experience of being on council has been good so far, Cable shared, adding that there is lot more to running a village than you think. He also sits on the Board of the Pioneer Chamber of Commerce.

Will and April and their four children, two girls and two boys, attend Lakeview Church just north of Pioneer in Michigan, and the children are involved in sports at North Central Schools.

They are moving into their second year of homeschooling the children and are staying very involved with neighbors, friends and family.

Buying the Hardware store was a great decision and is benefitting not only the Cable family, but the entire community.

In a quote from their pastor, Rev. Steve Smith, in the nomination article, Smith said, “Will has a strong desire to provide the best products at the best prices to keep customers and attract more business within the community.

Adding lumber, drywall, and a variety of other building supplies … is a wonderful improvement for the community and the local contractors.”

With all that he has accomplished, it is no surprise that Will Cable was nominated for Young Retailer of the Year.