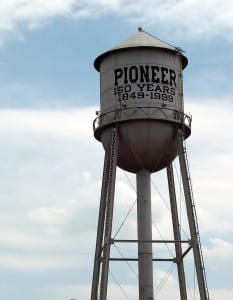 Pioneer’s old water tower is a familiar landmark in the village.

Pioneer residents will be saying good-bye to a familiar landmark in the future. After consideration of the costs of painting and repairing the old water tower, located behind the police department and fire department, were considered, it was found that the demolition of the structure would be more cost effective. Members of the council voted with regret to move ahead to approve a bid for demolition. Richard Schmucker, who had hoped to see it saved, cast the only “nay” vote.

Police Chief Tim Livengood presented his report. In the month of May, there were 144 calls for service. Of those, 48 were dispatched, and 75 were officer initiated. The southeast zone of the village remains the busiest with 62 calls in May. Now that summer months have arrived, the busiest day of the week for calls has changed from Sunday to Friday, which saw 25 calls for service in May. The average response time for a call is one minute, thirty seconds.

Fire Chief Denny Fackler said that his department had 27 runs from May 13, 2013, to June 17, 2013. They also followed up on 11 controlled burns. He added that the Boys Scouts were starting their merit badge program this coming Friday, and that program will continue for eight weeks. The department has put an impressive number of scouts through this program over the last twelve years. It was estimated that between 2500 to 3000 scouts had been through the program.

Norm Thorp and his daughter Tracie were at the meeting to discuss his concerns with the Green Belt around portions of Lake Pioneer.

Shelley Davis who is representing the German Fest Committee asked for clarification of funding for the event. She was told that any public money expended for the event would have to go through the village clerk’s office. Ms. Davis also asked about insurance coverage for the event, as she wanted to know if it was insured under the town’s blanket insurance policy. She was encouraged to talk to Beck Insurance. Village Administrator Al Fiser strongly encouraged the committee to get separate insurance, but said that he would find out if it is covered under the village policy. Davis said that at present, plans include a German Polka band the Friday of the event from 7-11 p.m., and that there will be a parade on Saturday. There will be a chicken barbecue, and the committee is planning on family games.

Fiser said that CDBG (Community Development Block Grant) funding for the parking lo adjacent to the American Legion property was not approved. The Legion is still committed to the project, and the village could apply for funding again next year.

The village has hired temporary summer workers for maintenance work in the parks. They are also working on landscaping and mowing the cemetery.

Mayor Ed Kidston said that he was recently approached by a group of children I town about getting the basketball court in the park repaired. They were circulating a petition for this purpose. Kidston told them that they wouldn’t need to have a petition, but that he would look into the matter. He checked out the basketball court and found that it is indeed in dire need of repairs. The tennis court and basketball court were built in the 1970s and both need work. Kidston was impressed at how organized the young people were, and that they were ready to take action. The council discussed plans to look into making repairs, but they may not be able to complete this before the end of the summer. If not, then this may be a project for next year. Fiser will look into quotes and prices. Kidston said that the cost to resurface the entire court would be around $8000, and that the baskets would need replaced, and fencing would need to be repaired as well.  Fiser said that he would look at the budget and see what we could do. Kidston said that he would like to see work done as soon as possible.

Fiser also told of recent repairs to the town’s electrical truck. The boom and fiberglass were on the verge of being unsafe. The town has been doing a lot of tree cutting and tree trimming, and this has taken a toll on the equipment. Repairs were made at a cost of $11,000, and Fiser said it “looks new and is ready to use, and is in good shape.” He thanked the Village of Montpelier’ Electric Department for loaning the use of a back-up truck while repairs were being made to the town’s truck.

The substation improvements have been made. Back-up switches were installed. They are now in excellent shape. Repairs were made at a cost of $17,900.

There were three bids for demolition of the old water tower. Estimated costs to paint and repair the structure were $21,000, which exceeded the lowest bid for demolition. The bids were as follows: Kessler Tank out of Fremont, Ohio – $27,000; Gateway Tank – $22,500; and Rural Water Storage, LLC out of Camden, Ohio – $19,000. All three bidders included the cost of taking the steel from the tower. Council voted to accept the lowest bid from Rural Water Storage. There are WiFi antennas atop the old tower, and these will be moved to the new water tower prior to demolition. Mayor Kidston said that he would like professional photos to be taken of the old water tower, as it was a beloved landmark in the village.

Village clerk April McMillen recently attended a conference. She received a $485 scholarship to cover the cost.

Council member Connie Salisbury said that she had heard from a lot of residents about how nice the alternating state and American flags on the light poles look. They have  been very well received. She also asked about whether or not her church would need permission to hand out invitations to her church when they hand out gift bags at the parade. Mayor Kidston said that he felt this was covered under the right to free speech.  Richard Schmucker expressed concern about the large number of decorations at the cemetery. He has been helping with mowing, and said that some of the decorations make it difficult to mow as they block access. Also discussed was the topic of engine brakes within the village, formerly known as “jake” brakes. Some residents have complained about the noise. The village will check to see if there is already an ordinance governing the use of the brakes within the village, and if not, then council would have to pass a resolution before anything can be done.

Kidston said that he had been hearing compliments on the work that village crews have been doing around town, and that they are keeping the town in good shape.

Council voted and approved Ordinance 05-2013, an ordinance amending the appropriations for 2013, and declaring an emergency. Resolution 03-2013 was passed, a resolution accepting the amounts and rates as determined by the budget commission and authorizing the necessary tax levies and certifying them to the county auditor.

Council voted to change the meeting dates for July and September. The July meeting will be held on Tuesday, July 16 at 7:00 p.m. The September meeting has been changed to Tuesday, September 17 at 7:00 p.m.

The council went into an executive session to discuss possible property acquisition, and took no action. The meeting was adjourned following their return to open session.