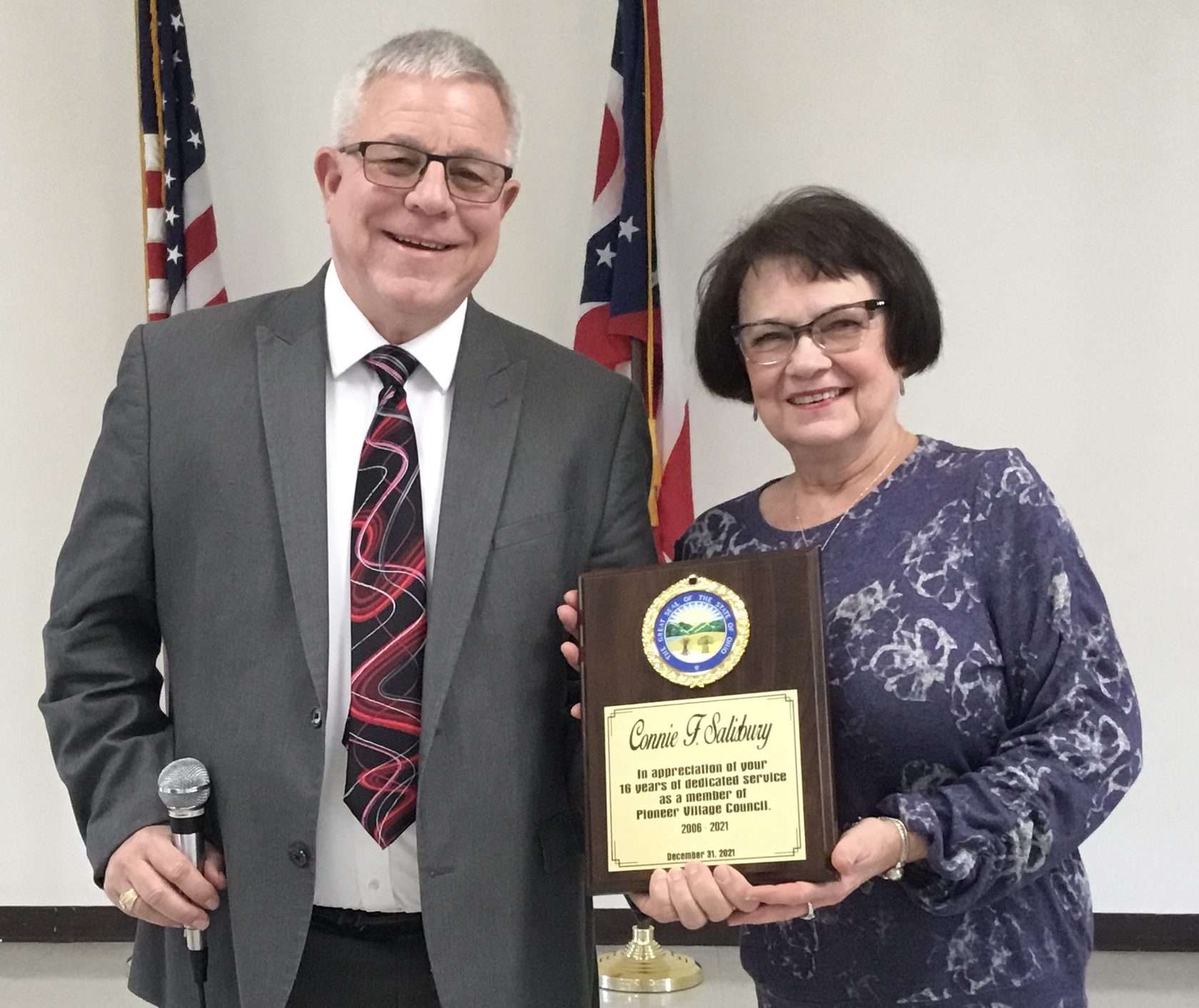 WOMAN OF THE HOUR … During the December 13, 2021 Pioneer Seniors Christmas dinner, Mayor Ed Kidston gave Council member Connie Salisbury, who has been on the village council for sixteen years, a plaque and choked up when he stated that she will be very missed. (PHOTOS BY REBECCA MILLER, STAFF)

This annual gathering of the seniors for a Christmas dinner has been orchestrated by Connie Salisbury for the past fifteen years. Mrs. Salisbury has held a seat on the Pioneer Village Council for sixteen years and remembers helping to get ready for it her very first year and then taking over the next year.

She said she enjoys organizing it and appreciates all the help from others – the Seniors at the center set up and decorate for the gathering, the village purchases gift cards from the Pioneer businesses to give away, and this year the servers were from the North Central FFA.

The meal was catered by Sooz, a business right on the corner by the center of town street light. Bruce and Sue Taylor, the owners of Sooz, prepared and served up the food at the dinner. Seniors and other guests were treated to a full turkey dinner with desert, along with drinks lovingly served by the FFA girls and their teacher.

Mayor Ed Kidston was the emcee for the event, welcoming everyone, calling the names for the gift card raffle tickets (which were delivered by Dakota and Parker – sons of council member will Cable), updating the attendees on what is happening in the village and awarding a Plaque to a very special person.

Pastor Steve Smith prayed before the meal at the beginning and even led the group in singing Rudolph the Rednose Reindeer at the end of the event, at the prodding of Mayor Kidston.

There were 70 who had signed up to come but around 50 were there, allowing every senior citizen to receive one of the many envelopes on the tree.

Each envelope held a gift card for one of the Pioneer businesses and at first numbers were called for winners. At the end of the event, Mrs. Salisbury took the rest down from the tree and every senior there went home with a gift card.

The mayor commended the FFA members for their volunteer service, saying that the North Central FFA is one of the things at the top of the list of great things about Pioneer.

He also read the Memorial List of all the Pioneer residents who have passed away in the past two years, as there was no reading done last year. There was silence as he read the names, with a head nodding here and there as those present remembered someone they had known.

There were a number of Village leaders present, including Councilman Will Cable, NC High School principal Dr. Marcia Rozevink and school treasurer Eric Smeltzer, Police Chief Tim Livengood, and others.

A highlight occurred when Mayor Ed Kidston spoke from his heart about Connie Salisbury saying that she has been a wonderful benefit to the village by being on council for the past 16 years. She is stepping away from being a council member and he said he hopes she will run again in the future as she was one of the best ever.

He then presented her with a plaque “In appreciation of your 16 years of dedicated service as a member of Pioneer Village Council from 2006 to 2021”.

Mrs. Salisbury read the history of Rudolph the Rednose Reindeer and brought lots of smiles to the faces of the full and satisfied guests.

The mayor also informed everyone that there will be some changes in the new year, some that will be hard to deal with for a while but will bring great results.

There will be major construction taking place on St. Rt. 15 and he pointed out some information all will need to know: the stores on the main road through town will remain open; residents on that street will need to get their mail at the post office for a few months; the Utility Bill Box will be moved to the Senior Center Parking lot; driveways will be kept accessible. 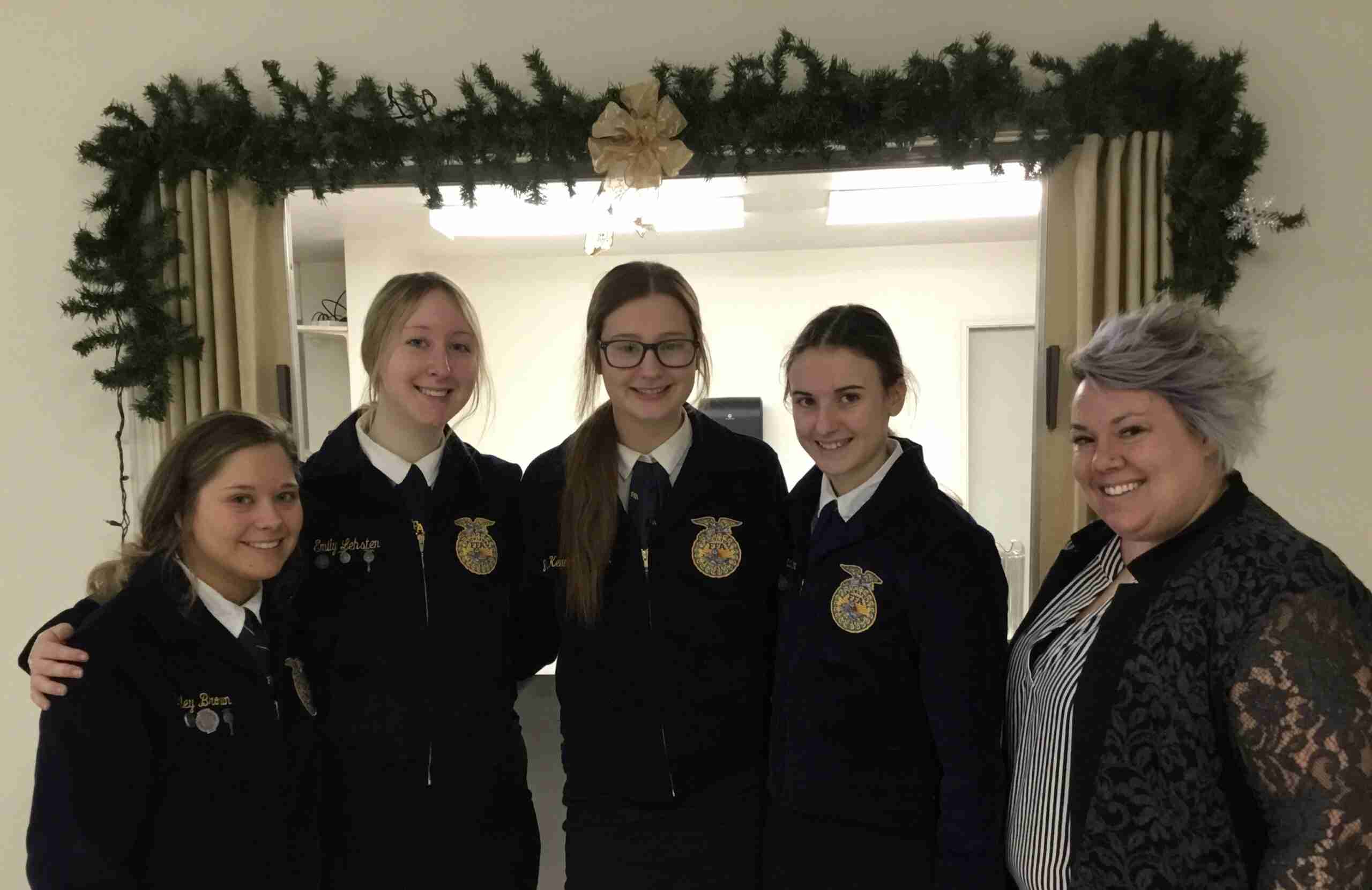 He encouraged anyone who lives where the construction is happening to call the Village office if they run into any issues, such as their garbage not being taken or their driveway being blocked and they will take care of it immediately.

In other news he reported that the businesses are doing great and bringing new jobs to the village. The major investment being made by Aqua Bounty to Pioneer of $350 million dollars is going to benefit the school and the residents as the years go by.

“As we grow, we always want it to benefit the residents,” he said, adding “a secret” that he hopes to be able to bring down the cost of electricity for the residents as the money starts pouring in from the large companies.

Senior Center Site Director Shanna McKelvey enjoyed the day right along with the seniors, welcoming everyone at the door at the beginning and partaking of the meal with the other guests.

A big thank you was given to all those who participated in making this event a lovely success.