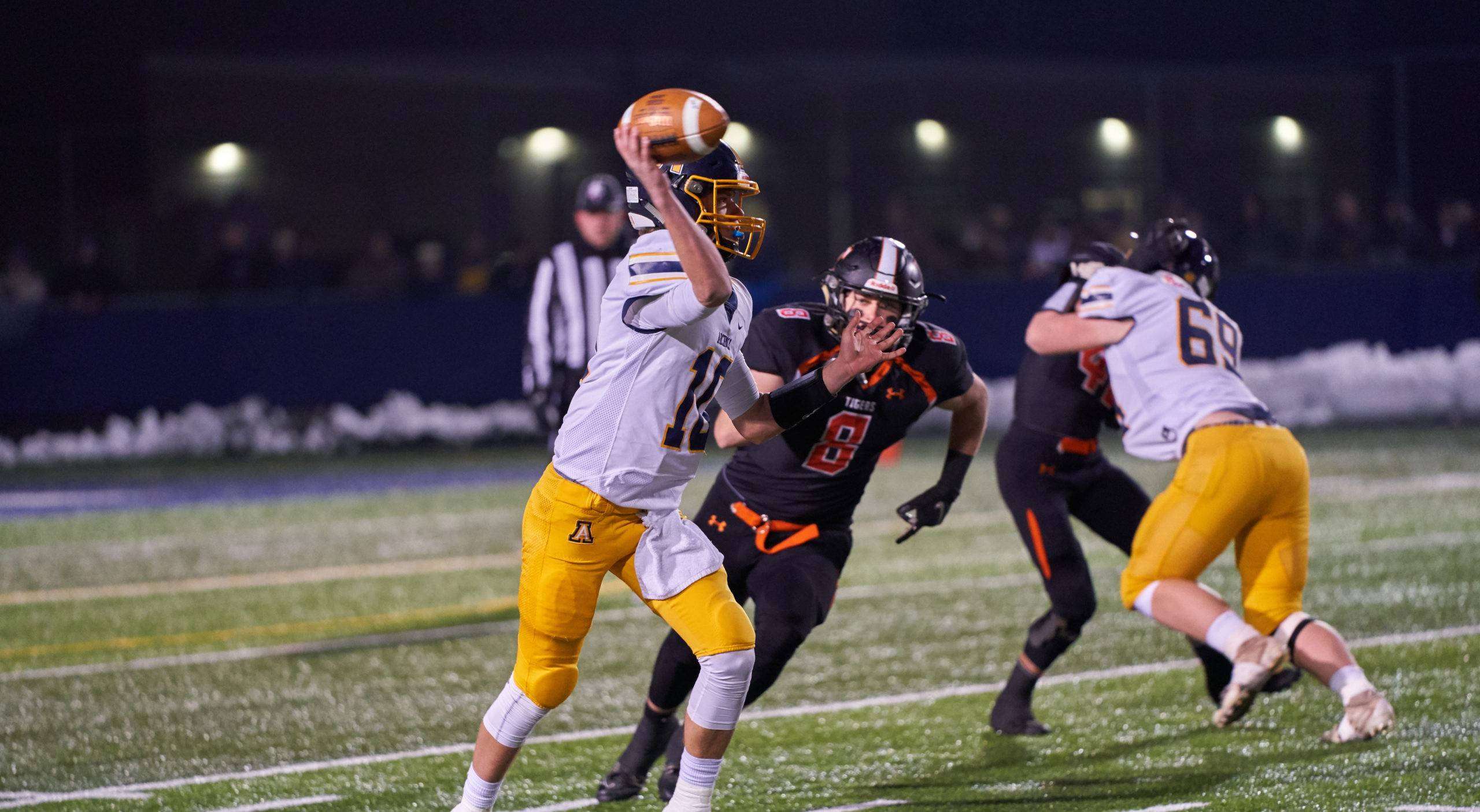 NAPOLEON-In Archbold’s regional quarterfinal win, it was their offense that provided the last second heroics to pull out the win. Last week against Liberty Center in the regional semifinals it was the defense that saved the day as the Bluestreaks snuck by the Tigers 31-30 at Buckenmeyer Stadium in Napoleon last Friday night.

After a high scoring first half the defenses settled in and would control things in the third quarter to keep the game deadlocked at 21-21 entering the final stanza.

On the ensuing possession for Archbold, quarterback DJ Newman found Brandon Taylor down the sideline for a 50-yard touchdown pass on a fourth down play to give the Bluestreaks the lead at 28-24 with 8:18 to go.

Liberty Center fumbled on the first play of their next possession on a bad exchange between the quarterback and running back and Adrian Juarez recovered for the Bluestreaks to give them the ball at the Tigers 10-yard line. Archbold was unable to move the ball though and they settled for a 23-yard field goal by Devin Witte to extend their lead to 31-24 with 6:40 left in the contest.

The Tigers, who defeated Archbold 39-36 in the regular season meeting between the two teams, mounted a threat as they drove to the Archbold 30-yard line but were stopped on downs to give the ball back to the Bluestreaks.

The Tigers would get the ball back at their own 18-yard line with 2:15 to go in the game after forcing a Bluestreak punt. The Tigers quickly marched down the field behind the passing of quarterback Cam Krugh who would hit Conner Keller for a 25-yard score with 33.1 seconds to go in the game to end the nine play drive and bring the Tigers to within one at 31-30.

Liberty Center head coach Casey Mohler then rolled the dice by going two points and the win but the pass by wide receiver Aaron Schafer on a reverse was off the mark to keep Archbold in front 31-30. The Tigers then attempted an onside kick that was recovered by Archbold’s Noah Gomez to secure the win.

Early on it appeared that the offense with the ball last would get the win as both offenses moved the ball at will. Liberty Center opened the scoring with a nine play 69-yard drive, that included a successful fake punt at midfield, when Zach Bowers scampered 22 yards for a touchdown to make it 7-0 Tigers.

Archbold answered back before the end of the first quarter with a nine play drive of their own capped off by a 22-yard touchdown pass by Newman to Antonio Cruz to tie the game 7-7 with 10.9 to go in the quarter.

Then it was the Tigers turn as Krugh tossed a nine-yard scoring passing to Trent Murdock to complete a 74 yard drive and give Liberty Center the lead back at 14-7 with 8:43 remaining in the half.

Archbold then went to running game on their next drive as Noah Gomez had a 37-yard run to set up his one-yard scoring run just two plays later to tie the score at 14-14 with 6:38 mark.

The Tigers quickly responded with their ground attack as they covered 65 yards in eight plays, seven of them running plays, capped off by a three-yard run by Max Phillips to put Liberty Center back in front 21-14.

The next Bluestreak possession found them knocking on the door again but the Tigers defense forced a turnover as Shafer picked off Newman in the endzone with 1:07 left.

The Archbold defense would then force the first Liberty Center (10-2) turnover of the night as they recovered a Tiger fumble on the next play to give their offense the ball back at the Tiger 29-yard line.

Five plays later Newman went to Elijah Zimmerman in the end zone, on a play reminiscent to their game winning connection a week earlier, for an 18-yard touchdown to tie the game at 21-21 with just 3.6 seconds left in the first half.

Newman ended the night for Archbold 19/27 passing for 195 yards with three touchdowns and two interceptions while Gomez led the running game with 108 yards on 15 carries and a touchdown. Cruz hauled in eight receptions for 61 yards and a score while Taylor had six catches for 86 yards and a touchdown.

Liberty Center, who outgained the Bluestreaks 430-342, were topped by Bowers with 138 yards rushing and Krugh was 15/21 for 217 yards and two touchdowns.

UP NEXT: Archbold (11-1) will take on the top ranked team in Division VI the Anna Rockets (11-1) in the Regional Finals on Friday night at Lima Senior’s Spartan Stadium with kickoff set for 7pm.