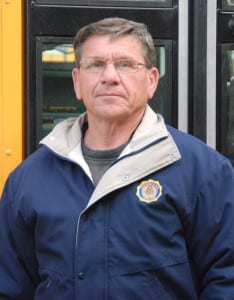 After 28 years driving a school bus for Stryker Schools, Robert Davis will be retiring from his seat on Bus 6 at the end of the 2013-14 school year. Mr. Davis began his driving career when his own children were in junior high. He explains that “I figured if I was going to drive to all of the sporting events anyway that I might as well drive there.” With different laws in effect at the time, Mr. Davis was hired immediately upon his inquiry and completion of his Chauffeur’s License. Since that time he has stayed current with driving regulations that have included the move from having a Chauffeur’s License to needing a CDL to drive the bus. During that time, Mr. Davis has also moved from an occasional part time driver to a full time driver.

Mr. Davis looks forward to spending time with his wife Sally as well as their children, Larry and Tracy, as well as their four grand children and four great-great grandchildren after retirement but notes that he’s really not quite ready to sit still yet and would like to travel as well as possibly drive on a more limited schedule in the future.

Mr. Davis does also note that he’s going to miss the kids that he drove to and from school as well as to field trips and extra-curricular activities every day. Having one of the few positions in a school system that allows interaction with the same students all the way through their school careers, Mr. Davis expresses that he has enjoyed this time with the students and has loved to watch as the kids have grown and change over the years.