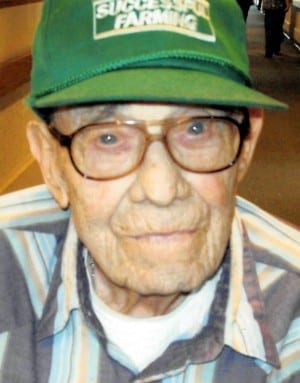 Russell Earl Dunseth, 94, of Montpelier passed away on Sunday February 28, 2016 at Hillside Country Living in rural Bryan. He was born on June 21, 1921 in Mitchell, South Dakota to Sylvester A. and Minnie (Yates) Dunseth. Russell graduated from Metea High School in Metea, Indiana in 1940. He attended both Defiance College and Indiana University. He proudly served his country in the United States Army Air Corps during WWII. After his service in the war, Russell married Betty J. Durham on May 30, 1947 in Williams Center, Ohio and she preceded him in death in January of 2012.

Visitation for Russell will be held on Friday March 4, 2016 from 2-7 pm at Thompson Geesey Funeral Home, Empire Street Chapel, 335 Empire Street in Montpelier. A funeral service will take place on Saturday March 5, 2016 at 11 am at the funeral home with Pastor Brad Faler to officiate. Interment will follow at Ney Cemetery in Ney, Ohio, with military rites being presented by the Bryan V.F.W. Post #2489.

Memorial contributions may be made in Russell’s memory to the Bryan V.F.W. or the Williams County Coon Hunters. Online condolences may be left for the family at www.thethompsonfuneralhome.com.