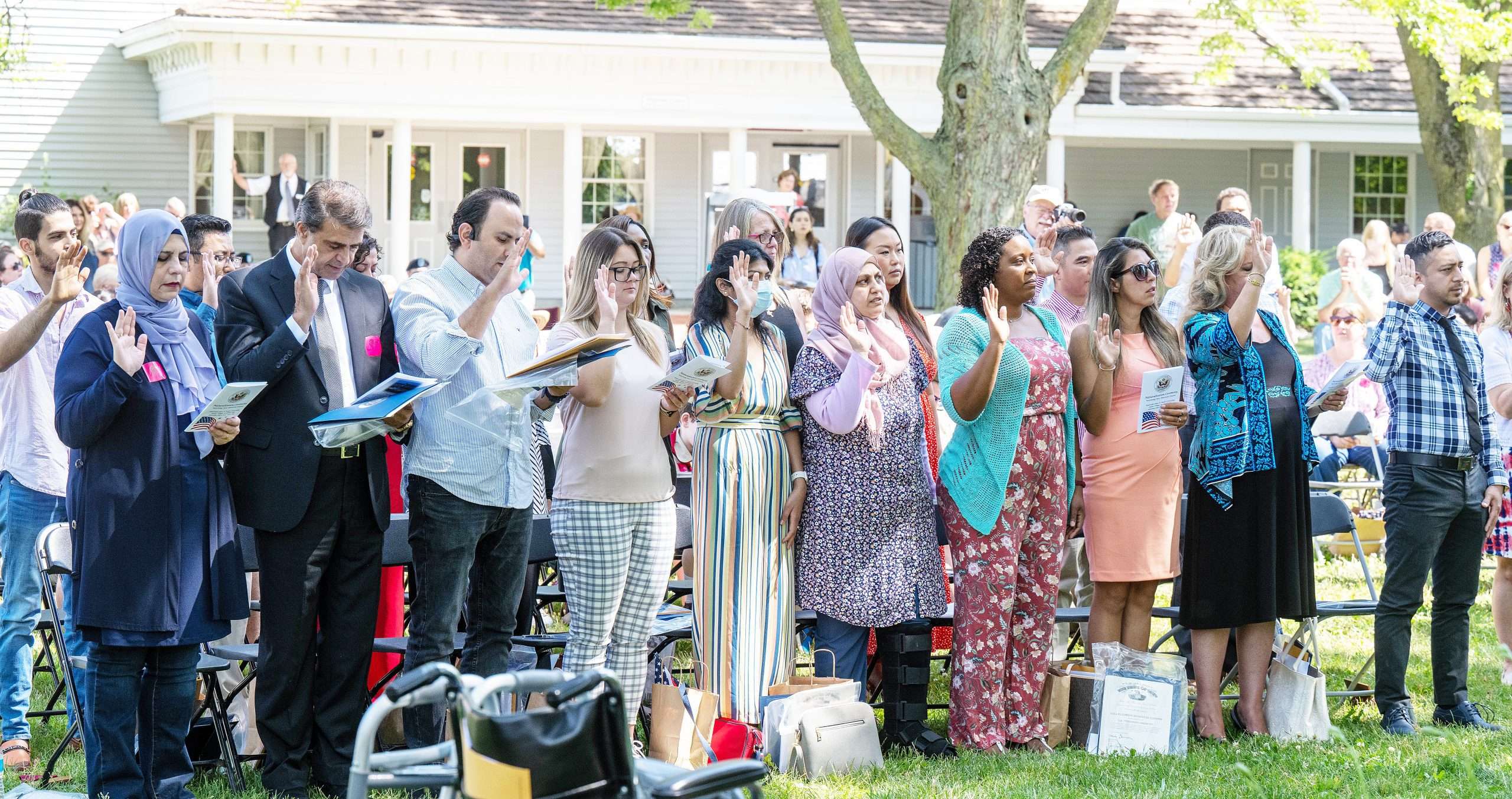 OATH … New US Citizens take the Oath of Citizenship during the Naturalization Ceremony at Sauder Village in Archbold. (PHOTOS BY JACOB KESSLER, STAFF)

Sauder Village in Archbold hosted a Naturalization Ceremony for new citizens on Saturday, July 2nd. The ceremony took place at 11:00 a.m. on the Village Green just outside the welcome center.

This ceremony is the final step in the process each person must go through in order to obtain their citizenship with the United States.

During the ceremony, new citizens must take the Oath of Allegiance. This ceremony at Sauder Village also included special music performed live by the Fort Defiance Dixieland Jaxx Band.

To start the ceremony the Fulton County Honor Guard posted the colors before Town Crier Steve Van Sickle called the court to order.

Sauder Village CEO Debbie David then welcomed everyone who was in attendance before the Honorable Judge James R. Knepp II spoke.

Judge Knepp explained that since Fulton County Common Pleas Court Judge Jeffrey L. Robinson was retiring at the end of this year, he was going to give him the honor of administering the oath.

Judge Robinson then administered the Oath of Allegiance to each of the thirty-nine new United States Citizens. Judge Robinson also gave remarks for those who were obtaining their citizenship.

“The land of opportunity, the land of freedom, the land so many people have fought so hard for to keep those privileges. You remind us of how important those things are. You are an example of why, despite the many differences that we have in this country, we should all be proud.”

“I am happy to be the first to welcome you as new citizens. I hope that you all do well, that you prosper and that you enjoy great happiness. God bless you; God bless the United States of America.”

The Boy Scout Troop #63 then lead everyone in the Pledge of Allegiance before the Fort Defiance Dixieland Jazz Band played the National Anthem.

Next, Steven Van Sickle read The New Colossus, which is a sonnet that stands as a symbolic way of welcoming immigrants. Remarks were then heard from Judge James R. Knepp II.

Each of the new citizens were then presented with certificates before the Fort Defiance band played God Bless America.

The ceremony was then closed by Crier Steven Van Sickle. Following the ceremony Judge Knepp II and Judge Robinson stated the following to The Village Reporter.

“I’ve never done one of these without a lump in my throat and a tear in my eye. Just to look in the faces of people who have put everything on the line and gone all in, and at least figuratively signed the Declaration of Independence, that affects me and I’m glad it does,” said Judge Knepp II.

Judge Robinson continued with, “I didn’t know what to expect. Judge Knepp told me that it was going to be emotional and I’m going to tell you I was doing great until I got to about the last line. I got the biggest lump in my throat. That was exactly the perfect expression.” 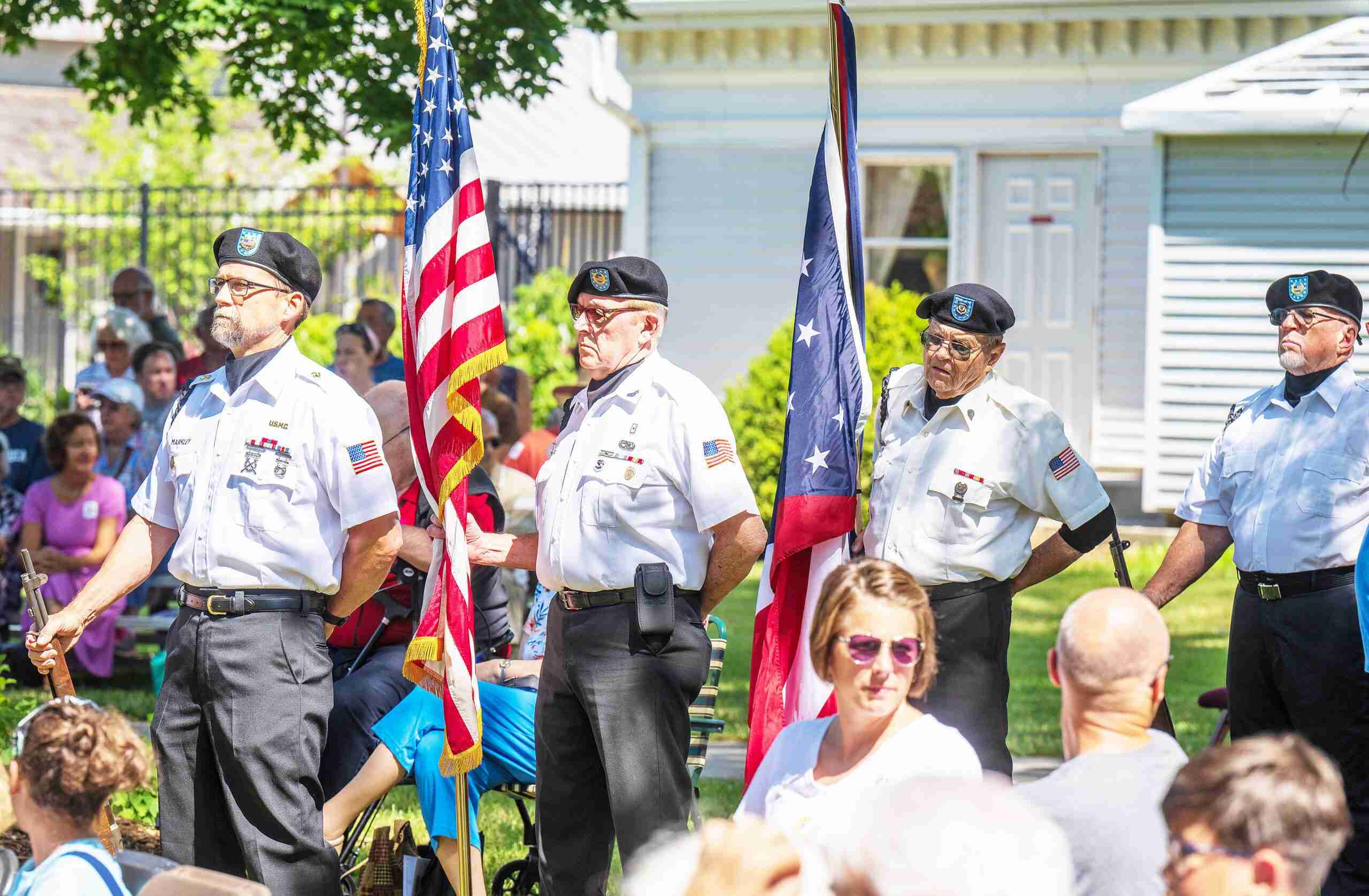 “I wasn’t sure I was going to be able to spit out the words to get to the end. There’s a real feeling of pride that goes with this and I can’t explain it.”

“What I said in my statement was true, I was really trying to think of something that would be kind of cool and memorable and all of a sudden it occurred to me how much these people had sacrificed to get just what I was born with, and how much all of us as citizens really take that for granted.”

Some of the new citizens were also asked by The Village Reporter how they felt following the ceremony.

Here are some of their responses. “I am very excited. The feeling, I cannot express that. You can express a feeling if you have some experience before, but I never had any experience like that,” said Mohcen Shahbaz.

“I feel blessed, it’s a dream come true. America gave me husband; America gave me the education that I wanted, and I became a nurse and I’m starting my job. There’s just a lot of things to be thankful for.”

“During the Pledge of Allegiance, I started to cry, I am very emotional, but very happy. Not just because this journey of becoming a citizen is over, but because I am super proud of becoming a US Citizen and I take pride in it,” said Mila Homan.

“I am very excited, and very happy. It’s a dream come true,” said Yolanda Fonseca Sosa. She continued on to explain that she plans for continue her education and work to provide for her family. Each one of the new citizens who obtained their citizenship are as follows.

Each of these individuals worked hard to complete a process that many people in the world would like to have the opportunity to try for. Congratulations to each of you for your accomplishment.