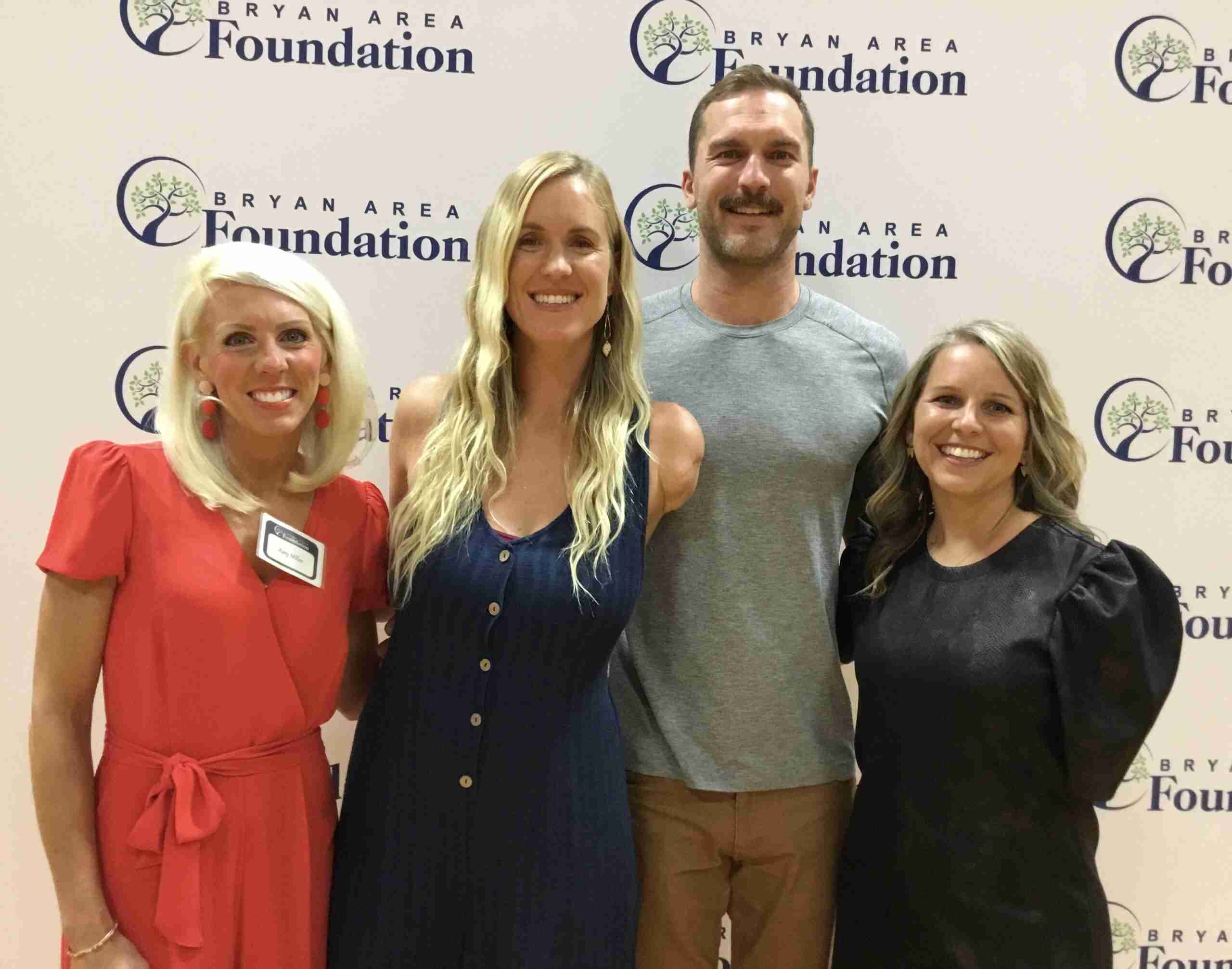 UNSTOPPABLE … Bryan Area Foundation CEO Amy Miller, inspirational speaker Bethany Hamilton, her husband Adam Dirks and October 19, 2021 Emcee Amy Remer took a moment to pause for a picture together after the event held at the Bryan Arts and Education Center. Adam and Bethany have been married since 2013 and have three sons who travel with them. (PHOTO BY REBECCA MILLER, STAFF)

Ever since 13 year old Bethany Hamilton had her arm, and a piece of her surf board, bitten off by a shark in the waters of Hawaii, she has chosen to keep loving life and being positive just like she was before that traumatic experience.

All grown up now and a wife and mother of three, Bethany has become known as “One of the biggest comeback stories of our era.”

She was back out in the waves on a surfboard just one month after the incident and has never stopped. At the age of 17 she began to surf professionally and is still an active surf competitor.

In 2016 she beat a six-time world champion and the top ranked surfer in the world at a major WSL (World Surf League) competition, and in 2017 was inducted into the Surfer’s Hall of Fame.

Bethany travels the world as an inspirational/motivational speaker. She co-authored her autobiography called Soul Surfer: A True Story of Faith, Family, and Fighting to Get Back on the Board, which was then made into a full length movie in 2011, staring Helen Hunt and Dennis Quaid as Bethany’s parents, and AnnaSophia Robb in Bethany’s part.

Thanks to the Bryan Area Foundation (BAF), and generous donations from Altenloh, Brinck and Co. Inc. and Community Hospital and Wellness Center (CHWC), Bethany was in Bryan, Ohio on October 19, 2021.

She came to share her story and inspire the students at Bryan City Schools during the day, and to speak to a packed out auditorium at the Bryan Arts and Education Center that evening.

Amy Miller, President and CEO of the BAF, welcomed everyone to the evening event and shared how some special things happened to bring it all together.

Over the weeks of getting ready for the event, Ms. Miller said she kept trying to figure out who was supposed to be the Emcee but keep feeling like she should not ask the people she thought of for that spot.

Then one day the foundation got a phone call from a lady in Swanton who said she thought she was the person who was supposed to introduce Bethany Hamilton. So Amy Remer, from Swanton had the pleasure of introducing Bethany Hamilton.

She shared how Bethany had impacted her life since she had an amputation of her left arm last September. Mrs. Remer had battled cancer for three years and after having her arm amputated, she was inspired by Bethany’s story.

“I knew if she could do it, I could do it. Bethany has never let her limb loss hold her back from doing anything that she wanted to.”

About a week after the amputation, Amy got a care package from Bethany’s Foundation, the “Beautifully Flawed” Foundation. It had her book, encouraging items and tools that helped her start life with one arm, such as a phone holder that lets her use her phone with only one hand.

Amy Remer and Bethany spent a little time together during her day in Bryan and Amy was thrilled to introduce her.

Following a short video on Bethany to give the audience an idea of her talent as a surfer and her unstoppable character, Bethany Hamilton stepped onto the stage with a gentle smile, to the excited welcoming applause of the audience. “Aloha! What an honor to be here!” She said.

Bethany held the audience attention with no difficulty, speaking with a joy and peace in her voice that drew everyone in. She shared about some of the incredible opportunities she has had as a surfer and the famous waves she has gotten to ride.

Other short videos were shown throughout the presentation to share specific moments of her life as well as encouragement from others.

The base of her talk was the word ADAPT. She shared some wise words of encouragement with an acronym of that word, which she called some tools that can help.

She impressed upon her listeners that it does not matter what happens to you in your life if you choose to “get back up and face the waves again.” The five words she used from the word ADAPT were Appreciation, Direction, Associates, Perseverance and Teachable.

Beginning with the importance of Appreciation in our lives, Bethany said one of the best ways to appreciate life is to “Be Present” in each moment. Appreciate the people in your life, the facts of what did Not happen to you (for her she focused on the fact that she was still alive), and make the most of each day. Let those things help you accept the hard situations.

D in Adapt is for Direction, and Bethany shared how important it is to not just let each day happen to you, but to take steps that propel you forward. Reach toward goals, set boundaries that protect what we are reaching for, and take baby steps every day.

She shared that her faith in God and her desire to live out His Word helped her to set boundaries as a teenager. Now those boundaries protect her marriage and her relationships with her children. When hard times hit, you will be ready to face it when you are on track with direction.

A is for Associates and she spoke about being blessed with people that bring out the best in her. She encouraged everyone to have people around them that are encouraging, loving and can be the glue to help you stand firm in what you know.

She said that her people helped her to stand in her faith during the challenges. Go for a walk, go out for coffee, cheer them on as they cheer you on. She said she believes that her success in surfing has been because she has had strong standards.

A story of another surfer who fell into drugs and “disappeared” from the surfing world was one thing that woke her up to the importance of choosing your associations. Keep the most important things in life, safe.

P is for Perseverance. “You have to persevere. Life is hard to accept sometimes, like waves washing over you and you have to be able to persevere,” she said.

She shared a short video of Nic Vujcic, the Australian/American with no arms or legs since birth who is an inspirational speaker, when she interviewed him years ago and he said to re-frame things into something positive when you “hit a wall.”

She commented on his statement of viewing obstacles as opportunities and how that can help us if we have already decided to do that before something bad happens.

Decide to push through no matter what. “Get back on your board and try!” “Find your way to love first, she said, put people first and be a loving person.”

T is for Teachable and she shared how ever since she was young she sought out people to push her and challenge her. The ocean is not gentle and she has continually gotten coaches and is still learning about things she does not know anything about.

Overcome and be teachable. When you feel stuck, find someone who can help you learn and get past it.

She challenged everyone to ADAPT! Meet the world head on. “What would have happened if I didn’t adapt? I chose to get back on my board. It was not easy, but there are amazing times to be had and I had to face my fears and give it a shot.”

Her competitions began and two summers after she lost her arm she won a National title. On One Day since she became a professional, she took down two world champs and “as fun as that is to have success in my sport, it is more fun to see the ripple effect of putting myself out there” through her book, the feature movie and now a Foundation which she and her husband have started.

“Beautifully Flawed” does retreats for women who have “limb difference” to help them to know God and to have fun and “give them a boost to get out in the world and rock it.”

“So much beauty and good can come from us getting out there and letting people see us make it through hard things. We can all make a difference in this world. I challenge you to overcome and to get back on the board.”

Following the talk by Bethany, Amy Remer joined her on stage and they had a short question and answer time, with Bethany and Amy relating to each other as amputees and as moms.

Bethany released a documentary in 2018 called “Bethany Hamilton…Unstoppable” which can be seen on Netflix. Her quote “I didn’t need easy, I just needed possible” has become quite famous.

She quoted a verse from the book of John in the Bible, saying that “everyone WILL have trouble so we need to be mentally prepared for it and then Adapt. Know who you are and your identity.”

Amy Miller thanked everyone for coming and invited anyone who would like to get their picture taken with Bethany, to line up afterwards and the Golden Bear Photographer Nathan Keel took pictures.

What a great experience for anyone who got to go on Tuesday evening…to hear this young woman who has overcome so much and is using it to encourage everyone else to be Unstoppable.