STRYKER BOARD OF EDUCATION: Stryker BOE Holds First Meeting Of The New Year 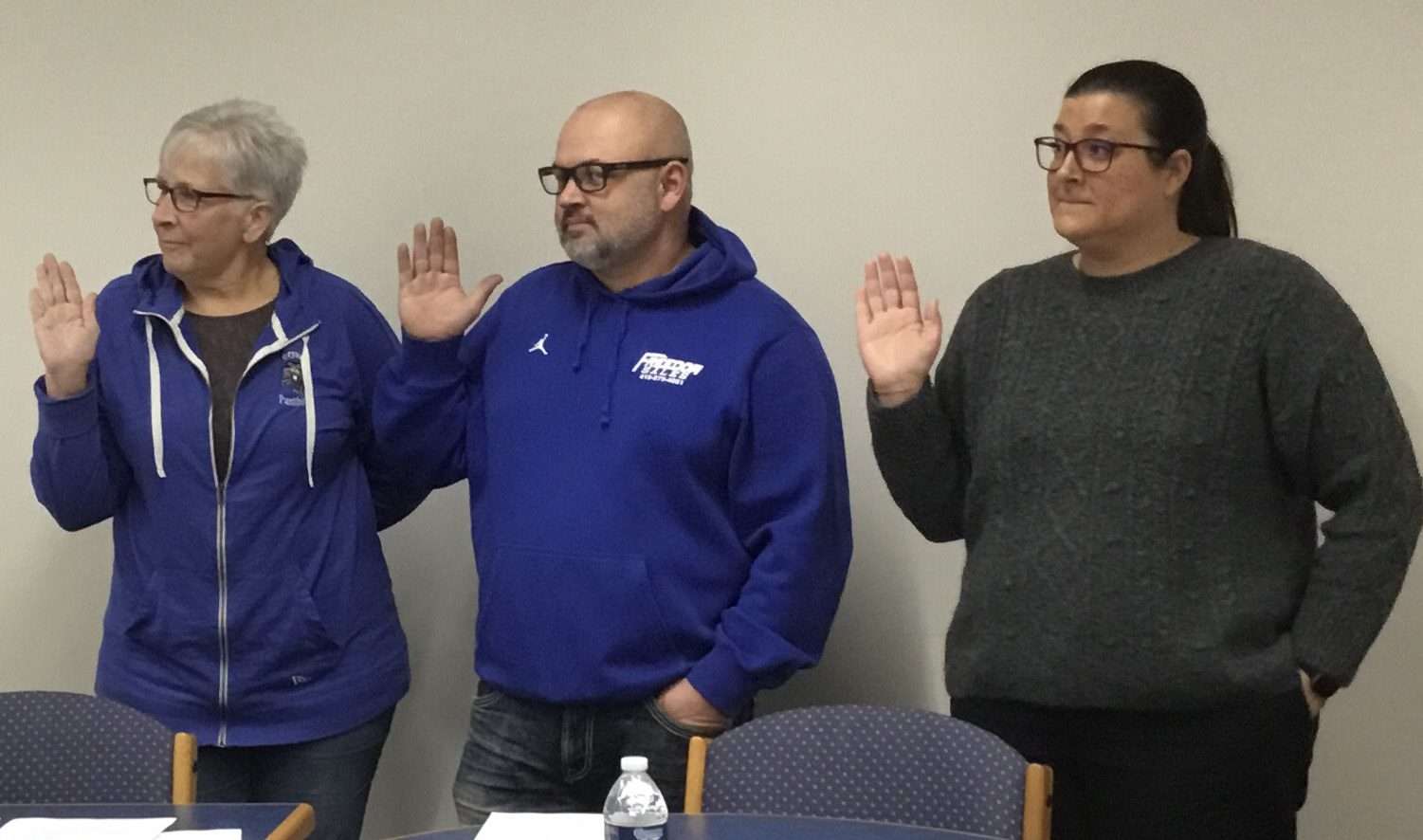 RAISE YOUR RIGHT HAND … Three Stryker School Board members took the oath of office to continue their service on the board, during the January 12, 2022 Organization meeting. Left to right are Sharon vonSeggern, Jason Leupp and Emily Clemens. (PHOTO BY REBECCA MILLER, STAFF)

The School Board for Stryker Local Schools met on Wednesday, January 12, 2022 at 5 p.m. for their Organizational Meeting, followed immediately by the regular monthly meeting.

The Oath of Office was administered by Treasurer Jill Peters to Jason Leupp, Sharon von Seggern and Emily Clemens, all returning members of the board. President Pro-Tem Jason Leupp called the meeting to order and following roll call, led the Pledge of Allegiance for the evening’s meetings.

Election of officers for the coming year placed Jason Leupp for President and Brent Froelich as Vice President again. Meetings will still be held on the third Monday of each month except for July 18, unless adjusted for unexpected reasons. They will be held at 5:30 in the HS Meeting Room.

Superintendent Appointed Board Members to the following 2022 Committees include:

Other items approved were:

-Grant Authority to the Treasurer for duties

-Grant Authority to the Superintendent for duties

The Organizational portion of the meetings adjourned at 5:17 and the Regular meeting was called to order.

The board voted to approve the January 12, 2022 Regular meeting agenda as amended and the minutes of the December 13, 2021 regular meeting.

Treasurer Jill Peters gave reports and recommendations, and was given approval for the following:

-Amendment to the Appropriations.
Dean of Students Beth Morr shared that the School Spelling Bee went well and the winner was 7th grader Aaron Cheeseman. Runner up was 5th grader Brenna Creighton and Alternate was 8th grader Hunter Rivas. The County Wide Spelling Bee will be hosted at Stryker on Monday, January 24, 2022 at 7 p.m.

Spirit week was being held during the week of this meeting. Archery has officially started with the first tournament to be held on Saturday, January 15, 2022.

-January 14 Battle of the Classes in the afternoon

-January 15 Homecoming Night vs. Tinora followed by a dance

-January 17 No School for students/Teachers PD

-agreement through the TIPS purchasing program with Duro-Last Roofing and Richland Co., Defiance, Ohio for the 1957 Gym Roof replacement

-Marilyn Frank for Tutor for 21-22 school year, under addendum

Mr. Johnson also expressed a big thank you to Mr. Matt Arnos who helped the Stryker Foundation get a $10,000 donation for students going into skilled trades.

The next meeting will be held on February 14, 2022 at 5:30 in the meeting room. With no Executive Session and no further business, the meeting adjourned at 5:30.