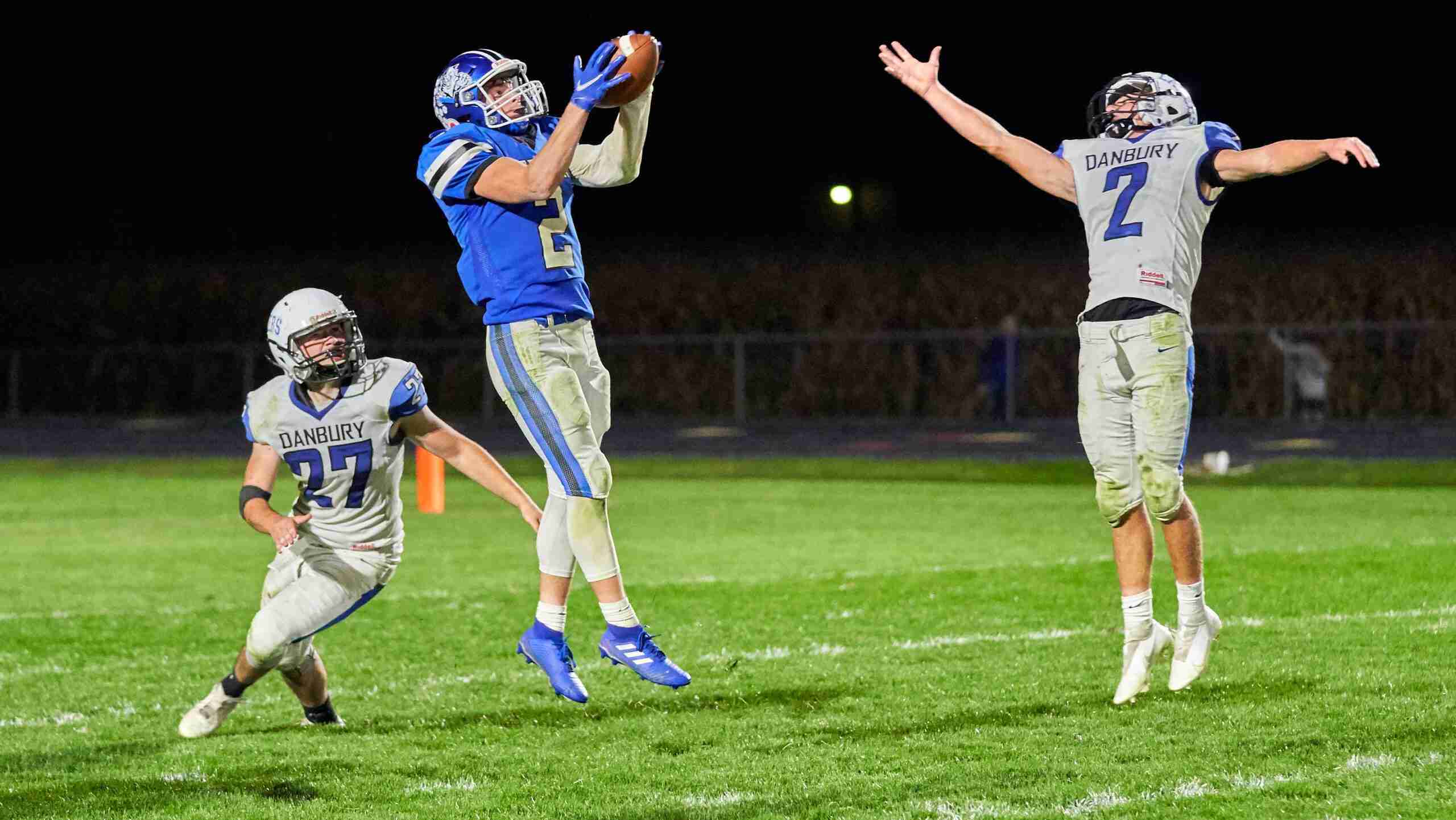 CATCH IN TRAFFIC … Kaleb Holsopple goes high between two Danbury defenders to haul in a pass. Holsopple had 11 catches on the night for 217 yards and two touchdowns. VIEW 664 PHOTOS OF THIS CONTEST ONLINE FOR FREE AT WWW.THEVILLAGEREPORTER.COM. (PHOTO BY RICH HARDING, STAFF)

STRYKER-The Panthers were on the verge of an upset last Friday night before falling to the Danbury Lakers 62-58 in a high scoring contest. Danbury jumped to an early 14-0 before Stryker responded with a nine-yard touchdown pass from Payton Woolace to Kaleb Holsopple to cut the lead to 14-8.

Stryker briefly took the lead in the second quarter with two touchdown passes by Woolace to put the Panthers in front 22-20. The Lakers added a score of their own before halftime to retake the lead 26-22. The back and forth battle continued in the third quarter as Stryker went back in front thanks to a three-yard touchdown run by Levi Barnum and after a successful two-point conversion, the Panthers were back in the lead at 30-26.

Following two Danbury touchdowns to take a 38-30 lead, Stryker answered back as Wollace hit Holsopple for 39-yard scoring pass and Amos Sloan would scoop up a fumble and return it 49 yards for a touchdown as Stryker regained the lead 44-38. The wild third quarter concluded with two Danbury scores sandwiched around a 23-yard scoring pass by Woolace to Barnum to make the score 54-52 in favor of the Lakers.

The teams combined for a whopping 58 points in the third quarter. Cole Shortridge extended the Danbury lead with a 59-yard touchdown run to make the score 62-52 before Woolace had a one-yard scoring run for Panthers to narrow the final margin.

Woolace amassed 513 yards of total offense as he threw for 462 yards and five TDs and rushed for another 51 yards for Stryker. Holsopple hauled in 11 passes on the night for 217 yards and two touchdowns.