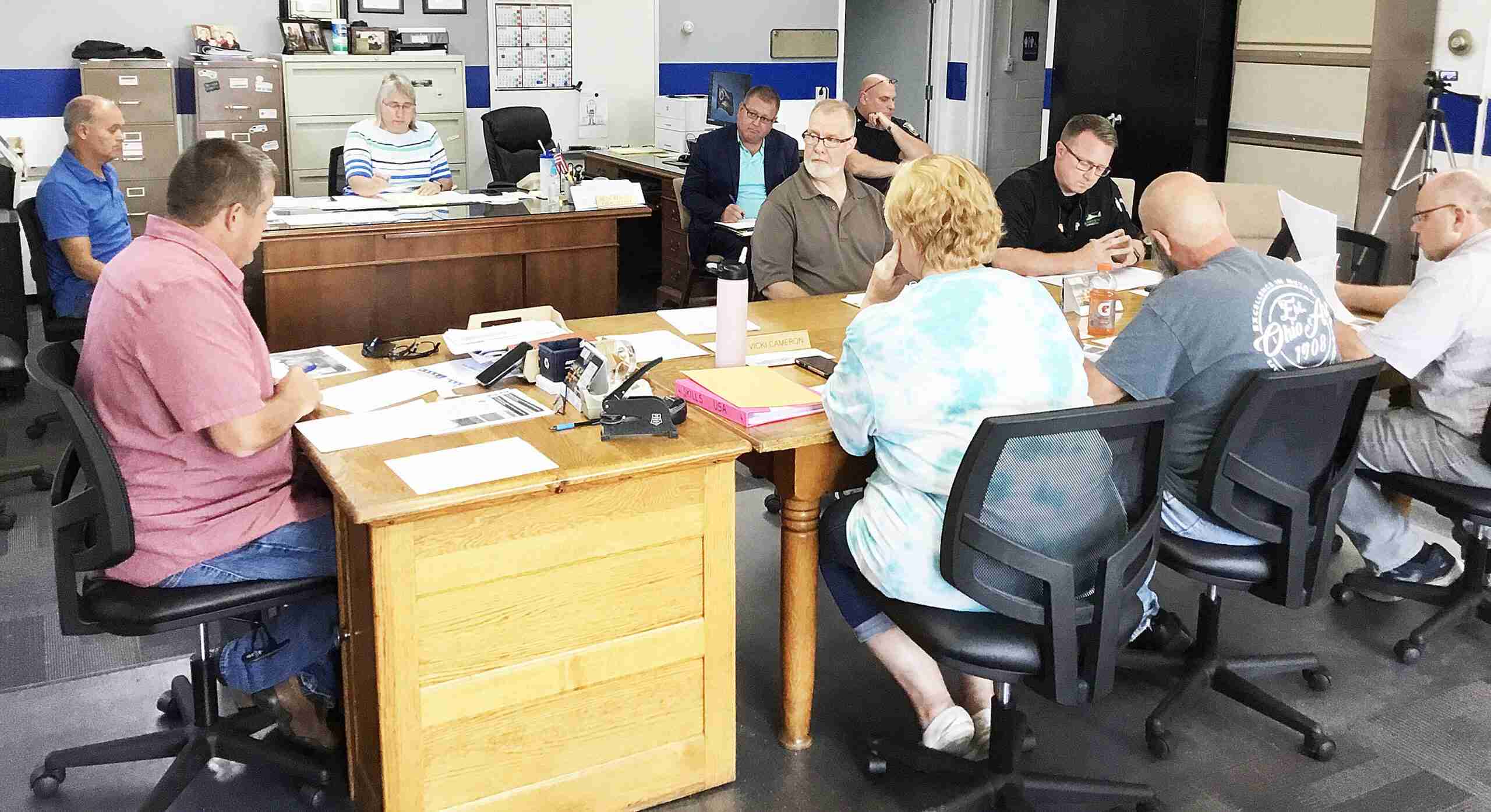 KIM, YOU ARE MISSED … Stryker Village Council met for the July 18, 2022 meeting, missing Council member Kim Feehan. Mayor Joe Beck mentioned to council that he had spoken with Feehan and that despite some health issues, she still wants to stay involved. They are discussing having her attend via Zoom. (PHOTO BY REBECCA MILLER, STAFF)

The July 18, 2022 Stryker Village Council meeting opened with Prayer led by Patsy Mealer and the Pledge of Allegiance led by Army Veteran, Jim Mealer. With roll call, all were present except council member Kim Feehan.

Mayor Joe Beck explained later in the meeting that Feehan is dealing with some health concerns and they are going to try to set it up for her to be able to attend via Zoom in the future. He asked everyone to keep her in their prayers and said she wants to stay involved.

Council voted to approve the regular minutes from June 20, 2022 and the Finance report of July 15, 2022. Welfare Committee had been scheduled to meet before the regular meeting that night but due to lack of quorum, they rescheduled for 5:30 on August 15, 2022.

A Judiciary Committee meeting was scheduled for 5:00 that night, with the regular Council meeting to be held at 6 p.m.

In communications, the mayor shared that Stryker Heritage Council will be hosting a parade on August 27 at 11 a.m. Registration forms are available in the Village Hall.

Council members were given copies of the WEDCO News updates for June and July as well as a Toledo Edison Letter of advice for keeping bills low in summer, in their packets.

-Ordinance 2022-03 “an ordinance to make appropriations for current expenses and other expenditures of the Village of Stryker, Ohio during the fiscal year ending December 31, 2022.”

-Second reading of a Resolution “accepting the amounts and rates as determined by the budget commission and authorizing the necessary tax levies and certifying them to the county auditor.”

Police Chief Steve Schlosser reported that since the last meeting there were forty-two reports, one traffic warning and two adult arrests.

He shared that despite all the changeover, the department is running well and all times are covered. Ordinance violations for tall grass and for disabled vehicles have been given out throughout the month.

He also stated that the Judiciary Committee might need to consider what to do about the new Fireworks ruling as there were a lot of complaints on FaceBook about fireworks in the village over the 4th of July. He said there were no official complaints made.

Al Riegsecker, Village Administrator informed council that the School Water Tower that is owned by the village is getting rehabbed.

When the bid package goes out it will have options for just STRYKER on it or also having a Panther. Crack sealing of the streets is complete.

Depot work was done at a cost of $2700 instead of the $6000 estimate. He mentioned the concerns heard about there not being an exit from the Tiffin River for the kayakers and canoers who enter the water at Knight’s Landing and informed council that the village crew has made a makeshift landing.

It is located on West Curtis St. on the left side of the bridge, with some natural stone put in to assist those who want to go on the river. “It may not be perfect, but it is a start,” was agreed by all.

Council went into an Executive Session to discuss land acquisition, and went back into regular with no action taken.

Council member Vicki Cameron asked if the village crew could use a weed whacker around the south sign and Riegsecker assured her that they would. Sean Ingram asked Fiscal Officer Beth Rediger if they could have copies of the handbook and it was agreed to go electronically for that.

Rediger shared that she completed the Record’s Training and that there is one online from the Ohio Attorney General’s office for council members to take.

She recommended that they do so as it is good information to know.