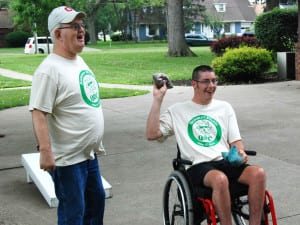 A new member of the QRC Administrative/Non-Profit Joint Board was added during their regular board meeting on Tuesday (June 23). Linda Woodall of Stryker was affirmed as a new addition to the board.

Mrs. Woodall was an elementary teacher for 42 years and recently retired after 37 years of teaching at the Stryker Local Schools. She is a mother of three children and her husband serves as the pastor at the Stryker United Brethren Church.

“We’re so happy to have you as a new board member,” said Jean Jackman, board vice president who was leading the meeting.

Bruce Abell, QRC Executive Director, presented a new cultural competency and diversity plan to the board for their approval.

“What we have in written format is what we do to support and encourage acceptance of people with diverse backgrounds and diverse interests,” he told the board members.

He said he asked Bill Priest, Director of Marketing, to write the comprehensive plan and asked him to walk the board members through it.

“What I’ve done with the plan is to show that we have respect for all of the people we work with, be it the persons that we serve, the staff and the stakeholders that we serve,” Priest told the board members.

The plan begins by saying how QRC serves people in a person-centered way, providing for respect and response to diverse belief systems, values and culture.

It points out how QRC is an Equal Opportunity Employer and encourages its vendors to participate in like manner.

It mentions how staff members receive cultural competence and sensitivity training at their orientation and through subsequent trainings through the year.

Priest spoke about the ways the plan addresses the culture of the area, how the center responds to the diverse needs of the people involved so that they can find an atmosphere of comfort and trust, and how people are included in a variety of events and activities.

After going through the individual sections of the plan, the board members voted to accept it.

In other actions, they also approved an update to the insurance policy and heard the results of a recent state audit.

Terry Fruth, Chief Financial Officer and IT Manager, said the state recently completed an audit of the cost reports of people served in the years 2010, 2011, 2012 and 2013.

He said after completing the audit that totaled $8 million in services over the 4-year period, the auditor had a finding where 2 people were billed through QRC for services they received by Title XX and their county board of DD also billed for their services through the state. He said in each case, the amount was minor, $1,600 for Henry County and $1,800 for Williams County.

Mr. Fruth said in both cases, the county boards received the funds for the services by the funding sources.

Mr. Abell shared a satisfaction survey that came from the family of a person being served who is very pleased with the services that the person receives.

Sharon von Seggern, who heads up QRC’s Northwest Employment Service, said she has also spoken with the person’s mother, and said the family is appreciative that the person has had opportunities to try different kinds of work experiences through QRC until he was able to find what worked well.

“As far as programming here, when her son has said he wanted to try something, we have been accommodating. He did the SUBWAY. He’s done enclaves. He tried food service. He’s done everything, and now he has found his niche, and she’s happy,” von Seggern said.

“She is so grateful there are opportunities for him with Quadco, and she is very, very supportive of us being there for her son, now and in the future,” she concluded.

As she went into her monthly report, von Seggern pointed out that their employment service helped four people get jobs at businesses in the area. They have an additional 8 people in job development and 3 in career exploration. She said 3 people are close to finishing their 90 days of work placement goal, and they are also serving 23 people in follow-along through the local county boards of DD.

Program Manager Shannon Zellers told the board members that people have been busy doing work lately, along with enjoying a number of activities.

She showed photos of the recent summer picnic held on June 12 at Ruihley Park in Archbold. She said the men’s and women’s clubs had gone to Jigg’s in Defiance and visited a nearby park during the past month, and the seniors had gone to the four county network day.

She said a group of people will be going to the National Thresher’s Reunion in Wauseon this week.

The next regular meeting of the board will be at noon on July 28 in the Stryker conference room.

Be the first to comment on "Stryker’s QRC Welcomes New Board Member, Accepts Diversity Plan"