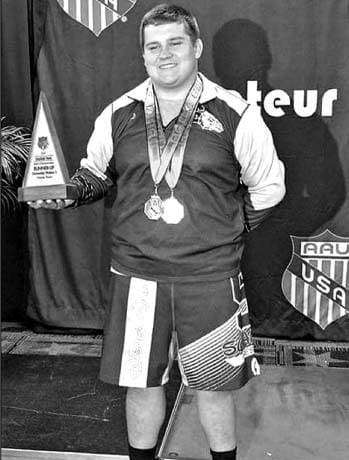 Learning to overcoming adversity and obstacles life tends to put in your way is an education that can pay dividends for as long as you live. It was a well earned dividend from that education that incoming Swanton High School senior Gregory “Greg” Wilson turned into gold, as in Gold Medal. Competing with the Swanton Wrestling Club in the 2017 AAU Scholastic Disney Duals at the ESPN Wide World of Sports Complex in Orlando, Florida this past June, Greg lead his team to a second place finsh in the Community Division by going undefeated with a 9-0 record to win the 220 pound championship. However, getting to the top of that mountain was truly a Hurculean task.

Wrestling in the 2016 DIII Sectional Tournament against an opponent from fellow NWOAL foe Delta, Greg was severly injured when the other wrestler’s full weight came down on the top of his right foot, breaking four bones. Surgery followed putting two metal plates held in place by eight screws into his foot. It may be a lifelong condition that will require an explanation whenever he passes through a metal detector. At that instant, gone was any chance to play baseball that spring and, as it turned out, he was not able to play football that fall either. The road to recovery was long and arduous but Greg worked hard and was able to wrestle his junior year as an integral part of a strong Swanton team. He finished second in the NWOAL tournament as did the Bulldogs, behind the Wauseon Indians.

In the OHSAA State Duals Tournament, Swanton went all the way to Columbus before falling to the eventual State champion Milan Edison Chargers. Individually, Greg made it to the DIII District Tournament before his season ended. And then came Orlando. Facing some of the top grappling talent in the country, Greg went up against wrestlers from the states of Florida, North Dakota, Indiana and Illinois among others. He took one one opponent after another with each of them helplessly spending some time on their back. In the end, when the referee held up Greg’s hand for the ninth consecutive time, he had reached a mountain top that seemed all but impossible just a little more than a year before. The Swanton Football Bulldogs will welcome back Greg this August when they kickoff the season to start his senior year. Then it will be back to what he does best, wrestle, with lofty goals in mind. Greg would like to continue his wrestling career in college but if that is not in the cards he plans to attend Owens Community College then move on to the University of Findlay to major in physical therapy, a demanding subject he is, obviously, quite familiar with. Given what Greg has already overcome, however, the smart money is on him.