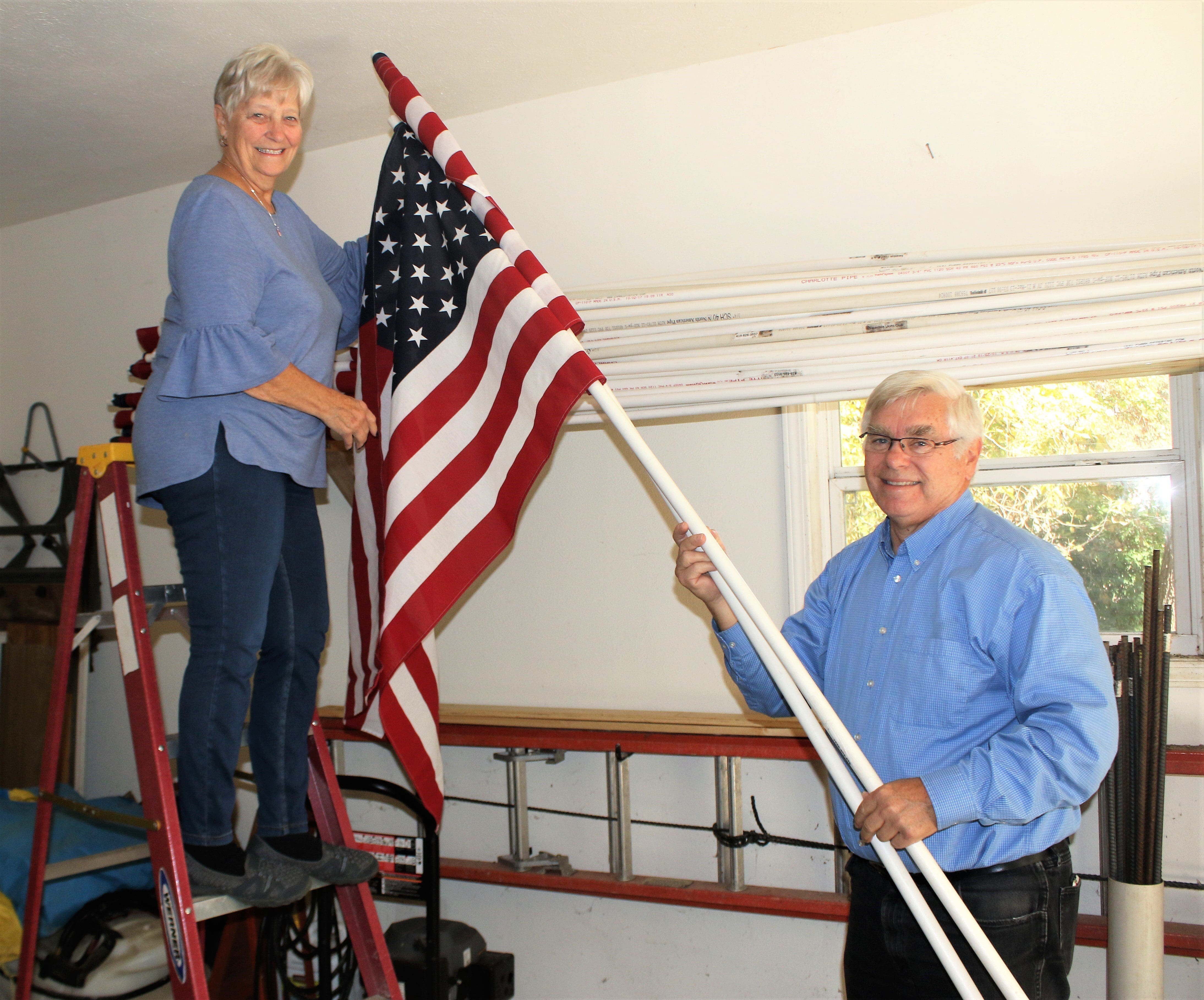 OLD GLORY… Carolyn and Joe Kahl show one of the American flags that will be displayed in someone’s yard on the next national holiday. (PHOTO BY BILL O’CONNELL, STAFF)

The Village of Swanton puts out American flags on Main Street for all the major patriotic holdidays as do many Swanton residents. In the past five years, however, you may have noticed a growing presence of America’s most iconic symbol waving throughout the village on those red-letter days. So much, in fact that some of the streets look like part of a route missing its parade.

For this big jump in the displaying of Old Glory, you can thank Carolyn and Joe Kahl and the Swanton Lions Club. In 2014, while attending a National Lions Club Convention in Kansas, Carolyn spoke with a gentleman from Wisconsin who’s home club had a program that, for a nominal fee, placed the American flag on people’s front lawn to help commemorate significant days.

Carolyn brought that idea back to the Swanton Lions and the club members thought it was a great idea. “We do it for five different holidays,” explained Carolyn. “We start with Memorial Day then Flag Day, Fourth of July, Labor Day and Veterans Day.”

The process is simple and easy and the cost is more than reasonable. A piece of rebar is inserted into the ground and a 10-foot pole with the flag attached is put over the rebar. This takes place the day before the holiday and is removed the day after. If the holiday occurs on a Monday, the flag could be placed as early as the preceding Friday.

The cost is $25 per year and this includes placing, removing and storing the flags. The program can be started any time of the year and the cost will be only for the year’s remaining holidays and restarted after the new year.

“One thing we are very adamant about is we will only buy flags that are made in America,” said Joe. “There are some cheaper flags out there but we buy only American made.” The first year of the program, flags were placed in 20 yards. That number has now grown to 184 and is expected to keep climbing. “Another thing we are very proud of is we have a couple of streets in town that are just so impressive when you turn and drive down that street and see so many of our flags,” said Joe. Brookside, Crabtree Court and Raab Road were several that were mentioned.

Twice this year the Lions Club’s American flags were on display for a special occasion. Once they lined Hallet Ave from the overpass to Airport Highway as the Eyes of Freedom Traveling Memorial passed through Swanton on its way to the Museum of Fulton County in Wauseon. The second time they were placed down Airport Highway to pay respects to a young fallen soldier on his way back home in Bryan.

Carolyn and Joe pointed out that many people will buy into the program as a gift for their family members, friends, neighbors or veterans they know as a way to thank them for their service. Anyone interested in joining this program should call Joe at 419-704-1879 or contact the Swanton Lions Club through Facebook messaging.