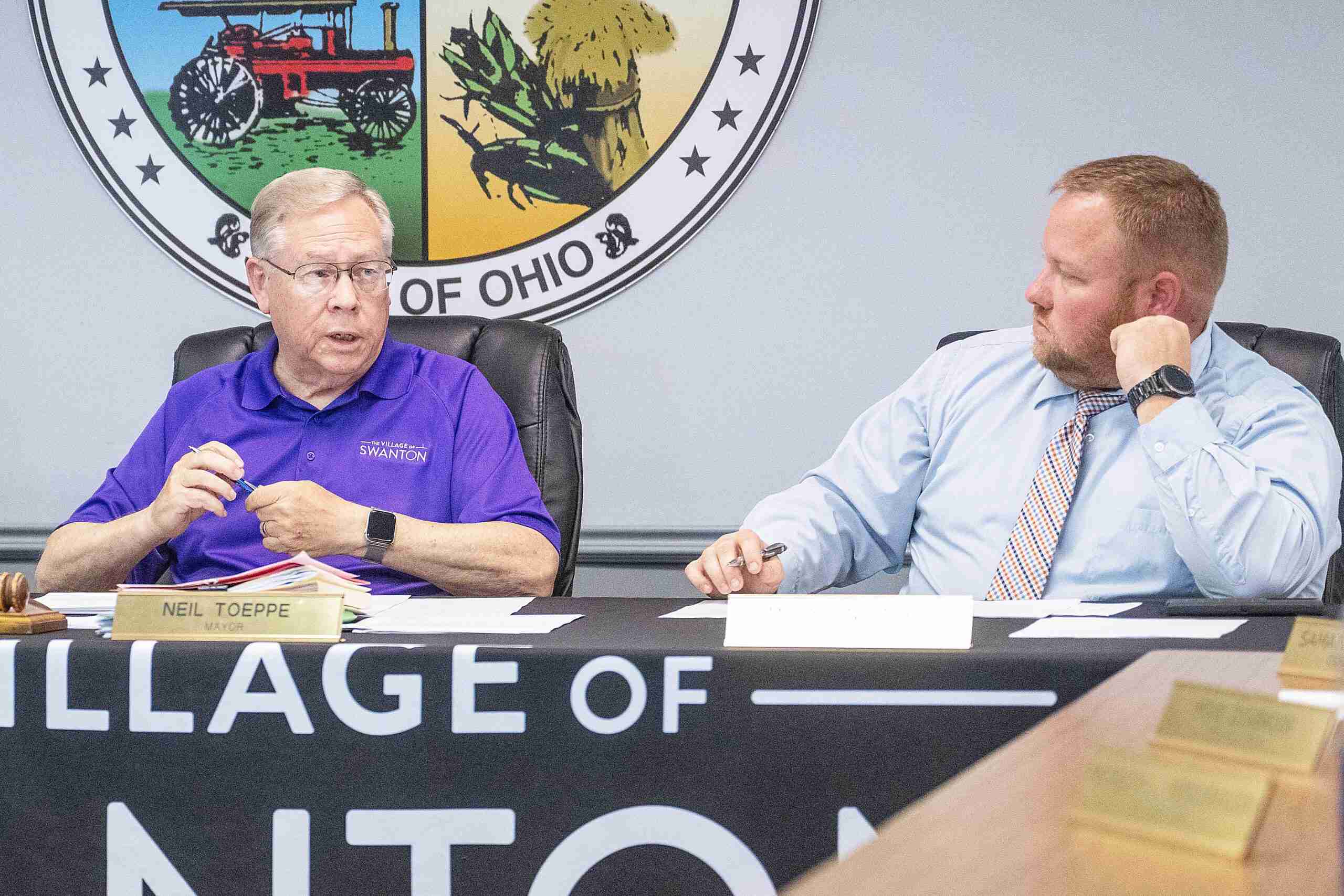 COUNCIL … Mayor Toeppe discusses the possibility of a fireworks ban in the village. (PHOTO BY JACOB KESSLER, STAFF)

The Swanton Village Council held their meeting on Monday, June 27th. The meeting began at 7:00 p.m. with a prayer and the Pledge of Allegiance. The mayor then read a statement regarding the meetings policy for live streaming.

Council then moved to approve the current agenda with additions for a discussion to opt out of allowing fireworks and for a personnel report.

The minutes for the June 13th meeting were then approved before moving on to hear Committee reports. The Public Service report was presented first with it being stated that the Storied Work at Pilliod Park needs some TLC.

The Public Library is interested in applying for a grant that will allow them to assist with the bettering of the walk. A motion was made and approved to send a resolution of support to the library.

The previous owner of 401 East Garfield had property that was also partially owned by the village. It is now for sale and will be transferred over to the new owner. A motion was made and approved to allow for the land to be owned entirely by the new owner.

Leaf collection was then discussed with a recommendation being made to enter into a three-year contract with Lehman Brothers for collection services at a cost of $26,800 a year.

Whether or not the service can be completed by the village for a lower cost will be looked at in the future as well. The recommendation was approved before moving on to the final discussion regarding the active transportation plan.

The grant previously applied for was not obtained. A point person will be needed first in order to reapply for the grant.

Next, the Public Safety Commission report was given with a parking request being discussed first. The request was for 116 South Main Street to convert a normal parking space to a handicap space.

It was decided by the commission to refresh the 90-minute parking signs on the street to help with parking in that area. The stop lights at Main Street and Church Street were then discussed.

A recommendation was made to remove the lights and place stop signs on the East and West streets, with the potential remaining for a four-way stop. Council moved to approve the removal of the stop lights.

Council then moved on the hear matters of legislation, with the following items being approved. The Second Reading to establish the final assessments for all properties in The Village of Swanton, pursuant to Ohio Revised Code Section 727.01 for the cost of leaf collection.

The Second Reading to establish the final assessments for all properties in The Village of Swanton, pursuant to Ohio Revised Code Section 727.01 for the cost of street lighting.

An Emergency Ordinance amending Ordinance 2014-31 which amended Ordinance 2006-10 establishing the rate of pay for Village Police Officers requested for duty at special events.

This amount was changed to $35 per hour with a $1 increase in 2024. Police Chief Berg stated that this amount of pay is what is charged, not what is paid to the officers.

Next was an Emergency Ordinance authorizing and directing the mayor and or village administrator to enter into an agreement with Poggemeyer Design Group for engineering services for Hallett Avenue Phase One.

Continuing, Emergency Ordinance authorizing the submission and support of an application to the Ohio Department of Natural Resources Storybook Trails within the Recreational Trails Program was approved next.

Council then discussed an Ordinance proposed by the mayor to opt out of allowing fireworks to be fired off in the village limits.

Discussion followed with Police Chief Berg stating that, in the past when it was previously illegal, there had never really been too much done about it during the holidays.

Discussion followed with Council ultimately deciding to take no action on the matter. With no action taken, fireworks will fall under state law within the Village of Swanton.

The Mayor’s Report then followed after with the first item discussed being about the upcoming fireworks display. Preparations are still underway for the show this year.

The open Village Administrators position was then discussed with it being stated by the mayor that a lot of applications had been received. Out of all the applications, four were selected and meetings were completed with each of them.

Consensus was reached by those in attendance at the meetings with one of the individuals, with it being stated more will be discussed during Executive Session.

A resident voiced her concern regarding her meter not being switched out yet. Work was done to get her scheduled to get the issue resolved.

Another resident has voiced concern regarding the pavement work on Garfield. Once a letter is received by the contractor, a walk will be scheduled to look over the area.

Moving to personnel, several changes were discussed for the Swanton Fire and Rescue Division. Resignations were received by three individuals; one individual was terminated, and another moved from full-time to part-time.

The mayor explained that these resignations and the termination were due to the individuals not being available for calls anymore.

Two individuals were also added to the roster but were not approved for full employment due to needing to obtain certifications first.

The administrator’s report was then given with it stating first that the Fire Advisory Board will be meeting this coming Wednesday, June 29th at 5:30 p.m.

One item that will most likely come up will be the issue of a ladder truck. A tentative agreement was made with a company in Pennsylvania to hold a ladder truck.

This cost is close to that of buying a new ladder truck. Other options will be discussed during that meeting. Discussions followed for other items in the report before council moved to enter into executive session at 7:38 p.m.

Following executive session, council moved to offer Shannon Shulters the position of Village Administrator with the vote being 5-1 in the affirmative.

The mayor and fiscal officer were then given consent by council to negotiate a contract with previous administrator Rosanna Hoelzle for consulting services.

Following these items, council moved to adjourn the meeting for the evening.