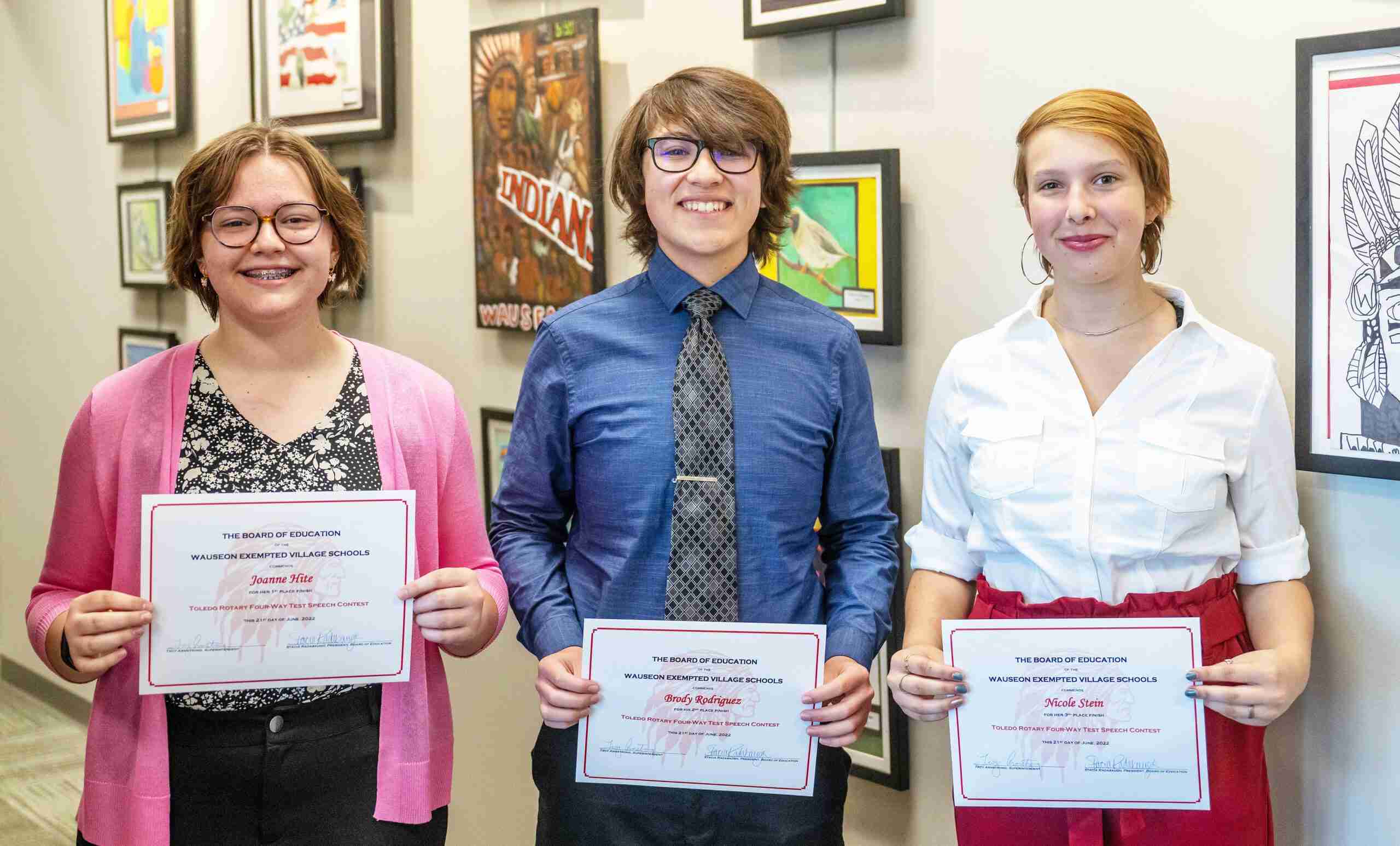 AWARDS … Joanna Hite, Brody Rodriguez and Nicole Stein stand in the Board of Education office after receiving their commendation award from the school board. (PHOTOS BY JACOB KESSLER, STAFF)

The Wauseon Board of Education held their meeting on Tuesday, June 21st. The meeting began at 5:30 p.m. with the Pledge of Allegiance.

The board first moved to approve the current agenda with additions. Next, the board recognized Matt Hutchinson, who is the WEVS Athletic Director, for being selected by his peers for the Ohio Interscholastic Athletic Administrators Meritorious Service Award.

Commendations continued with Speech students and Mrs. Dolores Muller, who is their advisor, for their performance in the Toledo Rotary Four-Way Speech Contest.

Mrs. Shehorn gave a presentation regarding the status of her department. It was stated that right now the school has around 15 bus drivers and 2 aides. There are 20 buses in total with the oldest bus being a 2001.

Buses currently have a total of over 1,000,000 miles on them. If new buses were to be order right now, the wait time is at least a year. On average 600 extracurricular trips are performed throughout the year.

A new routing system was implemented which has helped with busing and a new automatic gate opener will help with safety and the prevention of vandalism.

Mrs. Shehorn also expressed a wish list which included running water and a working toilet at the bus lot instead of a port a john. She also stated that they would like a bus garage.

When looking at the fleet, a new van is also needed due to the current ones having over 174,000 miles on them. A tank of gas was also purchased for the busses. The purchase was for 7,500 gallons at a total of $33,000.

Moving on to finances, the board discussed the possibility of a Financial Committee with it being stated a retreat may be needed in order to do research and discuss this further.

This would be considered an open to the public meeting that will be held in executive session. The minutes for the previous meeting were then approved before moving on to hear the Treasurer’s report.

GOODBYE … Superintendent Troy Armstrong and Board President Stacia Radabaugh read statements to express the fact that Treasurer Dave Fleming will be missed.

The board moved to approve the list of bills as presented and also approved the list of donations as presented. Permanent appropriations, a certificate of estimated resources, and a liability insurance contract was approved as well.

More approvals were also given for an adult liability coverage policy, the appointment of a credit card officer, public records training, and a certificate of transition.

The Superintendent report followed next with the board moving to approve all personnel recommendations made in the report. An interim Treasurer agreement was then approved for John Kahmann to operate as the school Treasurer effective from July 1st, 2022, to July 31st, 2022.

The following items were then also approved by the board. An agreement with the Northwest Ohio Juvenile Detention Center, an agreement with C-Gate Entry Systems, LTD for two motorized bus lot gates priced at $29,852, a Memorandum of Understanding with OAPSE Local #533, a Memorandum of Understanding with the Wauseon Education Association, the setting of prices for the 2022-2023 school meal prices, a motion to set the insurance protection payment for the 1:1 initiative as $30.00 for the 2022-2023 school year, a motion to set school supply/work book fees at $35.00, a motion to approve a contract with Promedica and a motion to approve Juneteenth as a holiday in the 260 Day Employee Holiday Schedule.

The board then moved to approve a Resolution for the approval of a Treasurer’s Surety Bond.

It was also decided to approve a request for the WHS FFA to attend the Washington Leadership Conference on Tuesday, July 26th through July 31st.

Both Armstrong and Board President Stacia Radabaugh then read statements thanking Treasurer Dave Fleming for his years of service.

Everyone on the board expressed how he will be missed. With no other further items to discuss, the board moved to adjourn at 6:34 p.m.