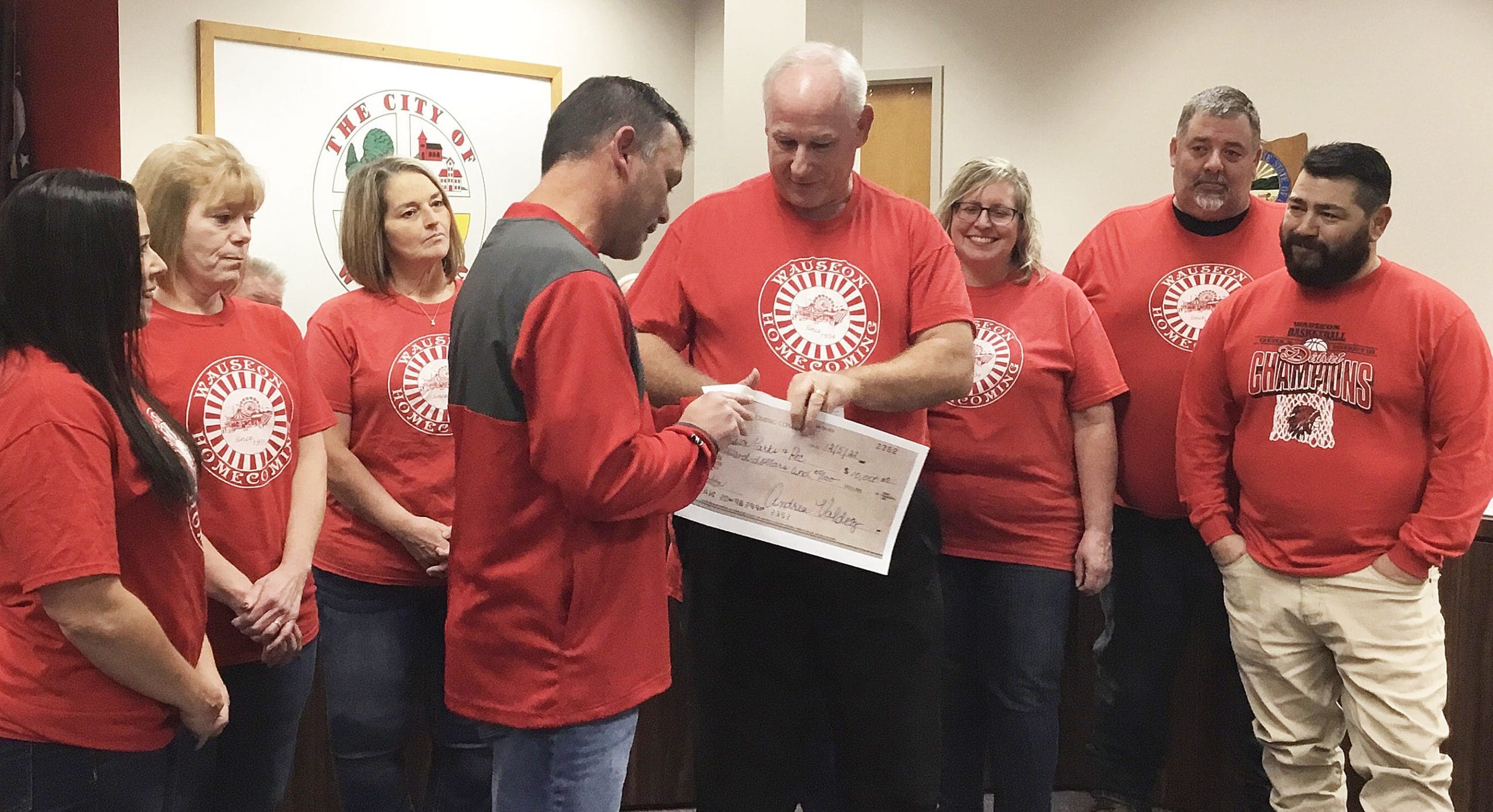 Quite close to the beginning of the December 5, 2022 meeting of Wauseon City Council, Mayor Kathy Huner welcomed a group of Wauseon Homecoming committee members, all in matching red tee-shirts, to come up for a presentation.

Co-Chair Kevin Knierim presented an oversized check in the amount of $10,000 to Parks and Rec Superintendent Matt Mennetti, surrounded by the other members.

Mennetti thanked the Homecoming committee as he accepted their generous donation. Mayor Huner thanked them all for volunteering and keeping Homecoming going.

As the members headed back to their seats, Mayor Huner asked Knierim to stay up front for a minute aa they wanted to recognize him.

Police Chief Kevin Chittenden said that Knierim will be retiring from law enforcement at the end of this year.

He has been in law enforcement for over three decades. The chief shared a few highlights of Knierim’s career and how he has been a great part of the Wauseon Police Department over the years.

Knierim was given a standing ovation and he took a few moments to shake hands with each of the council members and staff.

Another moment of recognition was given as Huner read a letter which had been sent to Wauseon Fire Chief Phil Kessler saying that he and his department had been nominated to receive the American Legion Department of Ohio Department Commanders Appreciation Award.

He has been selected to be given this award at a dinner in Columbus and the letter was an invitation to attend in January.

He and all involved in the heroic efforts on August 2, 2022 which saved the life of McKayla Parker who had been in a bad car accident, will be honored.

Kessler took a moment to explain what happened on that date, saying it was a nice Sunday morning when they were dispatched to an accident.

He shared the names of all who were involved and working before the deputies and fire department arrived. “This was a team effort,” Kessler said.

In his monthly report, Kessler shared that multiple trainings are scheduled for 2023; walk-thrus at the water treatment Plant have been good training; and the fire department will be helping with Christmas for Kids on December 10.

Chief Chittenden reported that due to the amount of donations this year they are able to spend $125 on each of 50 children during the Christmas for Kids event.

They will be driving down the streets with lights and sirens on their way to Walmart.

Director of Public Service Keith Torbet reported that his department is wrapping up all the projects as they near the end of the year.

Finance Director Jamie Giguere said they are doing the same, working on wrapping up and finalizing everything for the end of the year.

She also made a resolution change, changing a name on Resolution 33.

In committee reports, councilor Shane Chamberlin reported on the well-attended November 23, 2022 meeting of the Personnel Committee.

“At the end of the day, we decided that we want to bring this before the council as a whole, to one of our Monday night council meetings,” he said.

They also discussed vacation days for part-time employees with Sarah Wheeler suggesting engaging the part-time staff in the discussion to see if there is something they would prefer over vacation days.

He said there was no recommendation at this time concerning vacation days, but there was one for the payroll vendor topic.

Council voted to approve “a motion to bring all four (ADP,CMI, Paylocity, and Paycore) payroll vendors to council on the first meeting in 2023 so all Council Members can be present.”

She said they met in person with two gentlemen from Elgin, Illinois who own property in several states and own Dover Glen.

They have rezoned 25 acres close to Dover Glen and are interested in tapping into the line on St. Rt. 108.

She said that Keith Torbet was there and did a helpful job of educating the committee on the line in question.

“To supply water to the fairgrounds and to encourage economic growth along 108” are the intentions for that line, Torbet had told them.

The committee discussed details with the developers, covering legal issues, whether the line could handle all they are hoping for, if the storm run-off would make it not possible.

They even discussed a plan B with the storm and sewer separated. Heising said they are going to work on the engineering and get back to the committee.

Mayor Huner asked for clarification on whether it would be tied in from Clinton or Dover Township and Torbet said it would be Clinton.

Heising said there is no action to be taken presently. There was a short discussion in council about the lagoon’s position with this request.

The mayor said that the Welcome to Bethlehem event’s first night was a great success with over 400 people showing up, the Ice Sculpture will be held on December 18 and 19, and Santa will be at the depot all month off and on.

Chamberlin commented that the flower baskets downtown that have been designed with candy for Christmas are excellent.

Council went into executive session for the purpose of considering the appointment, employment, dismissal, discipline, promotion, demotion or compensation of a public employee or official.