The final meeting between the rte. 108 rivals will go down in the history books as belonging the Wauseon Indians as the Tribe dominated the Napoleon Wildcats 34-21 Friday at Harmon Field.

Napoleon wasted little time in taking the early lead on a five play, 61 yard drive. On a halfback pass, Zach Strall found Anson Lankenau all by himself in the secondary for a 45-yard strike at the 9:42 mark.

Wauseon answered right back. On their first play from scrimmage, Ty Suntken completed a 36 yard pass to Kris Boysel and the Indians were on the move. Three plays later Suntken connected with his big tight end, Noah Castle for a 35 yard touchdown pass as the Indians covered the 80 yards in four plays. Josh Whitcomb’s kick was good and the Indians tied it up at 7-7 with 8:00 left in the first quarter.

Napoleon had one more chance to score in the first quarter, but a beautifully executed blocked field goal attempt by Nate Suntken ended the threat and gave the momentum back to Wauseon.

The second quarter saw the Indians strike first on an 11 yard pass from Suntken to Zac Robinson at the 7:16 mark of the quarter. The seven-play 73 yard drive included the arm of Suntken once again as the senior leader hit Castle with a 14 yard strike, then found Derek Rupp for a 39 yard gain.

The Indians lost a fumble that led to a Napoleon score on their next possession. The Wildcats took full advantage taking over possession on the Wauseon 35 yard line. Four plays later they were in the end zone when Devon Armour galloped 25 yards to paydirt with 1:37 left in the half. Logan Peckinpaugh’s kick was good and the game was again tied at 14-14.

Wauseon second fumble occurred on their next possession and again the mistake cost them as Napoleon used the remaining seconds perfectly for a 4-play 41 yard drive to take a late first half lead 21-14 on a 12-yard pass from Blake Dunbar to Nate Rohrs with :06 seconds left on the clock. 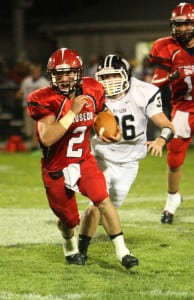 The Indians came out in the second half fired up, and Ty and Nate Suntken had a special motivator to keep them focused on the game as a side light to this game story. Suntken’s grandmother, Diane Suntken, was seeing four of her grandsons play. She also had two grandsons on the Napoleon team. She had never seen Ty play before and Suntken was well aware that his Grandma was on hand to watch. And in the second half of action he certainly did not disappoint her.

Suntken started by bursting for a 36 yard hard fought run to the Napoleon 13. The offensive line of Caleb Andrews, Josh Kauffman, Alec Vonier, Anthony Werder and Cesar Juarez continued throughout the second half to open huge holes for their backs. After taking a loss back to the 21 yard line, Suntken found Boysel for a 21 yard touchdown strike to bring Wauseon to within one point at 21-20. Whitcomb missed the extra point to the right.

The Indians defense led by Aaron Schuette, Vonier and company thwarted the Wildcats on their next possession and took over the ball at the Wauseon 32.

The big play of what would prove to be the next Wauseon scoring drive was again with a Suntken to Boysel connection for 25 yards to the Napoleon 43. Five plays later the Indians, with the churning legs of Suntken went ahead on the quarterback’s four yard touchdown run giving the Indians a 26-21 lead. The Indians went for a two-point conversion, but it failed.

Napoleon put a sustained drive together on their next possession and drove the ball down to the Wauseon 29 yard line. But on a first and 10, the ever-present Boysel was on the scene for an interception and returned the ball to the Wauseon 28 to end another Wildcat scoring threat.

Wauseon cashed in with that turnover as they drove three plays for 72 yards. The highlight play of the game, and the play that everyone will talk about was on third and three, Suntken called his own number and scampered 65 yards at the 2:21 mark to put the icing on the game with a 34-21 victory.

Suntken’ game ending stat were 10 of 14 passing for 191 yards and he rushed the ball 15 times for 115 yards. He threw three touchdown passes and ran for the other two Wauseon scores. Axel Bueter finished with 69 yards on 11 carries.

The Indians travel to Swanton Friday as they begin play in the very balanced NWOAL.