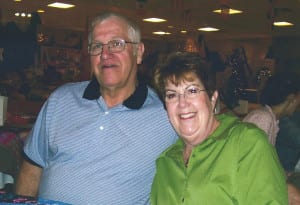 Eleven years ago on a warm summer night, laid off from his job, Jim Smith of Wauseon decided to join his wife Lois who was volunteering at a local nursing home family picnic. During the picnic, he asked the Activity Director if volunteers were needed and soon found himself regularly volunteering at Fulton Manor Nursing and Rehabilitation Center and Fulton Suites Independent Living. That family picnic ignited a passion in Jim and opened a new phase in his life of volunteering.

As a handyman, he has always enjoyed being able to help others. Volunteering has allowed him to not only help others, but to also give of himself and bring joy into the lives of others. Soon after that family picnic, Jim found himself regularly assisting with scheduled activities such as men’s groups, bingo, and resident outings to various destinations like Bob Evans, Toledo Zoo, the Toledo Mud Hens baseball games, and the Fulton County fair outings with residents. Having volunteers allows the Activity department staff to be able to provide extensive opportunities for resident outings. Jim has also enjoyed the relationships he has formed with the staff, other volunteers, and especially, the residents.

Jim affirms, “I like helping people, and I love to make them laugh. I have fun with the residents, and it lifts their spirits.”

Jim’s passion for helping others has spread beyond the walls of the nursing facility to other avenues in the community. For three years, he was actively involved with the Centennial Therapeutic Riding Stables before the organization closed.
While he enjoys spending time with the elderly, he also volunteers at the other end of the age spectrum. Both he and spouse Lois are regular reading buddies during the school year at the Wauseon Primary School. For the past six years, they have spent Friday mornings reading with students. He has even made appearances as Santa Claus and has surprised children when Santa knows them by name.

First Christian Church in Wauseon is famous for its homemade ice cream at community events such as the Cruise Nights, the Motorcycle Show, and the Fulton County Fair, and Jim is often a part of this as well. The money made from the sale of homemade ice cream funds the church mission trips which Jim has joined on several occasions.

As a volunteer of Fulton Manor, Jim naturally found himself extending his volunteer services to include the hospital as well. Fulton Manor is part of the Fulton County Health Center campus, and volunteers often share their time and talent between the nursing home, independent living, and hospital. Jim began assisting at the hospital front desk and with patient escort services from their patient rooms to X-ray and other in-facility appointments.

In 2012, he accepted the position of Fulton County Health Center Auxiliary President. This position has developed into the most rewarding experience thus far in his volunteering. In 2013, the planning began….the Auxiliary would undertake the largest project they had ever pursued. Under Jim’s leadership and multiple other key people, the Auxiliary set out to purchase a new 15 passenger van for the resident activity programs. As a volunteer of both the nursing home and independent living, Jim realized firsthand the importance of outings for residents. The current van was older and had design issues that presented challenges for Activity staff when planning outings.

Along with the work of many volunteers and FCHC staff, the Auxiliary was able to raise the money for the van through various fundraisers, predominantly the annual June golf outing. In February of this year, the Fulton Manor and Fulton Suites Activity Departments were presented with a custom designed van allowing for greater storage and the ability to transport more residents on outings. Jim was present for this special moment with an unforgettable smile. It’s a moment he will always treasure.

Besides volunteering, family is also very important to this community minded man. On July 1, Jim and Lois will be married 53 years. They have three children, six grandchildren, and 2 great-grandchildren. Retired from Yoder Heating, his hobbies over the years have included woodworking and doing craft shows with Lois. Now, he dedicates his time to family, helping others through volunteer service, and with a laugh, he says, my recliner!

Jim has blessed many through his selfless actions and friendship. His easy-going, lighthearted nature makes him a worthy face to shine in this volunteer tribute. Volunteers leave their mark on many and expect nothing in return. Thank you Jim for everything you have done and continue to do for your community of Wauseon.