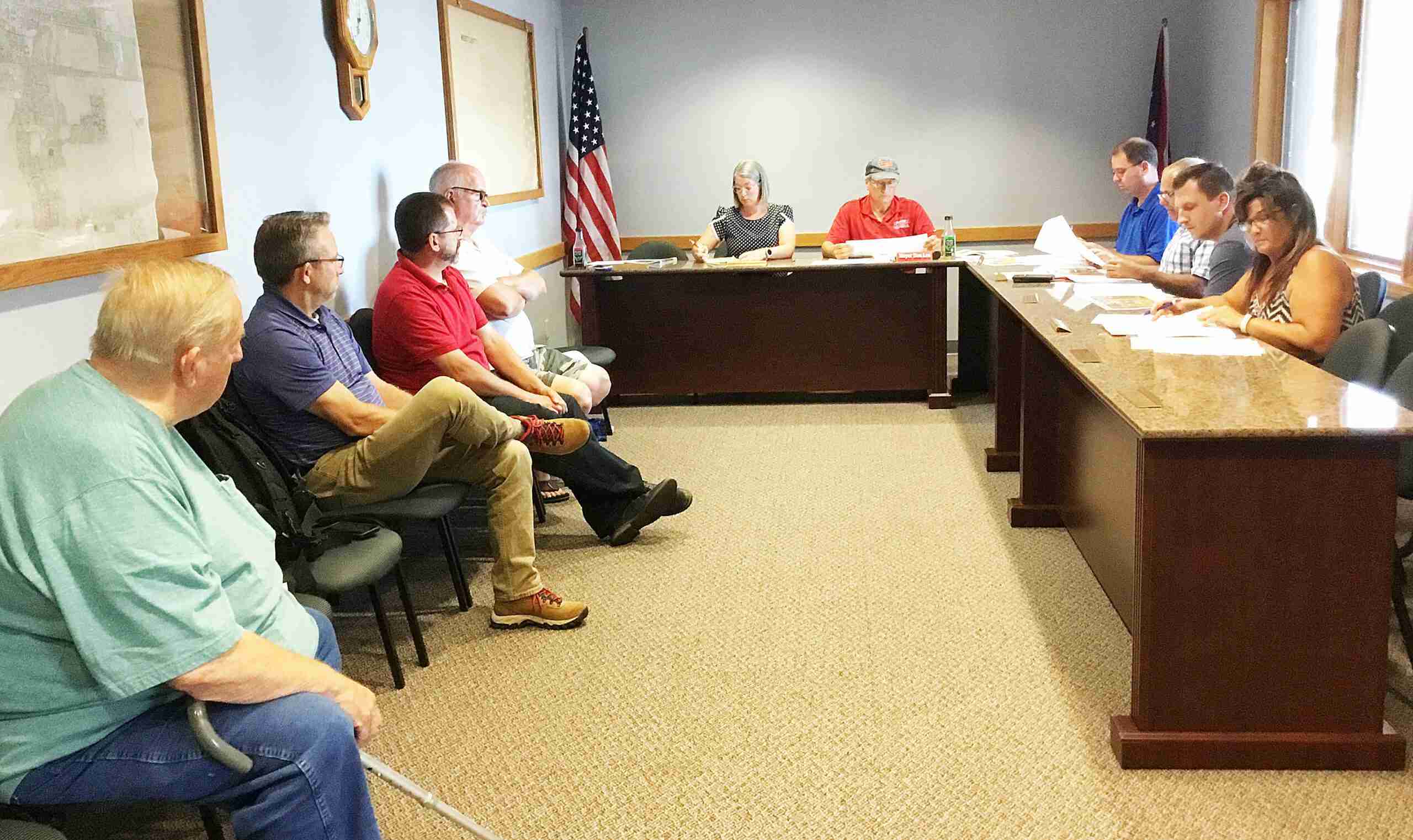 ZONING COMMITTEE … A small group gathered in the West Unity Village Council chamber on June 30, 2022 to discuss some possible changes. On the committee from front to back on the right are Lisa Woodring, Jarrett Wyse, Tim Calvin and Kevin Gray. Mayor Don Leu and Deputy Clerk Aubrey Jennings presided over the meeting. Against the wall on the left, front to back, are Kee Mansfield, Brad Copp, Josh Fritsch and Steve Marvin. (PHOTO BY REBECCA MILLER, STAFF)

First on the agenda was a discussion on the possibility of rezoning a piece of property to allow Family Dollar Dollar Tree to come to town.

A formal request was made by Development Management Group, LLC on behalf of Mr. Kee Mansfield to rezone a 1.35 acre piece of his overall property located on part of the land where the old High School used to be.

The goal was to gain approval from the village to rezone the property from S-1 (special district) to C-1 (Downtown Business) classification.

This would need to be done before Family Dollar could build there. Mr. Mansfield and a representative from Compton Addy, Brad Copp, were present to answer any questions that the committee might have.

The portion of his property being considered is on St. Rt. 127, quite close to Main Stop so it would fit easily in with the downtown area, making it within walking distance for many. Copp said the store’s desire is to offer groceries and other items to the residents.

All committee members voted in favor of allowing this property to be rezoned to be C-1, with the understanding that the next step is to take that to council.

Mayor Don Leu shared with committee that he has heard nothing but positive comments from the community and no one else shared any comments they may have heard.

The second item on the agenda was an ordinance amending Ordinance 1113.2(d) and (e) regarding storm sewer pipe materials and driveway culverts in open ditches.

Village Administrator explained that this would just make it ok for residents to put in different sized tiles instead of everyone needing to put in 12 inch tiles as it previously stated.

Committee member Lisa Woodring asked a number of questions to clarify exactly what was being amended in the ordinance. With approval, this amendment gives the Village Administrator the ability to allow smaller tiles where 12-inch ones are not needed.

It also states the type of tiles needed so that the old ones that corroded easily will not be used anymore.

The plastic or cement tiles also allow for the cleaner that the village uses, to be able to clean them without getting stuck.

The Committee members all voted in favor of this amendment, with Woodring saying that she will trust the others on the committee as she was still not sure.

With no further business, the Committee meeting was adjourned.