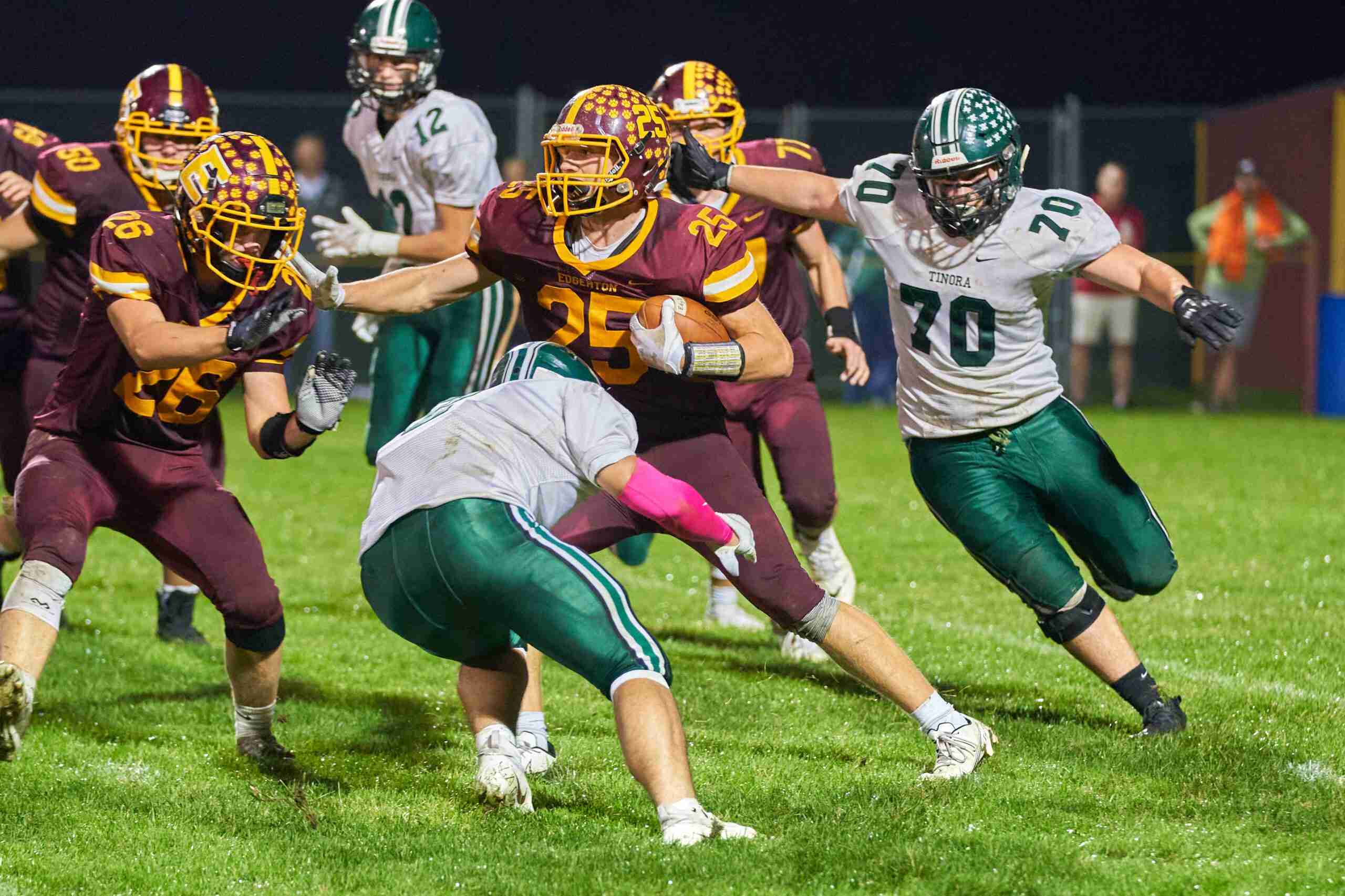 EDGERTON – The Bulldogs lost four fumbles and Tinora turned each one into touchdowns, while Tinora running back K.P. Delarber scored a career high six touchdowns in Tinora’s 54-8 win over Edgerton. Delarber scored on runs of five, 13, nine, five, three and 40.

Along with his six rushing touchdowns, Delarber also rushed for 125 yards on just 12 carries.

“The line blocked really well for me,” Delarber said. “(As a team), we practiced hard all week, (like we) were ready to play and we did it in the game.”

With the win, Tinora moved closer to winning a GMC title, improving to 5-0 in the GMC and 8-0 overall, Edgerton dropped to 4-4 overall and 2-3 in the GMC.

Tinora’s defense was stout on the night, too, especially in the first half. In those first two quarters, the Rams defense held Tinora to just one first down and 19 total yards.

“We knew they were a really good football team and they controlled both sides of the football and the football game,” said Edgerton head coach Brody Flegal.

For the game, Edgerton was held to just four yards rushing and three first downs. The Bulldogs did manage to gain 62 yards passing but were held to just 66 total yards overall.

“Defensively is where we hang our hat,” said Tinora coach Kenny Krouse. “We make teams one dimensional. Winning three of our first four games against really tough competition (those four teams had a combined won-loss record of 23-9) has really paid off.”

“They (the team is) really beginning to hit their stride. (Also), this group has a lot of fun playing and practicing.”  Tinora put the game away early by capitalizing on two Edgerton first half fumbles and great field position.

After forcing Edgerton to a three and out on its first series, Tinora started its first drive on the Edgerton 36, after a short punt.

The drive took just four plays, with Delarber carrying the ball on all four plays. His five-yard run to paydirt capped off the first scoring drive, to give the Rams a 6-0 lead.

Tinora started its next drive on its own 44-yard line, after another Edgerton punt. Delarber capped off the five-play drive with a 13-yard touchdown run and Tinora led, 13-0.

Four plays later, Tinora started its next drive on the Edgerton eight-yard line, after a fumble recovery. This time, Tinora quarterback Nolan Schafer hit Casen Wolfrum with an eight-yard scoring strike, on the very first play.

Tinora started its next scoring drive from the Edgerton 38, after another short Edgerton punt. Delarber’s nine-yard run capped off the drive, putting Tinora up, 27-0.

Tinora then took advantage of another Edgerton fumble, taking over at the Edgerton 14-yard line. Two plays later, Delarber rumbled in from the five-yard line.

Tinora then finished off the first half scoring with Delarber’s three-yard scoring run. That gave Tinora a 41-0 halftime lead. Next, Tinora scored on its first drive of the second half, on Delarber’s 40-yard touchdown scamper.

Edgerton finally got on the board when quarterback Corey Everetts threw a 33-yard scoring strike to Kadyn Picillo.

Tinora’s Cole Sweinhagen capped off the scoring with a 22-yard TD. Sweinhagen finished with 63 yards on 12 carries.

Everetts paced the Edgerton offense with 62 yards passing on six completions in 13 attempts.