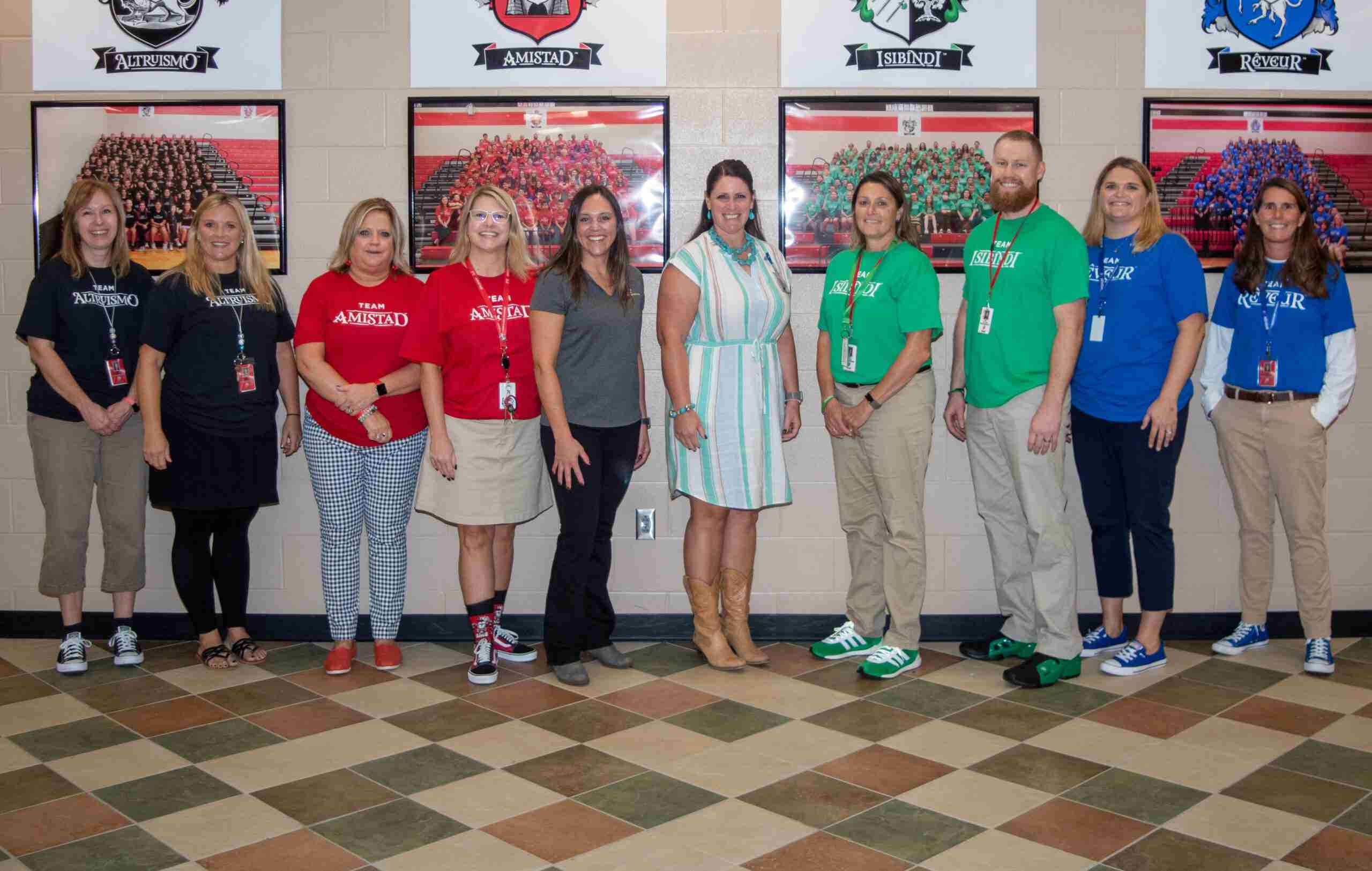 HOUSE LEADERS … House Leaders and other teachers along with members of the Wauseon Rotary stood in front of the house crests for each of the four houses at the school. Included on a wall, under each crest, was also a picture of all of the students that were placed into each of the houses. Pictured are: Sheila Vernot, Amber Fryzel, Jill Martinez, Kimberly Hinton, Toni Schindler, Britney Ward, Chris Zirkle, Dan Snyder, Ashley Oyer, Joy Hutchinson. (PHOTO BY JACOB KESSLER, STAFF)

The group was shown around the Middle School to see what their donations were able to accomplish. The Wauseon Rotary had previously donated $5,000 to the school that helped purchase shirts for the students and staff as well as a couple other items.

Shirts were provided by Ace Hardware who worked with the school to price the shirts comfortably. The shirts were done to help students and staff with the new Ron Clark Academy that the school has started working on.

Principal Friess explained that around 3 years ago, the school began sending staff down to the Ron Clark Academy in Atlanta, Georgia.

Mr. Friess himself was one of the first members of the staff to go to the Academy. It was his intention, after going to the academy, to bring as much of it back with him as he could. In the school and with the academy, students in grades six through eight as split into four different groups or houses as they are called.

The houses are made up randomly with the choices being taken from the entire student body. This means that they are not split between grades either with each group including students from all grades in the school.

Students stay in the same house that they started in when they entered into middle school. “It is all about relationships, culture and getting away from the stress of it all and being together.

It allows everyone once a week to step away from academics during one period to look at the social and emotional needs of the students,” said Mr. Friess. The shirts were colored to match their house color and also had the house name on them as well.

Each house collects points that are received from student actions. Points can be earned through having school spirit, academics, kind actions, being a good citizen and more. The points create a competition environment for the kids that pushes them towards positive actions.

These actions help to focus them to build character. Televisions throughout the school have also been updated to show the progress of each of the houses.

The screens show the progress of each of the houses, which house is in first place, and the last four students that earned a point for their house. When another house takes over, an animation takes over the screen and announces that the other team is now in the lead.

The school also provides an app for the parents that allows them to see the progress of each of their children and shows them when they have done a good deed.

The houses themselves were pulled directly from the Ron Clark Academy along with all other materials and brought over to Wauseon. During the tour, the students were having their weekly house meeting.

The meeting itself is more of a team building exercise than an actually meeting with each house working on something different. Students were working together on activities in the gym, decorating pumpkins with 3rd graders that were to then be donated, practicing their house cheer and more.

The plan originally was to look at starting the program in 2020 but due to the pandemic it was put on hold. The project was also shown to the Rotary before it was fully implemented, and they were more than willing to help in any way they could.

Even with having to push the program back a full year, the Rotarians were still eager to help. “To come in and see the house meetings and how it is building relationships that probably wouldn’t have happened naturally is amazing. It is truly nice to see,” said Toni Schindler who is the President of the Wauseon Rotary.

There has already been some results so far since the beginning of this school year. “Students from different grades know each other better now and have been helping each other.”

“The whole goal is for everyone to work hard and be good people and so far, the things I have seen show it is going in the right directions,” said Mr. Friess.

Overall, the whole thing is a team effort. It is a learning curve that most teachers are embracing it as well as shining a light on positive behaviors.