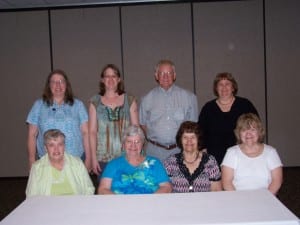 The Williams County Genealogical Society held their Thirty-Second Annual Banquet on June 8, 2015 at the Moose Lodge in Montpelier, Ohio. President Pat Goebel welcomed everyone and then a delicious buffet style dinner was enjoyed by all.

The guest speaker, Steve Ball, is a historian and musician from Columbus, Ohio, who performed in a Civil War uniform. He first became interested in the American Civil War, at the age of twelve, when he saw a picture of his great great grandfather in his Civil War uniform. Later, Steve studied the war, learned to play guitar and played in many kinds of bands. He became interested in the music played during the war and learned who the composers were, year the music was written, what inspired the writing of the song and what was going on in the war during that time period. He played on a pre-Civil War Martin guitar and sang Dixie, Goober Peas, Battle Hymn of the Republic and many others.

The purpose of the WCGS is preservation of county records and family research. Monthly meetings are held on the second Monday of each month, excluding July and August, at 6:30pm, in the conference room of the West Annex of the Bryan Public Library. The public in invited to attend all meetings. For further information concerning the WCGS, visit the Website at www.wcgs-ogs.com or write the WCGS, P.O. 293, Bryan, Ohio 43506.