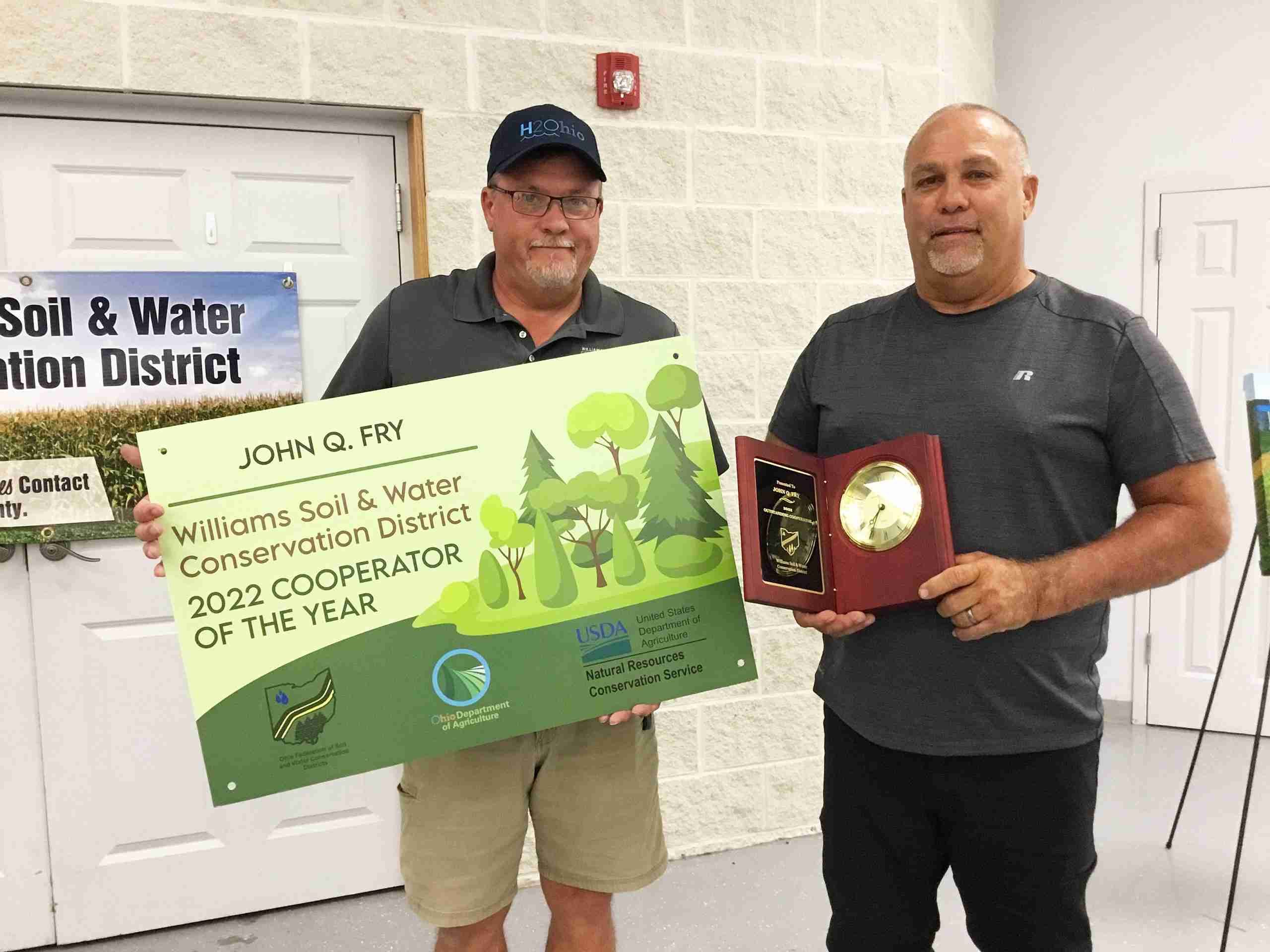 CONSERVATION AWARD … John Q. Fry, a Williams County farmer who takes conservation practices very seriously, was given an award at the 75th Anniversary meeting of the Williams Soil and Water Conservation District.  This award was for the 2022 Cooperator of the Year and was presented by SWCD staff member, Steve Slattman. John’s wife, Kim Fry, was present and proud of her husband for all he has accomplished and plans to accomplish. (PHOTOS BY REBECCA MILLER,STAFF)

Dinner and entertainment, along with the annual SWCD meeting, were held at the Veteran’s Building in Montpelier on Thursday, August 25, 2022, to celebrate 75 years of conservation in Williams County.

Voting for Board of Supervisors candidates and a social hour ran from 5:30-6:30 with folks arriving and greeting their friends and neighbors and choosing a table for their dinner.

Serving on the Board of Supervisors gives area residents who “have the mutual interest in conserving our land and water for those who live beyond us” to be more actively involved in Conservation.

District Technician, Manuel Lay, or Manny as he is called by his co-workers, welcomed everyone for the dinner and shared a report on some things that have happened in the county over the past year, with conservation.

This group spent the year staying on top of complaints such as soil erosion, with no “true violations,” and working to help area farmers as they make healthy choices for the land.

One point of interest included the opportunities he had to help install some wetlands and a number of waterways.  He spoke about cover crops and how that is helping the land.

Just under 1 million dollars have been paid out to H2Ohio producers and with the 77 H2Ohio contracts there is a possibility of 5.8 million dollars being brought back into Williams County.

The office has also assisted land owners with wildlife and habitat management. They have done engineering design for waterways, wetlands, filter strips, etc.

In the past year he designed 9 waterways and 5 of them have been completed, with one of them being a cascading waterway. He is also designing an Insta-turf outlet, a very new concept.  Two wetlands have been designed, with one completed.

Anne Marie Michael said she was so happy to see everyone together again after the two years of holding open houses with very few coming due to COVID.

She welcomed everyone, announced that there were photo albums for all to enjoy, and then led in prayer for the dinner and the evening. She thanked God for the 75 years of conservation in Williams County. 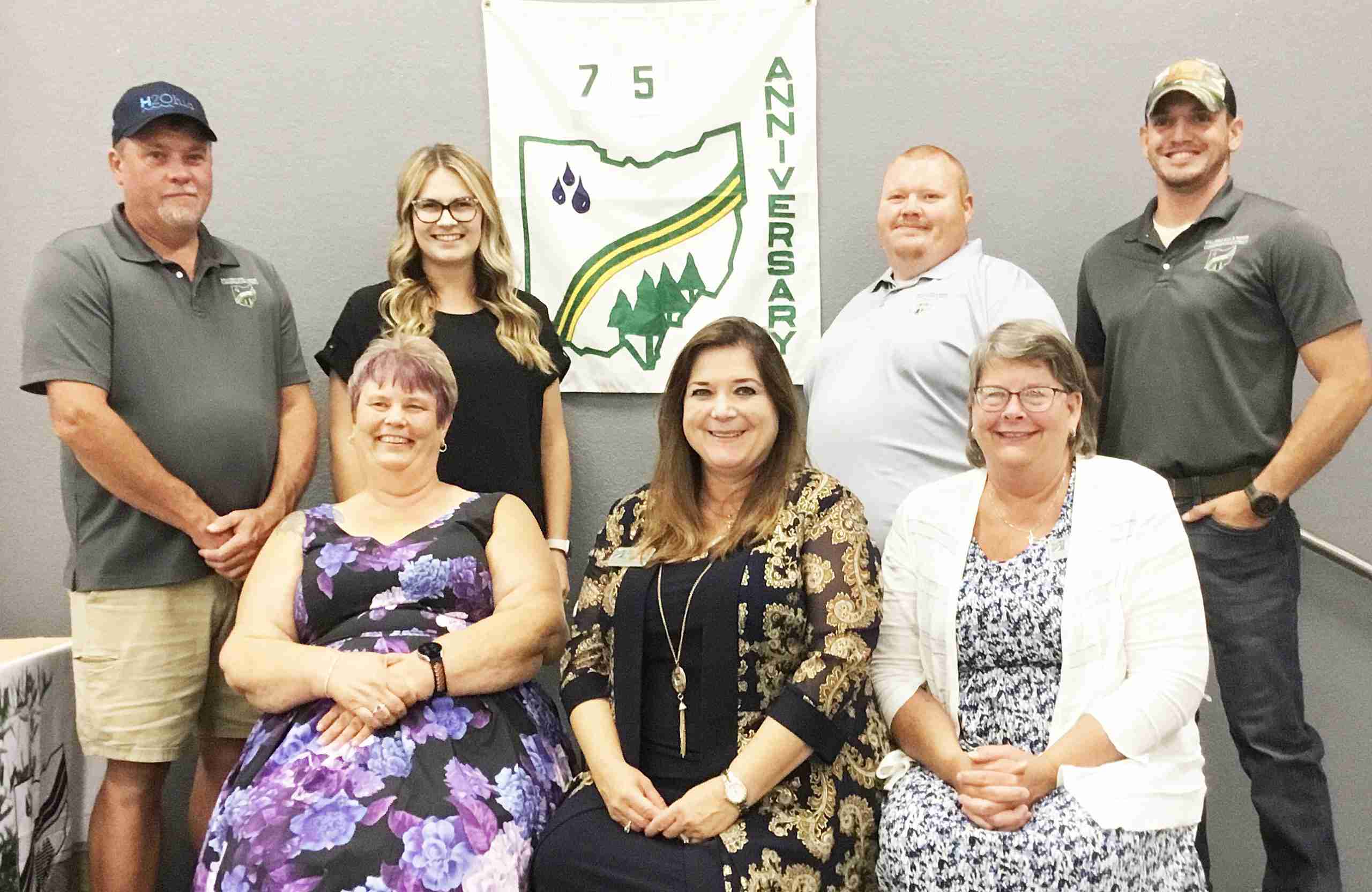 Following the dinner which was catered by Susie’s of Bryan, local musician John Reichle, who hails from Montpelier and happens to be brother-in-law of the man who was awarded that evening, wowed the appreciative audience with his mellow voice and delightful choice of oldies.

From John Denver’s “Country Roads” and James Taylors’s “You’ve Got a Friend” to The Beatles “Here Comes the Sun” and Elvis’s “I Can’t Help Falling in Love with You”, he played with feeling and fun.

Three guitars and a ukulele were his instruments of choice as his fingers played the strings with finesse and beauty. Thanks, John, for a great mini concert.

Speaking of the award, John Fry was praised as “an innovative who is not afraid to take chances.”  Steve Slattman, H2Ohio Technician, shared the words of praise and presented the 2022 Cooperator of the Year to Fry, who currently farms 850 acres with much of it being no-till.

He is all about doing what is best for the land and has recently acquired some land which he plans to farm organically with rye as a cover crop.

He feels strongly about waterways in every farm and he installs his own. He uses conservation practices in every area of his farming and is a great example in Williams County.

The Williams Soil and Water Conservation District moved to a new home and is now located at 11246 St. Rt. 15, Montpelier.

The staff is available to help anyone interested in learning ways to help our land with conservation practices and can be reached at 419-636-9395, williamsswcd.org or contact@williamsswcd.org as well as on FaceBook at Williams SWCD.