This year’s theme for the Stryker High School 2022-23 Homecoming ceremony was “Starry Night/Under the Stars” and their colors were navy blue, gray and gold.

The girls were all dressed in variations of those colors and stood tall and gorgeous as they walked the white runway with their handsome attendants.

The song “Going, Going, Gone” by Luke Combs was chosen by the King and Queen. The Homecoming Court was presented to a gym full of proud friends and family as Stryker got ready to play Montpelier for their Homecoming game on Friday, January 20, 2023.

The dance was held on Saturday, making a lovely long weekend for all involved.

This year’s Stryker Freshmen attendants were Callie Stantz and William Donovan. Callie is the daughter of Bronson and Jessica Shock. She has two younger brothers: Lane and Brantley.

This humorous, outgoing and headstrong freshman says her hobbies include working out, watching tv and hanging out with her friends.

Her favorite food is cheesecake or her mom’s homemade Mac & cheese. Callie says her ideal Saturday night is hanging out with friends. She would like to visit Lake Huron or Panama City because she loves the beach.

After high school, Callie plans on going to college (hopefully North Carolina) to become a nurse, then move to Oregon.

Callie was escorted by William Donovan, the son of Abby and Mike Donovan. He has two older brothers Michael and Daniel and two younger sisters Anna & Ellie.

This athletic, smart and competitive freshman enjoys sports, fishing, and skiing. Here at Stryker, William is involved with golf, basketball, baseball, and FCA.

He says his favorite food is burgers. William has stated his ideal Saturday night would be watching football and sleeping. His favorite TV Show is “The Office” and his favorite movie is “Top Gun Maverick.”

He would like to visit Alaska to see the Northern Lights, and his future plans are to go to college to become a teacher, come back to Stryker and settle down and start a family.

The sophomore class chose Tara Noble and Garret Moser as their attendants. Tara is the daughter of Dayna and Scott Noble. She has one older sister, Natalie.

She is involved with volleyball, cheer, archery, and horseback riding. Her hobbies include teaching her dog tricks, watching Grey’s Anatomy, and learning languages.

The three things she would bring with her on a deserted island would be her phone, bug spray, and allergy pills.

Her ideal Saturday night would be going out with friends to get Chipotle. Her future plans are to join the Army and become an intelligence translator. After the Army she wants to join the CIA.

Tara was escorted by Garret Moser, the son of Laura and Doug Moser. Garret has one older brother, Cody. Garret is involved with track, cross country, archery and Spanish & Art Club.

His hobbies include hunting, running, shooting, paint-balling, and music. This fast, dangerous and funny sophomore has stated his favorite food is a good ol’ fish fry.

Garret’s favorite book is “If You Give a Mouse a Cookie. Garret’s dream vacation would be to Nashville because of the country music.

His future plans are to attend Hocking College and become a state Game Warden.

The junior class was represented by Laura Leupp and Gavin LaBo. Laura is the daughter of Shawna and Jason Leupp. She has two older sisters Anissa and Kyleigh.

This outgoing, brutally honest and emotional junior says her ideal Saturday night would be hanging out with her friends and boyfriend. Her favorite book is Girl in Pieces, and her favorite TV show is “Below Deck.”

Laura has stated that she would like to go on a Hawaiian Cruise so she can see all of the Hawaiian Islands.

Her plans after high school include going to Ohio State to become an RN, get married, and start a family.

Laura was escorted by Gavin LaBo, the son of Amy and Chris Lloyd and Crystal and Dustin LaBo. He has six siblings: Gavin, Jaren, Dominic, Kaitlyn, Chandler, and Emma. He is involved with golf, basketball, baseball and track.

His hobbies include playing sports with the boys, visiting Cedar Point with his aunt and uncle, hanging out with his girlfriend, and playing Fortnite with Elijah Lerma.

This outgoing, energetic and athletic junior has stated that if he were stranded on an island, he would want a generator, Xbox, and a tv so he could play Fortnite.

His favorite movie is “Superbad” and favorite tv show is “Holey Moley.” Gavin has stated that his future plans include attending Lift Academy in Indianapolis, becoming a pilot, moving to Columbus and starting a family.

The senior class of 2023 selected Gabrielle Ramon and Jaydin Rethmel as their senior attendants. Gabrielle is the daughter of Brandy Haynes and Joseph Ramon. She has three older siblings: Tristin, Jenna, and Joe, and two younger siblings Jacob and Jayce.

She is involved with basketball, softball, FCA, FFA, and Student Council. She often enjoys taking naps, working out, watching tv, and shopping.

This talkative, caring and gullible senior has stated her favorite foods are tacos and cheesecake. Her ideal Saturday night would be staying in and reading or watching a movie with friends or the fam.

Her favorite movie is “The Last Song,” and favorite book is Ugly Love.  Her plans for the future include going to cosmetology school to get her license, getting married, and starting a family.

Senior attendant Jaydin Rethmel is the son of Amanda and David Rethmel. He has a younger sister Taylore.

During his time here at Stryker he has been involved in Football, Basketball, and Track. He likes to spend his time hanging out with the boys and his girlfriend.

This goober, shot-caller and wild senior has stated his favorite food is pasta. If he were to be stranded on an island, he would like to bring a boat, paddle, and his pet pig.

If he were to take a dream vacation, Jaydin said he would like to go to Greece because of its history and beautiful environment.

Jaydin has stated that after school he plans on attending college, continuing his football career, and starting a family.

The Homecoming King and Queen from the class of 2022 were: Haylee Fulk and Teyvon Harris. Haylee is the daughter of Coleen and Shaun Fulk. She has four younger sisters: Emma, Addalee, Abby, and Lily. Her hobbies include hanging out with her daughter and friends.

Currently Haylee works at the vision center at Walmart. Her favorite memory of high school is playing sports with her best friends and going to Chicago for the Spanish/Art Club trip.

Teyvon is the son of April and Scott Sloan. He has an older brother Otis and an older sister Abby. His hobbies include hanging out with friends and family.

He is working at Sauders in Stryker and holds fond memories of playing football and basketball with his friends.

The class of 2035 was represented by Sawyer Heath and Xander Myers. Sawyer is the daughter of Taylor and Cole Heath. She has an older sister Harper and younger brother Blaine.

She enjoys being outside with all her animals, spending time at dance and soccer, and she loves playing with her friends and fighting with her siblings. Her favorite movie is “The Grinch.”

Her favorite foods are tacos and cheeseburgers. When she grows up she would like to be a vet. If Sawyer could meet anybody it would be Dr. Pol so she could be on his show and learn all about animals.

The crown bearer was Xander Myers. Xander is the son of Renee and Jared Myers.

He has three older sisters: Madi, Kaitlyn, and Raegan. During his free time, he likes swimming, playing with his dog Ace, sleeping, building Legos, going to the zoo, and playing with Levi and Jacob.

His favorite movie is “The Three Stooges,” and his favorite food is sushi. When he grows up, he said he wants to be a teacher.

If Xander could meet anybody it would be Spiderman because he could teach Xander all of his tricks.

The student body of Stryker High School selected Levi Barnum and Kaitlyn Myers as their 2022-2023 Homecoming King and Queen.

Homecoming Queen Kaitlyn Myers, who wore a delightful gold gown for her walk, is the daughter of Renee and Jared Myers. She has an older sister Madi, younger sister Raegan, and younger brother Xander.

She is involved with Student Council, Spanish & Art Club, National Honor Society, Volleyball, and Basketball. Her hobbies include sleeping, working, hanging out with family and friends, and watching Netflix. This strong-willed, independent and understanding senior said her favorite food is Chicken Alfredo.

Her ideal Saturday night is hanging out with her friends and boyfriend. Her favorite TV Show is “Outer Banks” and her favorite movie is “How the Grinch Stole Christmas.”

If she could travel anywhere, she would go to Italy because they have good food and beautiful places. Her plans for the future are to go to the University of Toledo for nursing, graduate, get a bunch of dogs, get married, and start a family.

Homecoming King Levi Barnum is the son of Sue and Dave Barnum. Levi has two older sisters, Ashley and Sara, and an older brother Jakob.

He is involved with Football, Basketball and Baseball. His hobbies include playing sports with the boys and hanging out with his girlfriend. This bold, athletic and goofy senior said his favorite food is lobster Mac & cheese.

If he was stranded on an island, he would bring Joe Rogan, Jack Sparrow, and his girlfriend’s dog. His ideal Saturday night includes watching college football with his friends and girlfriend.

His favorite movie is “That’s My Boy.” He would like to travel to the Bahamas just because. Levi’s plans for the future include attending the Federal Aerospace Institute then starting a family.

The class also thanked Mr. Dave Schultz, Mr. Nate Johnson, Mr. Kent Holsopple, Mrs. Paula Short, the custodial staff, as well as all parents and all student council members who helped with the preparation for this year’s Homecoming festivities.

They all took their seats in the bleachers for the game against Montpelier and cheered as loud as possible for their favorite team, Stryker Panthers.

The Homecoming Dance was held on Saturday with a great turnout and delightful décor. All in all, it was a memorable weekend for all who got to attend and especially for those who were chosen to be in the Homecoming Court. 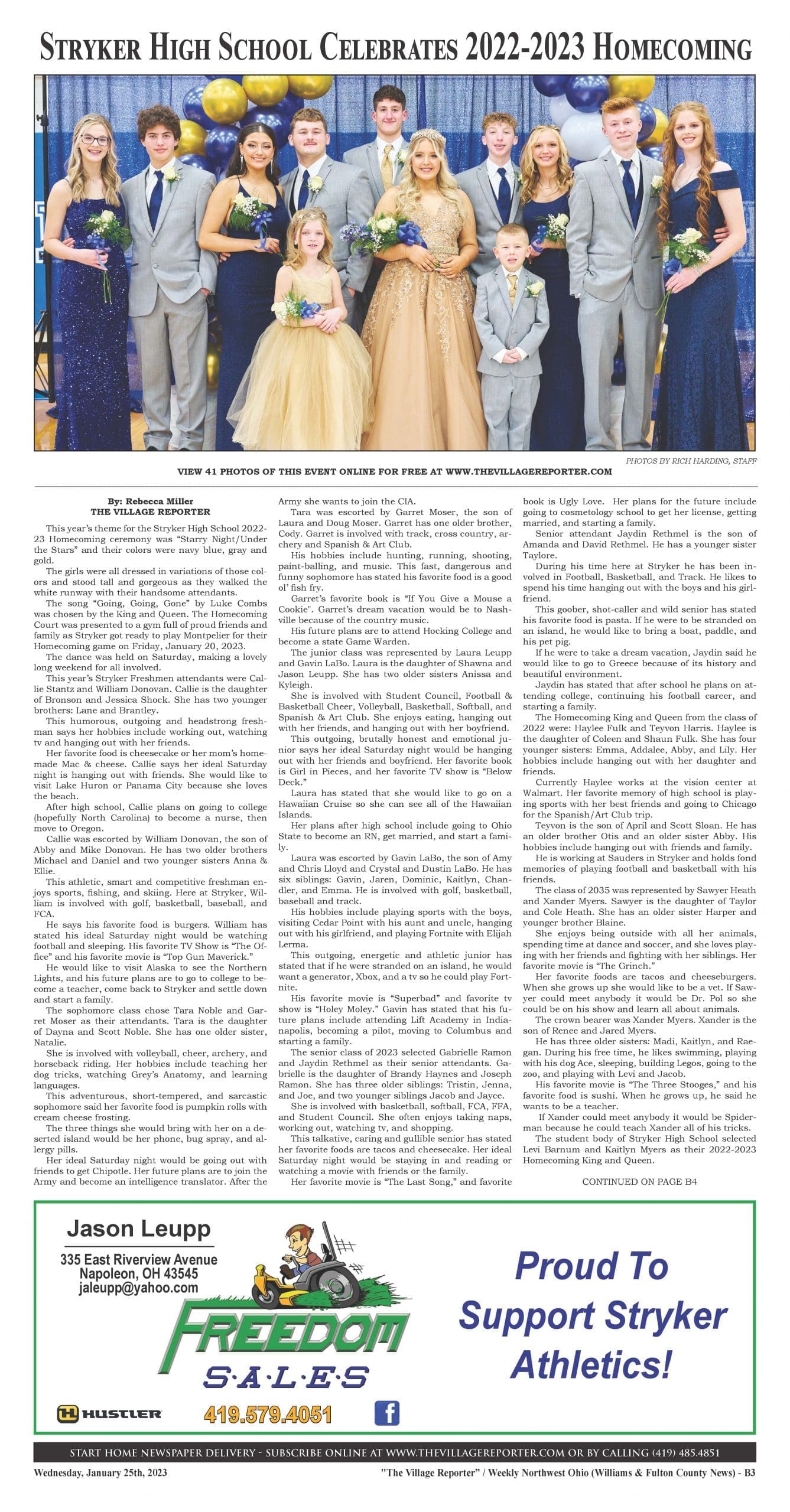 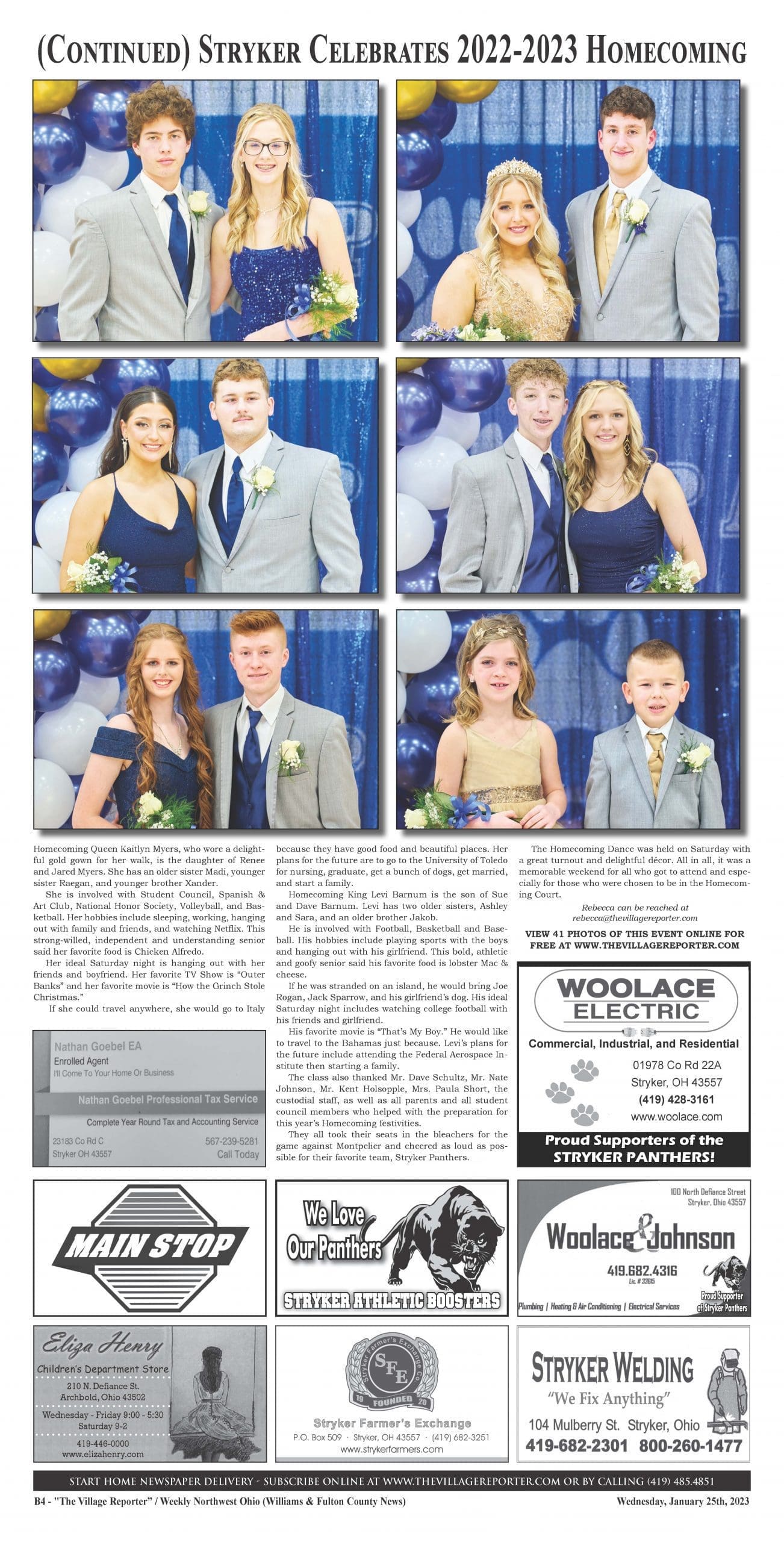